Comments (0)
Add to wishlistDelete from wishlist
Cite this document
Summary
The author of the current paper casts light upon the fact that in an economy without an external sector, both the money market and the commodity market behave according to the principles of the classical model. A few assumptions for the classical model: prices & wages are perfectly flexible…
Download full paperFile format: .doc, available for editing
HIDE THIS PAPERGRAB THE BEST PAPER91.7% of users find it useful 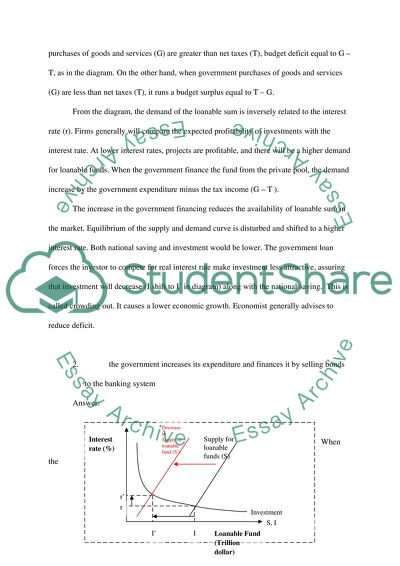 Extract of sample "Economical Strategy of the Government"

Download file to see previous pages From the diagram, the demand of the loanable sum is inversely related to the interest rate (r). Firms generally will compare the expected profitability of investments with the interest rate. At lower interest rates, projects are profitable, and there will be a higher demand for loanable funds. When the government finances the fund from the private pool, the demand increase by the government expenditure minus the tax income (G - T ).
The increase in government financing reduces the availability of loanable sum in the market. Equilibrium of the supply and demand curve is disturbed and shifted to a higher interest rate. Both national saving and investment would be lower. The government loan forces the investor to compete for real interest rate make investment less attractive, assuring that investment will decrease (I shift to I' in the diagram) along with the national saving. This is called crowding out. It causes lower economic growth. Economist generally advises reducing the deficit.
When the government switched from public to bank for credit, the supply of loanable fund to the market reduced. This thus causes a shift of the supply line to the left as in the diagram. The result of the reduction of the loanable fund is the increase in the interest rates of the loan. Private sector or firm will try to reduce their loan due to the high interest. There will not be a lot of projects going on and as a consequence, the investment in the country will drop. Both situation 1 and 2 would result in inflation as interest rate increased.
When money falls from a helicopter, the supply of money or the saving hold by the public in the market increases. In the diagram, this is illustrated by the shift of the supply curve (S) to the right (S'). The household expenditure might increase due to the increase in saving. Thus, the interest rate reduces (from r to r') and the demand for loanable funds increases (from I to I'). From the reduction of interest rate, more loan will be taken out to construct development projects. This is a situation where the money in the market increase without causing inflation.
Scenario II In the same economy the money market adheres to the principles of the classical model but the commodity market displays a substantial amount of Keynesian unemployment with stable prices.
A few assumptions for Keynesian model: prices & wages are fixed at a given level at these price & wage levels, there is involuntary unemployment (there are workers without a job who would like to work at the going market real wage). ...Download file to see next pagesRead More
Share:
Cite this document
(Economical Strategy of the Government Assignment, n.d.)
Economical Strategy of the Government Assignment. Retrieved from https://studentshare.org/macro-microeconomics/1533071-macroeconomics-assignment

“Economical Strategy of the Government Assignment”, n.d. https://studentshare.org/macro-microeconomics/1533071-macroeconomics-assignment.
Comments (0)
Click to create a comment or rate a document

CHECK THESE SAMPLES OF Economical Strategy of the Government

...Economical Concepts Insert Economical Concepts Microeconomics refers to learning of the decisions made by individuals and businesses concerning the distribution of resources and costs of products and services. This includes taxes and rules established by governments. Macroeconomics conversely is the subject of economics that examines the performance of the financial system as a complete and not only on precise organizations but also to the whole industries and financial systems (Thompson, 2002). Therefore, it examines wide range of economical prodigy like Gross National Product (GDP) and how modifications distressed it in national income, unemployment, growth rate, and cost levels. The New Right of economics came to power in late 1970s...
2 Pages(500 words)Assignment

Let us look at the trends observed in the business of the steel industry. The trend in the steel industry is very dynamic and always impacted by internal and extraneous factors. For almost 50 years the United States of America reigned in the industry of steel production, almost half of the entire p...
8 Pages(2000 words)Case Study
sponsored ads
Save Your Time for More Important Things
Let us write or edit the assignment on your topic "Economical Strategy of the Government" with a personal 20% discount.
GRAB THE BEST PAPER

Let us find you another Assignment on topic Economical Strategy of the Government for FREE!