Comments (0)
Add to wishlist Delete from wishlist
Cite this document
Summary
This fairly recent article culled from The Economist deals primarily with how an unusually strong Latin American economy will soon be subject to the global financial crunch spurred by the current U.S. housing crisis.The reading dwells on just how the Latin American markets will react once the implications begin to be felt,hence the title of the article…
Download full paper File format: .doc, available for editing
HIDE THIS PAPERGRAB THE BEST PAPER93.3% of users find it useful 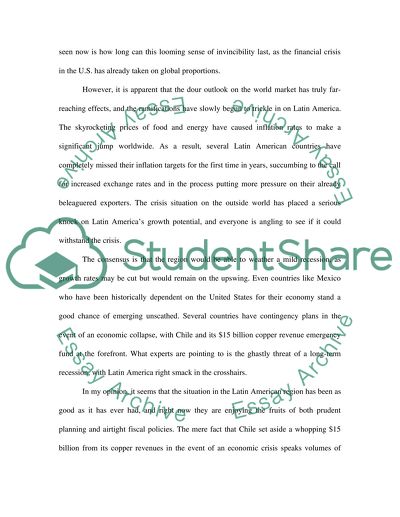 "On a Coming Test Of Virtue" This fairly recent article culled from The Economist deals primarily with how an unusually strong Latin American economy will soon be subject to the global financial crunch spurred by the current U.S. housing crisis. The reading dwells on just how the Latin American markets will react once the implications begin to be felt, hence the title of the article.
It starts out by pointing out that at the annual meeting of the Inter-American Development Bank (IDB), there was a seeming role reversal as the usually debt-saddled Latin firms were riding high on an economic upswing. This was in stark contrast to the dour mood of the American bankers, who are still reeling from the paralyzing effects of the subprime mortgage crisis.
Their optimism is not unwarranted, as Latin American economies have posted an aggregate 5% growth rate since 2004 - its best run in over four decades. This spurt has been fueled by low inflation rates, a huge influx of local and foreign investments, and a surplus on both current and fiscal accounts. Low interest rates in the United States have encouraged investments in higher yielding Latin American stocks and bonds. Junk bonds in the region are outperforming their U.S. counterparts by several percentage points, and in testament to this bullish outlook Peru's bonds had recently been raised to investment-grade. While figures vary from region to region, one thing is for certain - the U.S. credit crisis has had seemingly no ill effects on these robust economies. What remains to be seen now is how long can this looming sense of invincibility last, as the financial crisis in the U.S. has already taken on global proportions.
However, it is apparent that the dour outlook on the world market has truly far-reaching effects, and the ramifications have slowly begun to trickle in on Latin America. The skyrocketing prices of food and energy have caused inflation rates to make a significant jump worldwide. As a result, several Latin American countries have completely missed their inflation targets for the first time in years, succumbing to the call for increased exchange rates and in the process putting more pressure on their already beleaguered exporters. The crisis situation on the outside world has placed a serious knock on Latin America's growth potential, and everyone is angling to see if it could withstand the crisis.
The consensus is that the region would be able to weather a mild recession, as growth rates may be cut but would remain on the upswing. Even countries like Mexico who have been historically dependent on the United States for their economy stand a good chance of emerging unscathed. Several countries have contingency plans in the event of an economic collapse, with Chile and its $15 billion copper revenue emergency fund at the forefront. What experts are pointing to is the ghastly threat of a long-term recession, with Latin America right smack in the crosshairs.
In my opinion, it seems that the situation in the Latin American region has been as good as it has ever had, and right now they are enjoying the fruits of both prudent planning and airtight fiscal policies. The mere fact that Chile set aside a whopping $15 billion from its copper revenues in the event of an economic crisis speaks volumes of their foresight. They are recognizant of the fact that the good times are not here forever, and given the recent volatility of the global markets they provide a strategic framework which other Latin American countries are apt to emulate..
Will they survive the domino-like shockwaves of the United States housing crisis As mentioned earlier countries such as Mexico are heavily reliant on the U.S. for moving its exports and industrial production. What will happen when liquidity issues paralyze the mainland When the tourism stops and the exports are gathering dust on store shelves As the title of the article suggests, it truly is a test of virtue for the region. That given, $15 billion stashed around wouldn't necessarily hurt either. Read More
Share:
Tags
Cite this document
(“United States housing crisis Essay Example | Topics and Well Written Essays - 500 words”, n.d.)
United States housing crisis Essay Example | Topics and Well Written Essays - 500 words. Retrieved from https://studentshare.org/macro-microeconomics/1520740-united-states-housing-crisis

The housing industry is divided into residential, commercial and industrial segments. Economists define supply in terms of service units, that is, a physical unit can be deconstructed into the services that it helps provide. These housing unit services are considered as an unobservable theoretical construct. Housing stock depreciates making it qualitatively different from a brand new constructed building.
The owner, user/owner and renter comprise the demand side of the housing market while the renovators and developers comprise the supply side of the market. In order to implement the simple demand and supply analysis to the housing markets, several modifications have to be made to the standard microeconomic procedures and ass...
8 Pages (2000 words) Research Paper
sponsored ads
Save Your Time for More Important Things
Let us write or edit the essay on your topic "United States housing crisis" with a personal 20% discount.
GRAB THE BEST PAPER

Let us find you another Essay on topic United States housing crisis for FREE!