Comments (0)
Add to wishlistDelete from wishlist
Cite this document
Summary
This case study "Keynesian Stabilization Policy" outlines the basic tenets of Keynesian stabilization policy as formulated and defended by John Maynard Keynes, with particular attention to the economic realities of the United Kingdom in the 1930s. Keynes claimed that demand buoyed economies.  …
Download full paperFile format: .doc, available for editing
HIDE THIS PAPERGRAB THE BEST PAPER92.4% of users find it useful 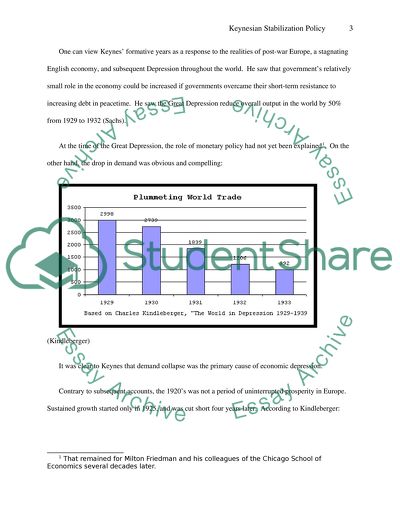 Download file to see previous pages John Maynard Keynes grew up in and attended Cambridge. He was a prominent member of the Bloomsbury Group, which was a literary group in London which, among other things, espoused socialist and interventionist solutions to economic and social problems. Keynes' experience during and after World War II in the Treasury helped to form his ideas about pricing, demand and monetary policy. He predicted hyperinflation in Germany as a result of the unrealistic demands of the Versailles Treaty of 1919. Keynes supported the theory of "pump priming" during the depression of the 1930s, which was formalized in his magnum opus of 1936, The General Theory of Employment, Interest and Money (Keynes).
One can view Keynes' formative years as a response to the realities of post-war Europe, a stagnating English economy, and subsequent Depression throughout the world. He saw that the government's relatively small role in the economy could be increased if governments overcame their short-term resistance to increasing debt in peacetime. He saw the Great Depression reduce overall output in the world by 50% from 1929 to 1932 (Sachs).
Contrary to subsequent accounts, the 1920s was not a period of uninterrupted prosperity in Europe. Sustained growth started only in 1925, and was cut short four years later. According to Kindleberger:
Recovery from the First World War was hindered in Europe by the loss of the cream of its youth and the relative setback to its position owing to the stimulus to economic growth in the dominions, Japan and the United States2.
Thus Keynes' entire adult career saw only a short period of nearly full employment, preceded and followed by periods of stagflation and outright depression. The respective governments' response to the economies' poor performance was fiscal restraint which, in Keynes' view, was clearly not working.
The Fundamentals of Classic Keynesian Theory
Keynes claimed that demand buoyed economies. Central to his theory was that demand from both the private and the public sector was essentially the same. To the extent that the private sector did not provide demand, the public sector could increase demand in order to keep the economy humming. Keynes felt that inflation was not a major problem unless the economy approached "full" employment, which was a much higher number than attributed by most economists at the time.
Keynes' theories included three basic tenets:
1. Aggregate demand is composed of government and private demand. Both stimulate the economy when they increase. Aggregate demand is not inflationary unless it increases at a time when the economy is fully employed.
2. Changes in demand do not affect prices, at least in the short term. Their main effect is on output and employment. Prices do not change readily-particularly in the case of wages-to accommodate demand.
3. Since wages respond slowly (both up and down), unemployment acts as a "balancing" mechanism. ...Download file to see next pagesRead More
Share:
Tags
Cite this document
(Keynesian Stabilization Policy Case Study Example | Topics and Well Written Essays - 1500 words, n.d.)
Keynesian Stabilization Policy Case Study Example | Topics and Well Written Essays - 1500 words. https://studentshare.org/macro-microeconomics/1520528-keynesian-stabilization-policy
(Keynesian Stabilization Policy Case Study Example | Topics and Well Written Essays - 1500 Words)
Keynesian Stabilization Policy Case Study Example | Topics and Well Written Essays - 1500 Words. https://studentshare.org/macro-microeconomics/1520528-keynesian-stabilization-policy.
“Keynesian Stabilization Policy Case Study Example | Topics and Well Written Essays - 1500 Words”. https://studentshare.org/macro-microeconomics/1520528-keynesian-stabilization-policy.
Comments (0)
Click to create a comment or rate a document

Let us find you another Case Study on topic Keynesian Stabilization Policy for FREE!