Comments (0)
Add to wishlist Delete from wishlist
Cite this document
Summary
In the beginning of the twentieth century, three groups exerted their pressure on the American government — the strategists, the missionaries and the businessmen. The businessmen, though they had been reluctant to go to war, had a stake in the trade with Japan and China, and were looking for new markets…
Download full paper File format: .doc, available for editing
HIDE THIS PAPERGRAB THE BEST PAPER94.6% of users find it useful 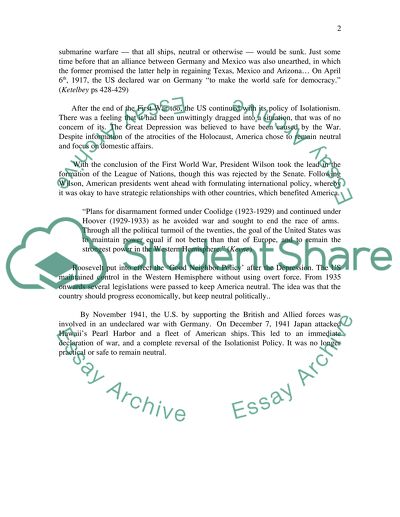 Download file to see previous pages The evidence of American expansionist ambitions, however, was seen in the following. Cuba remained under American occupation till 1902, when it received permanent naval bases and rights of intervention. Puerto Rico was annexed and its people were given American citizenship in 1917. Guam and the Philippines were also annexed. The Philippines were given partial self-government in 1907, and in 1916 a promise of independence if they achieved a stable democratic government (Ketelbey p 673).
Thus the US developed her own individual power and interests in strategic locations across the world. But to the ferment in Europe, she maintained a distance, tinged with moral disapproval. This attitude was not inconsistent with the role of mediator, which she played (e.g in the Russo-Japanese War of 1905; the holding of the Algericas Conference in 1906 to ease tensions between France and Germany.) This was to a great extent due to the initiative of Theodore Roosevelt.
When Woodrow Wilson took over the president-ship, he continued to keep the US neutral, refusing to intervene in the crisis of 1914. When war was declared, Wilson declared neutrality. In fact in 1916, Wilson came back for another term on the electoral plank of having kept America ‘out of the war’. However, it soon dawned on the American people that the massive redistribution of world power would affect the country. And America had to join the war.
As a matter of fact, the sequence of events that led America to openly declare hostilities against Germany speaks of extreme patience on the part of Wilson. America had a large number of people of German origin and did not wish to enter the war. In 1915, an American ship was sunk, Americans traveling in British ships were drowned, and then the Lusitania was torpedoed. Wilson sent a strong note to Germany citing a violation of international law. In 1916, an English ship, which had on board seventy-five American passengers was torpedoed; in 1917 there was an announcement of unrestricted submarine warfare - that all ships, neutral or otherwise - would be sunk. Just some time before that an alliance between Germany and Mexico was also unearthed, in which the former promised the latter help in regaining Texas, Mexico and Arizona On April 6th, 1917, the US declared war on Germany "to make the world safe for democracy." (Ketelbey ps 428-429)
After the end of the First War too, the US continued with its policy of Isolationism. There was a feeling that it had been unwittingly dragged into a situation, that was of no concern of its. The Great Depression was believed to have been caused by the War. Despite information of the atrocities of the Holocaust, America chose to remain neutral and focus on domestic affairs.
With the conclusion of the First World War, President Wilson took the lead in the formation of the League of Nations, though this was rejected by the Senate. Following Wilson, American presidents went ahead with formulating international policy, whereby it was okay to have strategic relationships with other countries, ...Download file to see next pages Read More
Share:
Tags
Cite this document
(“Determine whether the First World War started a slow change in Essay”, n.d.)
Retrieved from https://studentshare.org/macro-microeconomics/1516439-determine-whether-the-first-world-war-started-a-slow-change-in-attitude-toward-the-traditional-american-foreign-policy-of-isolationism

(Determine Whether the First World War Started a Slow Change in Essay)
https://studentshare.org/macro-microeconomics/1516439-determine-whether-the-first-world-war-started-a-slow-change-in-attitude-toward-the-traditional-american-foreign-policy-of-isolationism.

“Determine Whether the First World War Started a Slow Change in Essay”, n.d. https://studentshare.org/macro-microeconomics/1516439-determine-whether-the-first-world-war-started-a-slow-change-in-attitude-toward-the-traditional-american-foreign-policy-of-isolationism.
Comments (0)
Click to create a comment or rate a document

The first assignment was about the physical and social environments of the workplace and in that assign...
8 Pages (2000 words) Assignment

Management often follows a “change management process” to change the existing process or activity.
Change management is a systematic approach for dealing with change that takes place in the organization as well as at the individual level. Such change management comprises of three aspects: adapting change, controlling it and finally affecting it. These three aspects of change management were well explained in three stages of change model given by Lewin (1952) and the three stages are “unfreezing”, “change” & “refreezing” (Orlikowski & Hofman, 1997). Another model for change was introduced by Prosci after conducting a research on more than 1000 companies from 59 countries....
7 Pages (1750 words) Case Study

It is noteworthy that the legitimization of African American philosophy was brought to life with what we call “African American political activism” in the 1960s. From that time, this discipli...
6 Pages (1500 words) Essay

Part A: The first novel is a first-person narrative, in which Ditie, a man of small stature, endures what might seem like a hard life in wartime Prague. Although at first reading, Ditie does not seem to have a complex or hang-up about his size, most of his experiences and stories are tinted with descriptions and narrations that seem to have this aspect of his appearance in the background. All through the book, the reader is aware this is a very small man who, although he does not try to compensate overtly, and seems all in all to accept his short...
9 Pages (2250 words) Book Report/Review

2. “The calm, deliberate composure with which he spoke of his late deeds and intentions, the expression of his fiendlike face when excited by enthusiasm, still bearing the stains of the blood...
9 Pages (2250 words) Assignment

The results revealed that the employees had no incentive for working in an innovative way and they were not compensated in the right manner. The clients were not given any incentive to return, therefore, most of them went to the competition. The employees working over three years were given special benefits if they sign a contract to work for the organization for at least 3 more years. Employees were given training sessions for better customer experience. Informal dinner or lunch each was scheduled each month in order to enhance the level of communication in the organization. Ten months after the implementation of these changes, the consultants returned for evaluation and found that the results have shown a successful change in th...
7 Pages (1750 words) Case Study

Climate change and globalization are intricately linked. With the passage of time, many environmental issues, like global warming, have...
6 Pages (1500 words) Coursework
sponsored ads
Save Your Time for More Important Things
Let us write or edit the essay on your topic "Determine whether the First World War started a slow change in attitude toward the traditional American foreign policy of Isolationism" with a personal 20% discount.
GRAB THE BEST PAPER

Let us find you another Essay on topic Determine whether the First World War started a slow change in attitude toward the traditional American foreign policy of Isolationism for FREE!