Comments (0)
Add to wishlist Delete from wishlist
Cite this document
Summary
This study "The Theory of Comparative Advantage: Understanding the Gain " explains the benefits of trade between two countries without any barrier even if one is more efficient at producing goods or services. The study considers two nations “Nation A” and “Nation B” and both producing two goods, cloth…
Download full paper File format: .doc, available for editing
HIDE THIS PAPERGRAB THE BEST PAPER97.7% of users find it useful 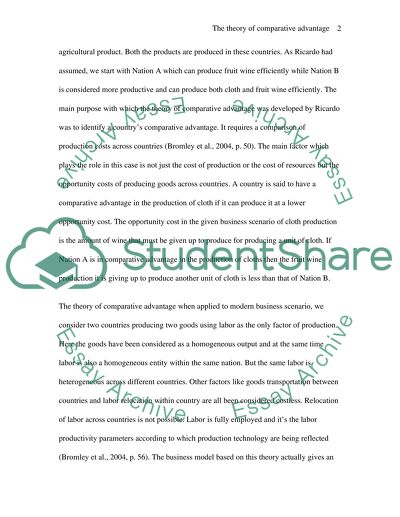 Extract of sample "The Theory of Comparative Advantage: Understanding the Gain"

Download file to see previous pages  The terms like comparative or relative advantages have often failed to create the same impression as that of absolute advantage and hence this concept of comparative advantage has often been misunderstood. The concept of absolute advantage as described by Adam Smith suggests that a commodity produced cheaper by a foreign nation should rather be bought from that nation and the resources available should be employed in a way which we have some advantage (Bromley et al., 2004, p. 46). This simplicity of absolute advantage has made the concept very popular and easy to comprehend. Moving on to the concept of the comparative advantage given by David Ricardo; the concept is not at all intuitive at first go and will require explicit numerical examples for a better explanation.
To begin, we consider two nations "Nation A" and "Nation B" and both producing two goods, cloth which is a manufactured good and fruit wine which can be considered as an agricultural product. Both the products are produced in these countries. As Ricardo had assumed, we start with Nation A which can produce fruit wine efficiently while Nation B is considered more productive and can produce both cloth and fruit wine efficiently. The main purpose with which the theory of comparative advantage was developed by Ricardo was to identify a country’s comparative advantage. It requires a comparison of production costs across countries (Bromley et al., 2004, p. 50). The main factor which plays the role, in this case, is not just the cost of production or the cost of resources but the opportunity costs of producing goods across countries.
A country is said to have a comparative advantage in the production of cloth if it can produce it at a lower opportunity cost. The opportunity cost in the given business scenario of cloth production is the amount of wine that must be given up to produce for producing a unit of cloth. If Nation A is in comparative advantage in the production of cloths then the fruit wine production it is giving up to produce another unit of cloth is less than that of Nation B.
The theory of comparative advantage when applied to a modern business scenario, we consider two countries producing two goods using labor as the only factor of production. Here the goods have been considered as a homogeneous output and at the same time, labor is also a homogeneous entity within the same nation. But the same labor is heterogeneous across different countries. Other factors like goods transportation between countries and labor relocation within the country are all been considered costless. Relocation of labor across countries is not possible. Labor is fully employed and it's the labor productivity parameters according to which production technology is being reflected (Bromley et al., 2004, p. 56).   ...Download file to see next pages Read More
Share:
Tags
Cite this document
(The Theory of Comparative Advantage: Understanding the Gain Case Study, n.d.)
The Theory of Comparative Advantage: Understanding the Gain Case Study. Retrieved from https://studentshare.org/macro-microeconomics/1500854-the-theory-of-comparative-advantage

“The Theory of Comparative Advantage: Understanding the Gain Case Study”, n.d. https://studentshare.org/macro-microeconomics/1500854-the-theory-of-comparative-advantage.
Comments (0)
Click to create a comment or rate a document

CHECK THESE SAMPLES OF The Theory of Comparative Advantage: Understanding the Gain

ETHICS AND DIVERSE DEFENITIONS: One of the Dilemmas of the civilized human society was the fight between the soul and the flesh or rather the body and desires. The question is how to divert human energy in an intelligent, controlled way? Searching answers to this question one lands in the premise of ethics, personal as well as social. Ethics (English)...
11 Pages (2750 words) Case Study

In order to compare the welfare system of the three proposed countries, it is important to first develop a comparative method that would guide in comparing the three states. For the purpose of this paper, a binary comparison would be conducted. The implicit comparison would deal with Britain while the explicit comparison would explore the USA and Canada. Thereby a small N’ study would be used, that is, of three countries.
The three countries selected to share a similarity in the form that these countries are a welfare state. This is when welfare is mainly funded by the state. While the USA and Canada focus on the liberal welfare state, the welfare state of the UK is not quite defined.
The comparison of the welfare...
8 Pages (2000 words) Term Paper
sponsored ads
Save Your Time for More Important Things
Let us write or edit the case study on your topic "The Theory of Comparative Advantage: Understanding the Gain" with a personal 20% discount.
GRAB THE BEST PAPER

Let us find you another Case Study on topic The Theory of Comparative Advantage: Understanding the Gain for FREE!