Free Trade Is Beneficial and Should Be Promoted - Essay Example

Comments (0)
Add to wishlist Delete from wishlist
Cite this document
Summary
International trade defines the exchange of goods and services across international and regional borders. Traders operate under different domestic laws and regulations that involve trade agreements. This paper argues that free trade is a better option for the contemporary global economy…
Download full paper File format: .doc, available for editing
HIDE THIS PAPERGRAB THE BEST PAPER94.4% of users find it useful 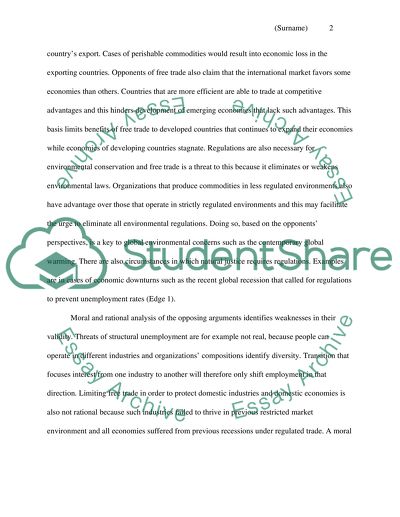 Extract of sample "Free Trade Is Beneficial and Should Be Promoted"

Download file to see previous pages Diversified views exist against free trade. One of such arguments is the risk of structural unemployment that a domestic economy may experience when it opens up its borders to free trade. According to the perspective, free trade may make some industries more competitive than others may and therefore shifts investments and demand for labor to the more competitive industries and ventures. The consequence is the dissertation of some industries that may render experts in those industries jobless. Finding jobs with redundant skills, especially at old age may be a challenge and a threat to people’s welfare and economic growth. It is also argued that free trade exposes an economy to trends in other economies and to global economic trends. Inflation in one country may induce inflation in another country because traded goods from the affected country transfer the inflation effect into the recipient economy. Similarly, recession in one economy may reduce its potentials to import commodities and reduce demand for another country’s export. Cases of perishable commodities would result in economic loss in the exporting countries. Opponents of free trade also claim that the international market favors some economies than others. Countries that are more efficient are able to trade at competitive advantages and this hinders the development of emerging economies that lack such advantages. This basis limits the benefits of free trade to developing countries that continue to expand their economies while economies of developing countries stagnate. Regulations are also necessary for environmental conservation and free trade is a threat to this because it eliminates or weakens environmental laws. Organizations that produce commodities in less regulated environments also have an advantage over those that operate in strictly regulated environments and this may facilitate the urge to eliminate all environmental regulations. Doing so, based on the opponents’ perspectives, is a key to global environmental concerns such as contemporary global warming. There are also circumstances in which natural justice requires regulations. Examples are in cases of economic downturns such as the recent global recession that called for regulations to prevent unemployment rates (Edge 1). A moral and rational analysis of the opposing arguments identifies weaknesses in their validity. Threats of structural unemployment are for example not real because people can operate in different industries and organizations’ compositions identify diversity. The transition that focuses on interest from one industry to another will therefore only shift employment in that direction. Limiting free trade in order to protect domestic industries and domestic economies is also not rational because such industries failed to thrive in the previously restricted market environment and all economies suffered from previous recessions under-regulated trade. A moral perspective, rather than rule-based approach can also help in resolving issues such as environmental protection and protection of employment during the economic crisis (Edge 1). A review of arguments for free trade, however, establishes social and economic benefits to all stakeholders. Free trade promotes productivity that benefits all economies through the exchange. Induced level of efficiency towards lower prices and diversified products also increases cumulative profits of producing economies and improves the utility of consumers in all economies. This is because commodities are produced at low costs that retain desirable profit margins at lower prices and this together with product diversification expands consumers’ choices and improves derived satisfaction. ...Download file to see next pages Read More
Share:
Tags
Cite this document
(Free Trade Is Beneficial and Should Be Promoted Essay, n.d.)
Free Trade Is Beneficial and Should Be Promoted Essay. Retrieved from https://studentshare.org/macro-microeconomics/1496391-argument-essay

“Free Trade Is Beneficial and Should Be Promoted Essay”, n.d. https://studentshare.org/macro-microeconomics/1496391-argument-essay.
Comments (0)
Click to create a comment or rate a document

The protests according to the President of Mexico came from people who were either ignorant of the exact situation despite having a genuine concern and hence were swayed by emotions or by those who had become insecure in their jobs with globalization.
WTO claimed that the first charge was a misconception. It claimed that it opposed measures that use environmental protection as a guide for the protection of domestic industries against foreign competition and not to the measures to protect the environment as the allegations suggested. WTO debated that under its rules, environmental protection measures are prohibited only if those measures treat foreign producers more harshly than domestic producers. It was later found as seen i...
10 Pages (2500 words) Coursework

“Why, for instance,” he is credited as having continued along these same lines, “should it be said that liberty of the press shall not be restrained when no power is given by which restrictions may be imposed? (136)” Hamilton’s argument was lost to the states, and the first ten amendments of the Constitution reflect the state’s insistence for a Bill of Rights, and first on the Bill of Rights is the right to free speech (137). Neither Hamilton, who was during his life a proliferate letter writer, expressing his views on every subject of the day and many which were not subject to discussion at all (Hamilton 1911, 62); nor the represents of the states who held out against ratifying the Constitution...
7 Pages (1750 words) Report

Air is humankind’s natural source of respiratory Oxygen. Its preservation may have been openly disregarded so that the current generation has to face up to the maintenance of it...
12 Pages (3000 words) Term Paper

Austria or you may call is the Republic of Austria in official terminology is located in Central Europe. Although the population figures do not touch the danger limit but the talent and resources are worthwhile there. Germany and Hungry are also near this region. Italy is in the south of Austria. Switzerland will be seen in the west. So, now you can realize the importance of this region clearly.
The GDP is also impressive here. You can say the economy is strong and it has much depth. The strong social market economy is the result of development and proper management by the government (DArt & Turner 2008). Traders find flexibility in business operations. Labor has a positive approach to work and jobs.
There was a tren...
9 Pages (2250 words) Term Paper

They, therefore, believe that internal and external factors affect the chances of a person being subject to a crime. The situation at which a person commits a crime also forms the basis of the determinist approach of causes of crimes.
Several theories elaborate on the factors that dispose of different people toward crimes. The classical theory explains that crimes occur when their benefits outdo the costs or consequences of the crime. The theory of Routine Activities suggests that a crime likely occurs if a motivated offender finds an attractive target and no appropriate guardianship in place. Various biological factors also influence the causes of crimes as evident in the discussion.
One of the major assumptions of the...
8 Pages (2000 words) Term Paper
sponsored ads
Save Your Time for More Important Things
Let us write or edit the essay on your topic "Free Trade Is Beneficial and Should Be Promoted" with a personal 20% discount.
GRAB THE BEST PAPER

Let us find you another Essay on topic Free Trade Is Beneficial and Should Be Promoted for FREE!