Comments (0)
Add to wishlist Delete from wishlist
Cite this document
Summary
The following research paper under the title "Capitalism and Social Progress the Future of Society in a Global Economy" deals with two major economic systems that were in place throughout the world in the 20th century, namely, capitalism and communism…
Download full paper File format: .doc, available for editing
HIDE THIS PAPERGRAB THE BEST PAPER97.8% of users find it useful 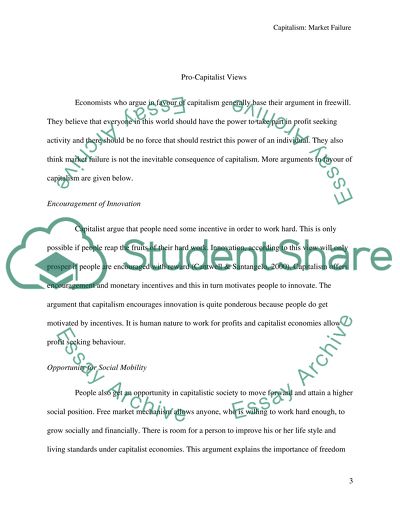 Download file to see previous pages In communism, people do not have a right to private property and state intervenes in the economy regularly. There are many subsets of both capitalism and communism but mainly these two economic systems exist. The economic crises of the 20th century have caused many people to think differently about capitalism and many reservations are raised. In this paper, we will critically evaluate whether market failure is the inevitable consequence of capitalism. We will discuss both pro-capitalist and anti-capitalist arguments in order to critically evaluate the above statement. Capitalism: An Overview The roots of capitalism lie in mercantilism which was prevalent between the 16th and 18th century (Burnham, 2003). Mercantilism was basically a system that was based on profit-seeking trades. Adman Smith in the 18th century gave the basic tenants of capitalism and his ‘invisible hand’ theory became popular (Buchan, 2006). Adam Smith argued that markets can balance themselves and there is no need for government intervention. Capitalism became widely accepted in the 20th century and many countries had capitalist economies. Now we will discuss the arguments in favor of capitalism.
Pro-Capitalist Views
Economists who argue in favor of capitalism generally base their argument in freewill. They believe that everyone in this world should have the power to take part in the profit-seeking activity and there should be no force that should restrict this power of an individual. They also think market failure is not the inevitable consequence of capitalism. More arguments in favor of capitalism are given below.
Encouragement of Innovation
Capitalist argue that people need some incentive in order to work hard. This is only possible if people reap the fruits of their hard work. Innovation, according to this view will only prosper if people are encouraged with reward (Cantwell & Santangelo, 2000). Capitalism offers encouragement and monetary incentives and this, in turn, motivates people to innovate. The argument that capitalism encourages innovation is quite ponderous because people do get motivated by incentives. It is human nature to work for profits and capitalist economies allow profit-seeking behavior. Opportunity for Social Mobility People also gets an opportunity in capitalistic society to move forward and attain a higher social position. The free market mechanism allows anyone, who is willing to work hard enough, to grow socially and financially. There is room for a person to improve his or her lifestyle and living standards under capitalist economies. This argument explains the importance of freedom in human life. Human beings need the freedom to live a healthy and satisfactory life, therefore, they should have freedom in their economic life as well. The government, therefore, should not intervene in matters of economy. Other economic systems do not allow social mobility (Fitzpatrick, 2002) therefore capitalism is to be preferred. Consistent with Human Behaviour It is argued that capitalism is consistent with human behavior, therefore, it cannot lead to market failure. Markets are made by people and if a system is in place that is consistent with human behavior and nature then it cannot fail. Fighting and surviving is the way through which human beings have survived since their ancient times so this makes it clear that it is human behavior to fight in order to survive. The same principle if applied to the economic system can never fail because it will be based on human nature. ...Download file to see next pages Read More
Share:
Tags
Cite this document
(Capitalism and Social Progress the Future of Society in a Global Research Paper, n.d.)
Capitalism and Social Progress the Future of Society in a Global Research Paper. Retrieved from https://studentshare.org/macro-microeconomics/1431065-business-environment

“Capitalism and Social Progress the Future of Society in a Global Research Paper”, n.d. https://studentshare.org/macro-microeconomics/1431065-business-environment.
Comments (0)
Click to create a comment or rate a document

There is a need, however, to prove or disprove Freud’s contention against religion because to perpetuate that ‘illusion’ blindly without ascertaining its truth or falsity is living in hope under a lie. Fortunately, psychologists and historians, contemporary to and subsequent to Freud, had offered proofs and arguments against Freud’s sweeping generalization of religion pointing to its unsoundness and perhaps, falsity.
In his book The Future of an Illusion, Sigmund Freud referred to religion as an illusion. Illusion, according to him, is fundamentally underpinned by human wishes as opposed to an error being essentially a consequence of mistake (213). Religion is an illusion because it is founded upon the...
7 Pages (1750 words) Book Report/Review

For centuries, ethics has been a crucial and significant component of human societies that contributed enormously to the creation of norms and values through religious influences, as well as through the contribution of intellectuals and philosophers in society. Unfortunately, nowadays, it is an observation that individuals, organizations, and even nations have commenced overlooking the phenomenon of ethics in their practices, specifically in the business sector that has become the major stakeholder confronting criticisms related to ethical practices. Critics (Crane, pp. 23-29, 2007) argue that business ethics has now become a component limited to theoretical policies and frameworks of business organizations, and such principles an...
10 Pages (2500 words) Case Study

...). CURRENT GLOBAL MECHANISMS The global initiatives of employee information and consultation started with the concept of ‘global social dialogue’ that involves framework agreements between individual multinational corporations and global union federations (International Labour Office). These frameworks have procedures in dealing with disputes that are not locally resolved. However, the implementation of these framework agreements is merely regulated by the management side and the global union federations, which would largely depend on their close collaboration (International Labour Office). In addition to that, Seifert claims that: The legal character of these international Framework Agreements is not easy to discern. Clearly...
9 Pages (2250 words) Coursework
sponsored ads
Save Your Time for More Important Things
Let us write or edit the research paper on your topic "Capitalism and Social Progress the Future of Society in a Global Economy" with a personal 20% discount.
GRAB THE BEST PAPER

Let us find you another Research Paper on topic Capitalism and Social Progress the Future of Society in a Global Economy for FREE!