Comments (0)
Add to wishlistDelete from wishlist
Cite this document
Summary
Name Monopoly is against Public Interest First of all, we need to understand what is meant by monopoly to have a basic idea. Pure monopoly has been defined with rigorous requirements. The definition states that only one firm can exist; the monopolist must be the only operator in the town…
Download full paperFile format: .doc, available for editing
HIDE THIS PAPERGRAB THE BEST PAPER97.3% of users find it useful 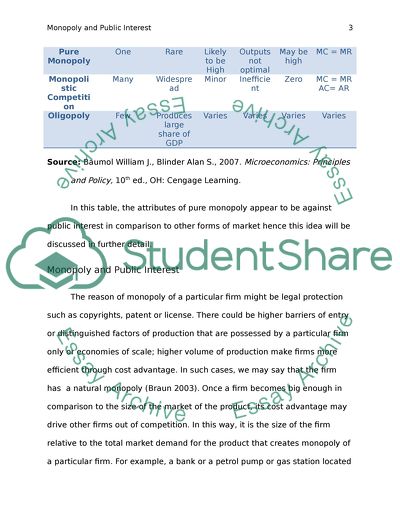 Extract of sample "Monopoly Is against Public Interest"

Download file to see previous pages The rigid requirements of pure monopoly make it rare in the real world. It has a number of unfavorable features due to which whenever the government sees that monopolization may occur, they intervene to prevent it or to limit monopolist’s pricing decision. Following is the comparison of different forms of market ATTRIBUTES OF DIFFERENT FORMS OF MARKET Market Form Number of Firms in the Market Frequency in Reality Entry Barriers Public Interest Results Long Run Profit Equilibrium condition Perfect Competition Very many Rare (if any) None Good Zero MC = MR = AC = AR = P Pure Monopoly One Rare Likely to be High Outputs not optimal May be high MC = MR Monopolistic Competition Many Widespread Minor Inefficient Zero MC = MR AC= AR Oligopoly Few Produces large share of GDP Varies Varies Varies Varies Source: Baumol William J., Blinder Alan S., 2007. Microeconomics: Principles and Policy, 10th ed., OH: Cengage Learning. In this table, the attributes of pure monopoly appear to be against public interest in comparison to other forms of market hence this idea will be discussed in further detail. Monopoly and Public Interest The reason of monopoly of a particular firm might be legal protection such as copyrights, patent or license. There could be higher barriers of entry or distinguished factors of production that are possessed by a particular firm only or economies of scale; higher volume of production make firms more efficient through cost advantage. In such cases, we may say that the firm has a natural monopoly (Braun 2003). Once a firm becomes big enough in comparison to the size of the market of the product, its cost advantage may drive other firms out of competition. In this way, it is the size of the firm relative to the total market demand for the product that creates monopoly of a particular firm. For example, a bank or a petrol pump or gas station located in a rural area may be natural monopolies due to its presence in a location where there is no competition (Eisenach, Lenard, Progress & Freedom Foundation (U.S.) 1999). Whether it is pure monopoly or natural monopoly the question arises, what might be the public interest? Theoretically, consumers want to get maximum benefit from their money or want to pay relatively the lowest price to get relatively highest benefit. Consumers also seek higher quality of products and consumption. They also look for a range products and manufacturers. Consumers may fail to rule the market as in monopoly they have only little or no alternatives available. Conventionally, monopoly is considered as a harmful market structure that brings unfavorable consequences to consumers and the economy at large. Competition is always encouraged in the market. The monopoly power of firms threatens the public interest. Monopolistic power is defined as the ability of a firm to earn higher profit by elevating and keeping the price of their products considerably above the levels at which those products would be offered in competitive market. Firm with monopolistic power always enjoys market dominance irrespective of the fact that they are pricing their products really high as they have no competitors to grab their share of market. The reason that goes against public interest in monopoly is always the higher level ...Download file to see next pagesRead More
Share:
Tags
Cite this document
(“Monopoly Is against Public Interest Essay Example | Topics and Well Written Essays - 1250 words”, n.d.)
Retrieved from https://studentshare.org/macro-microeconomics/1430605-monopoly
(Monopoly Is Against Public Interest Essay Example | Topics and Well Written Essays - 1250 Words)
https://studentshare.org/macro-microeconomics/1430605-monopoly.
“Monopoly Is Against Public Interest Essay Example | Topics and Well Written Essays - 1250 Words”, n.d. https://studentshare.org/macro-microeconomics/1430605-monopoly.
Comments (0)
Click to create a comment or rate a document

CHECK THESE SAMPLES OF Monopoly Is against Public Interest

The Aspects of Monopoly

On the other hand, pure competition is characterized by a large number of small competitors. The small competitors normally have no market control thus it only acts as an ideal market structure that sets standards for good results in the future.
A firm that is under pure competition may sell as much as it wishes with the current market price as long as it can produce at its original cost. However, the firm may achieve monopoly status due to economies of scale, government decree and resource ownership (Tucker 228).
The emergence of a monopolistic firm is normally influenced by economies of scale and decreased average cost. When a firm finds itself in a monopoly position, its average cost has to reduce overtime thus sellin...
7 Pages(1750 words)Term Paper
sponsored ads
Save Your Time for More Important Things
Let us write or edit the essay on your topic "Monopoly Is against Public Interest" with a personal 20% discount.
GRAB THE BEST PAPER

Let us find you another Essay on topic Monopoly Is against Public Interest for FREE!