Comments (0)
Add to wishlist Delete from wishlist
Cite this document
Summary
According to the essay findings, it can, therefore, be said that eliminating the dollar bill and replacing it with dollar coins should be one of the measures because the government will save the taxpayer more than $5 billion in the next 3 decades among other benefits…
Download full paper File format: .doc, available for editing
HIDE THIS PAPERGRAB THE BEST PAPER96.5% of users find it useful 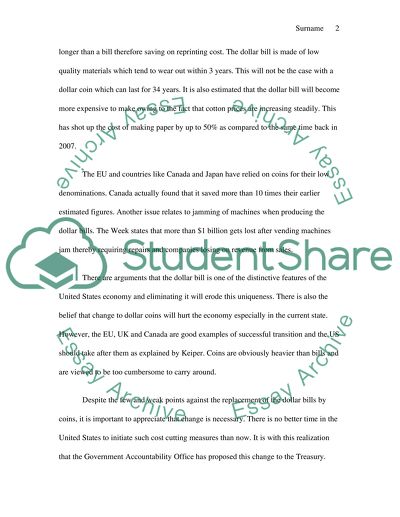 ﻿Use of Dollar Coins as Opposed to Dollar Bills in the US
The debate on whether to retain the one dollar bill or not has been with us for decades. However, in recent times more attention is shifting towards replacement of the dollar bill. The world economy and precisely that of the United States has been on a declining trend with the dollar losing its grip against other major world currencies. There is a general fiscal fever and an atmosphere of panic in Washington as Obama’s administration comes down with criticism of poor economic reform since the credit crunch hit in 2007. With the US budget deficit expected to reach the $1.5 trillion mark this year, the government is under immense pressure to initiate sustainable cost cutting measures. Eliminating the dollar bill and replacing it with dollar coins should be one of the measures because the government will save the tax payer more than $5 billion in the next 3 decades among other benefits.
Cutting on spending is the biggest priority that the US government has so as to set the economy back in motion. The government currently spends a great deal of money printing and circulating the dollar bills. It will actually take 31 cents less to produce a dollar coin as opposed to a dollar bill according to Fiegerman. A coin will definitely last longer than a bill therefore saving on reprinting cost. The dollar bill is made of low quality materials which tend to wear out within 3 years. This will not be the case with a dollar coin which can last for 34 years. It is also estimated that the dollar bill will become more expensive to make owing to the fact that cotton prices are increasing steadily. This has shot up the cost of making paper by up to 50% as compared to the same time back in 2007.
The EU and countries like Canada and Japan have relied on coins for their low denominations. Canada actually found that it saved more than 10 times their earlier estimated figures. Another issue relates to jamming of machines when producing the dollar bills. The Week states that more than $1 billion gets lost after vending machines jam thereby requiring repairs and companies losing on revenue from sales.
There are arguments that the dollar bill is one of the distinctive features of the United States economy and eliminating it will erode this uniqueness. There is also the belief that change to dollar coins will hurt the economy especially in the current state. However, the EU, UK and Canada are good examples of successful transition and the US should take after them as explained by Keiper. Coins are obviously heavier than bills and are viewed to be too cumbersome to carry around.
Despite the few and weak points against the replacement of the dollar bills by coins, it is important to appreciate that change is necessary. There is no better time in the United States to initiate such cost cutting measures than now. It is with this realization that the Government Accountability Office has proposed this change to the Treasury. GAO has stated that although the transition will take around 4 years, the US government will stand to save more than $522 annually thereafter.
Works Cited
Fiegerman, Seth. “Eliminating $1 Bills Could Save Billions.” Yahoo Finance. 9 March 2011. Web. 23 May 2011.
Keiper, Lauren. “Replacing Dollar Bill With Coins Could Save Billions: Government.” Reuters. 4 March 2011. Web. 23 May 2011.
The Week. “Time to get rid of $1 bills?” The Week. 10 March 2011. Web. 23 May 2011. Read More
Share:
Tags
Cite this document
(“Use of Dollar Coins as Opposed to Dollar Bills in the US Essay”, n.d.)
Use of Dollar Coins as Opposed to Dollar Bills in the US Essay. Retrieved from https://studentshare.org/macro-microeconomics/1423282-argumentative-essay

“Use of Dollar Coins As Opposed to Dollar Bills in the US Essay”, n.d. https://studentshare.org/macro-microeconomics/1423282-argumentative-essay.
Comments (0)
Click to create a comment or rate a document

Technology...
10 Pages (2500 words) Essay
sponsored ads
Save Your Time for More Important Things
Let us write or edit the essay on your topic "Use of Dollar Coins as Opposed to Dollar Bills in the US" with a personal 20% discount.
GRAB THE BEST PAPER

Let us find you another Essay on topic Use of Dollar Coins as Opposed to Dollar Bills in the US for FREE!