Comments (0)
Add to wishlistDelete from wishlist
Cite this document
Summary
This paper tries to evaluate the impact of the rapidly growing international tourism sector on the overall economic growth in China. To get a full picture of tourism analysis in relation to the direct and indirect factors, a 48 sector social accounting matrix (SAM) was constructed. …
Download full paperFile format: .doc, available for editing
HIDE THIS PAPERGRAB THE BEST PAPER94.2% of users find it useful 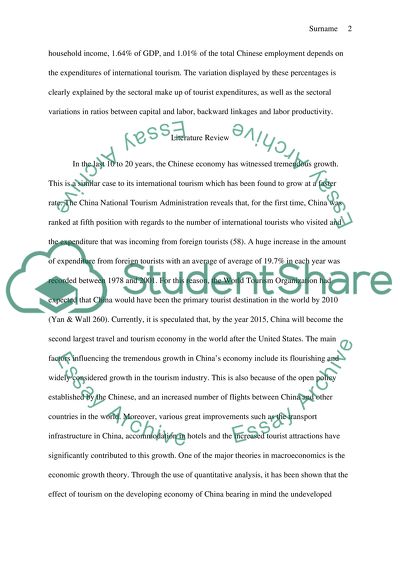 Extract of sample "Effects of tourism on economic growth in China"

Download file to see previous pages A huge increase in the amount of expenditure from foreign tourists with an average of average of 19.7% in each year was recorded between 1978 and 2001. For this reason, the World Tourism Organization had expected that China would have been the primary tourist destination in the world by 2010 (Yan & Wall 260). Currently, it is speculated that, by the year 2015, China will become the second largest travel and tourism economy in the world after the United States. The main factors influencing the tremendous growth in China’s economy include its flourishing and widely considered growth in the tourism industry. This is also because of the open policy established by the Chinese, and an increased number of flights between China and other countries in the world. Moreover, various great improvements such as the transport infrastructure in China, accommodation in hotels and the increased tourist attractions have significantly contributed to this growth. One of the major theories in macroeconomics is the economic growth theory. Through the use of quantitative analysis, it has been shown that the effect of tourism on the developing economy of China bearing in mind the undeveloped levels of their tourism industry, tourism plays a significant role in the development of the country’s economy. In the conclusion of their 1992 study, Yan and Wall (270) noted that both domestic and international tourism only had a slight impact on the national level. This is with regards to the diversity and size of the economy in China. Using the traditional Type I Input-output model, they did not include the impacts of domestic tourism. Contrary to the use of outdated data in this case, the World Travel and Tourism council has recently projected the indirect and direct effects of domestic and...
In this paper, the effect of tourism on the economic growth in China will be thoroughly evaluated, as the impact of tourism in China has not been sufficiently analyzed, prior to the time of the conducted analysis.
The size of tourism in China has significantly increased. A significant and sustainable growth has been experienced in China consequent to both domestic and international tourism for the past 20 years. With this, the ratio of tourism to the GDP in the country has been shown to increase every year.
Through the creation of the social accounting matrix, the type II input-output model was developed. This model contends that high percentage of total household income, GDP, and total Chinese employment depends on the expenditures of international tourism. The variation displayed by the percentages is clearly explained by the sectoral make up of tourist expenditures, as well as the sectoral variations in ratios between capital and labor, backward linkages and labor productivity.
The designation of an account as either endogenous or exogenous is the most fundamental step towards movement from SAM to a model structure. According to Bulmer-Thomas, the Social Accounting Matrix (SAM) plays an essential role in making accounting records for different economies
An investigation was performed on the dependence of Chinese economy on the expenditure by tourists. It was necessary to integrate the IO impact Model with the demand for endogenous consumption that is based on the SAM model. These instruments were used to estimate the “direct, indirect and induced dependence” that the Chinese economy has on the international tourism.
The impact of international tourism in China displays a lot of prospects for Chinese economy
...Download file to see next pagesRead More
Share:
Cite this document
(“Effects of tourism on economic growth in China Research Paper”, n.d.)
Retrieved from https://studentshare.org/macro-microeconomics/1404150-effects-of-tourism-on-economic-growth-in-china

“Effects of Tourism on Economic Growth in China Research Paper”, n.d. https://studentshare.org/macro-microeconomics/1404150-effects-of-tourism-on-economic-growth-in-china.
Comments (0)
Click to create a comment or rate a document

Despite the few negative incidences of crime committed by the United States of America’s security troops that were deployed in the country on a peacekeeping mission.
Since the war in Korea began in the early nineteen fifties, the United States has stationed tens of thousands of soldiers, mostly the United States’ army personnel, in South Korea. Through the assistance of the South Korean troops and other neighboring governments, the American troops have been able to guard and offer maximum security to South Korean people. In line with the argument of James (2003), ‘most of the military bases in South Korea are relatively isolated’ thus the need for much attention from the troops so as to ensure maximum...
10 Pages(2500 words)Assignment
sponsored ads
Save Your Time for More Important Things
Let us write or edit the research paper on your topic "Effects of tourism on economic growth in China" with a personal 20% discount.
GRAB THE BEST PAPER

Let us find you another Research Paper on topic Effects of tourism on economic growth in China for FREE!