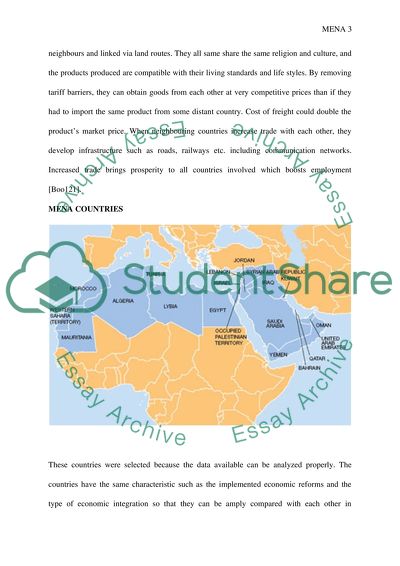 Download file to see previous pages The author explains the development of contemporary technologies in construction, telecommunication, heavy machinery, overland, sea and air transportation, and the development of the Internet (Ludema & Wootonb, 2000). The MENA region can be divided into various different segments. Two major resources of the region are the abundance of oil and the availability of human resources. MENA countries can be divided into three groups: a) Countries with enormous mineral resources and with large populations such as Algeria, Iraq, Syria, and Yemen. b) States/countries that have small indigenous populations and huge mineral resources and they need to import manpower, such as This group of countries comprises the Gulf Cooperation Council (GCC) members (Bahrain, Kuwait, Oman, Qatar, Saudi Arabia, and the United Arab Emirates) and Libya. c) Countries that have minimal resources and need to import oil and gas such as Egypt, Djibouti, Jordan, Lebanon, Mauritania, Morocco, Tunisia, and the Palestinian Authority. National integration was necessary for this region because the countries have the same status that is they have the lease natural resources and need to import gas and oil. The countries are neighbors and linked via land routes. They all the same share of the same religion and culture, and the products produced are compatible with their living standards and lifestyles. By removing tariff barriers, they can obtain goods from each other at very competitive prices than if they had to import the same product from some distant country. The cost of freight could double the product’s market price. When neighbouring countries increase trade with each other, they develop infrastructure such as roads, railways, etc. including communication networks. Increased trade brings prosperity to all countries involved which boosts employment (Booz & Company, 2012). MENA COUNTRIES These countries were selected because the data available can be analyzed properly. The countries have the same characters such as the implemented economic reforms and the type of economic integration so that they can be amply compared with each other in particular and the world in general. The economies of these countries are more service-oriented. The major countries participating in bilateral trade agreements are Egypt, Jordan, Tunisia, and Morocco. Jordan has bilateral free trade agreements with Tunisia, Syria, Lebanon, Egypt. The UAE, Bahrain and Kuwait, all signed since 1998. The country also has similar agreements with Libya, Algeria, and Yemen. Egypt has agreements with Syria, Morocco, Tunisia, Libya, Jordan and Iraq, and Tunisia has agreements Algeria, Egypt, and Libya. MENA states have increased their participation in the WTO, and during the last ten years, the area has witnessed an increase in bilateral between the Arab States in the region. The rise in trade agreements is because these countries are seriously interested in encouraging cooperation for the export of jointly produced goods. Another good reason is that countries all over the world are gaining enormous through intraregional trade agreements, and the countries comprising MENA also need to take advantage of such agreements. The Arab world has a history of failed agreements concluded in their region. Bilateralism is necessary as a response to the increasing numbers of European and American free trade agreements, and also as a means to maintain some semblance of equilibrium in trade with the western countries. ...Download file to see next pagesRead More
Share:
Tags
Cite this document
(Financial Market Integration and Macroeconomic Volatility Case Study, n.d.)
Financial Market Integration and Macroeconomic Volatility Case Study. Retrieved from https://studentshare.org/macro-microeconomics/1404098-regional-economic-integration-mena
(Financial Market Integration and Macroeconomic Volatility Case Study)
Financial Market Integration and Macroeconomic Volatility Case Study. https://studentshare.org/macro-microeconomics/1404098-regional-economic-integration-mena.
“Financial Market Integration and Macroeconomic Volatility Case Study”, n.d. https://studentshare.org/macro-microeconomics/1404098-regional-economic-integration-mena.
Comments (0)
Click to create a comment or rate a document

CHECK THESE SAMPLES OF Financial Market Integration and Macroeconomic Volatility

The number of factors or attributes desired from the vendor is vast, and different organizations and different industries place different importance on the attributes (Sonmat, 2006). Some of the vendor attributes may gain importance owing to the nature of the industry, for example, in the case of consumer perishables suppliers, like fresh vegetables or fruits, the buying firm would...
20 Pages(5000 words)Literature review
sponsored ads
Save Your Time for More Important Things
Let us write or edit the case study on your topic "Financial Market Integration and Macroeconomic Volatility" with a personal 20% discount.
GRAB THE BEST PAPER

Let us find you another Case Study on topic Financial Market Integration and Macroeconomic Volatility for FREE!