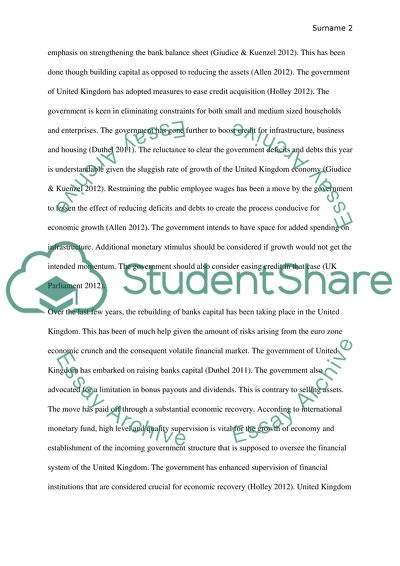 Download file to see previous pages United Kingdom has been working hard to recover from recession and support growth over the last few years. The policy mix has been of help in rebalancing the United Kingdom economy from recession toward external demand and investment. The government of United Kingdom has been implementing a strong fiscal consolidation with the aim of reducing budgetary risks. This paper focuses on the UK recession and the role played by the impact of the monetary policy in economic recovery. The United Kingdom has the chance to reduce the interest rates that have been set by the central bank now that the inflation seems to be well anchored (UK Parliament 2012). This is meant to create room for money to be injected into the economy. Consumer and business confidence in the United Kingdom remains weak even after the effort to rebalance the economy in the UK. The economic recovery has been supported by an emphasis on strengthening the bank balance sheet (Giudice & Kuenzel 2012). This has been done though building capital as opposed to reducing the assets (Allen 2012). The government of United Kingdom has adopted measures to ease credit acquisition (Holley 2012). The government is keen in eliminating constraints for both small and medium sized households and enterprises. The government has gone further to boost credit for infrastructure, business and housing (Duthel 2011). The reluctance to clear the government deficits and debts this year is understandable given the sluggish rate of growth of the United Kingdom economy (Giudice & Kuenzel 2012). Restraining the public employee wages has been a move by the government to lessen the effect of reducing deficits and debts to create the process conducive for economic growth (Allen 2012). The government intends to have space for added spending on infrastructure. Additional monetary stimulus should be considered if growth would not get the intended momentum. The government should also consider easing credit in that case (UK Parliament 2012). Over the last few years, the rebuilding of banks capital has been taking place in the United Kingdom. This has been of much help given the amount of risks arising from the euro zone economic crunch and the consequent volatile financial market. The government of United Kingdom has embarked on raising banks capital (Duthel 2011). The government also advocated for a limitation in bonus payouts and dividends. This is contrary to selling assets. The move has paid off through a substantial economic recovery. According to international monetary fund, high level and quality supervision is vital for the growth of economy and establishment of the incoming government structure that is supposed to oversee the financial system of the United Kingdom. The government has enhanced supervision of financial institutions that are considered crucial for economic recovery (Holley 2012). United Kingdom has embarked on a robust regulation and development policies for raising capital and financial oversight duties (IME 2012). The recent United Kingdom economic crisis has posed extreme difficulties to the economic policies. Growth is considered anemic after deep recession (Giudice & Kuenzel 2012). The government of the United Kingdom remains extremely concerned about fiscal sustainability. The government is faced by a fast increasing public debt and large deficits compared to the ratio of gross domestic products (GDP) ...Download file to see next pagesRead More
Share:
Tags
Cite this document
(“UK monetary policy Essay Example | Topics and Well Written Essays - 2500 words”, n.d.)
UK monetary policy Essay Example | Topics and Well Written Essays - 2500 words. Retrieved from https://studentshare.org/macro-microeconomics/1402594-monetary-policy
(UK Monetary Policy Essay Example | Topics and Well Written Essays - 2500 Words)
UK Monetary Policy Essay Example | Topics and Well Written Essays - 2500 Words. https://studentshare.org/macro-microeconomics/1402594-monetary-policy.
“UK Monetary Policy Essay Example | Topics and Well Written Essays - 2500 Words”, n.d. https://studentshare.org/macro-microeconomics/1402594-monetary-policy.
Comments (0)
Click to create a comment or rate a document

In the modern age of information technology, there are many threats created for organizational information. Organizations need a security model that has the capability to handle and secure our information reserves. Technical administrative safety /security measures like security plans, actions and procedures are the general practices for the organizational information security procedures. The attentiveness of producing actions is concerned by the organizations to an appreciably smaller level, on the other hand at the same time these are weighed up as being further efficient organizational actions than technical administrative ones. Information security encompasses organizational features, officially authorized aspects, institution...
6 Pages(1500 words)Research Paper
sponsored ads
Save Your Time for More Important Things
Let us write or edit the essay on your topic "UK monetary policy" with a personal 20% discount.
GRAB THE BEST PAPER

Let us find you another Essay on topic UK monetary policy for FREE!