Comments (0)
Add to wishlistDelete from wishlist
Cite this document
Summary
This essay examines the relation between Chinese economy and the manner in which its rising level of international trade has contributed to its growth. The Peoples Republic of China is currently the world’s second largest economy, when measured in terms of purchasing power parity and nominal GDP…
Download full paperFile format: .doc, available for editing
HIDE THIS PAPERGRAB THE BEST PAPER94% of users find it useful 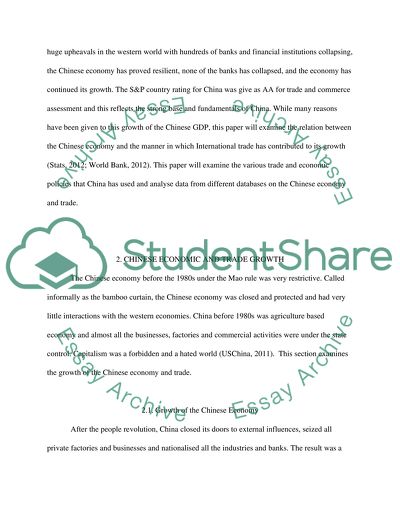 Extract of sample "International trade and economic growth of China"

Download file to see previous pages China before 1980s was agriculture based economy and almost all the businesses, factories and commercial activities were under the state control. Capitalism was a forbidden and a hated world (USChina, 2011). This section examines the growth of the Chinese economy and trade. 2.1. Growth of the Chinese Economy After the people revolution, China closed its doors to external influences, seized all private factories and businesses and nationalised all the industries and banks. The result was a total shut down of free enterprise. Capitalists and scholars were hunted down and all trade, industries were state owned. As a result, the nations stagnated and led to a sharp increase in poverty. While the rest of the world saw booms and busts, China had a stagnant and stable economy that was controlled by the state. The standard of living was slow and bicycles were the main mode of transport in the city. From 1979 onwards, the Chinese premier Deng Xiaoping started the measures of liberalisation, allowed trade with foreign nations, allowed FDI and created industrial zones along the eastern coast so that foreign firms could set up manufacturing activity (Zhang, 2007, p. 12). This far-reaching vision paid off and very soon, China started its upward trajectory of growth. The growth in the GDP and other economic indicators are given in Appendix “Table A1. China Economic Indicators – 1 of 3” to “3 of 3” that gives details of the economic indicators. Growth figures of the economy have been given for 19 indicators for the years 1980 until 2013. Projections for 2012 and 2013 are estimated figures. Following graph illustrates the growth rates in GDP, PPP and the CAB in USD billions from 1980 to 2013 (IMF, 2012)....
This paper presents a comprehensive review of various trade and economic policies that China has used to promote the growth of its economy, which is illustrated with the help of analysis of data from different databases on the Chinese economy and trade.
It is clear that China, which was lagging far behind the west has grown its GDP by more than 30 times from 1980 to 2011. This huge growth in GDP was brought out by growth in many sectors such as construction, industry, agriculture and trade.
China has used its trade policies in a very clever manner to trap the western nations at their own games. The western nations came to China initially to make use of the low labour costs. However, the lure of China proved to be very strong and hundreds of western nations moved to China.
China set up huge manufacturing centres where low cost labour was available and other benefits provided to western firms. Hundreds of firms from the west set up their factories in China and exported the goods to USA, Europe and many other nations.
China carries out trade with a large number of countries. However, the maximum trade in terms of value of goods is done with only a few nations. After the acceptance of WTO treaty, there was shift in the balance of trade in Chinas favour. In the previous decade, China was a net importer since it could not manufacture many of the products. However, with increase in the manufacturing sector, exports have grown.
With a positive trade balance, China offers a unique competitive advantage to western nations.
...Download file to see next pagesRead More
Share:
Tags
Cite this document
(“International trade and economic growth of China Essay”, n.d.)
International trade and economic growth of China Essay. Retrieved from https://studentshare.org/macro-microeconomics/1401941-international-trade-and-economic-growth-of-china

“International Trade and Economic Growth of China Essay”, n.d. https://studentshare.org/macro-microeconomics/1401941-international-trade-and-economic-growth-of-china.
Comments (0)
Click to create a comment or rate a document

CHECK THESE SAMPLES OF International trade and economic growth of China

As a matter of fact, Hoffman’s statement that “international affairs is the nemesis of liberalism” has a grain of truth in it and this is especially so after the 9/11 incident.
There are two schools of thought or perspectives that are used to view international affairs: liberalism and realism. The study of these two perspectives is significant to the idea posed by Stanley Hoffman because they determine the reasons why international affairs, according to him, does not only see eye-to-eye with liberalism but seems to stand on the opposing side of it.
Liberalism can be defined as having four elements: citizens; the legislature; property rights, and; a market-driven economy (Dunne 186). Realism, on the othe...
6 Pages(1500 words)Assignment
sponsored ads
Save Your Time for More Important Things
Let us write or edit the essay on your topic "International trade and economic growth of China" with a personal 20% discount.
GRAB THE BEST PAPER

Let us find you another Essay on topic International trade and economic growth of China for FREE!