Comments (0)
Add to wishlistDelete from wishlist
Cite this document
Summary
Economic efficiency is a state that is attained in an allocation of resources where it is not possible to improve the welfare or utility of an agent without reducing the welfare or utility of another agent. The competitive process ensures efficiency (i) in exchange, (ii) in the employment of inputs (iii) efficiency in the output market…
Download full paperFile format: .doc, available for editing
HIDE THIS PAPERGRAB THE BEST PAPER95.3% of users find it useful 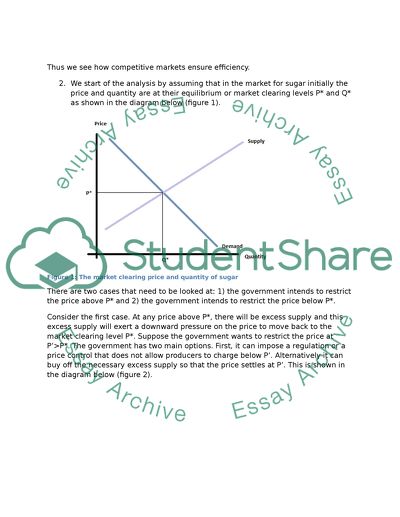 Download file to see previous pages Efficiency of exchange requires that all allocations lie on the contract curve such that the marginal rate of substitution between each pair of goods (x and y) is identical for all consumers. Recall that each consumer maximises utility by attaining the point of tangency between the indifference curve and the budget line for goods x and y.
Efficiency in production requires that each producer’s Marginal Rate of Technical Transformation between capital and labour is identical in the production of all goods and is achieved analogously to the efficiency of exchange. The requirement is that the Marginal rates of transformation between any two pairs of inputs be the same for all producers.
This is ensured through profit maximization which ascertains equality between the MRTS and input price ratio.
Efficiency in the Output market requires that the output mix be chosen such that the marginal rate of transformation between any two pair of goods is equal to every consumer’s marginal rate of substitution for the two goods. ...
assuming that in the market for sugar initially the price and quantity are at their equilibrium or market clearing levels P* and Q* as shown in the diagram below (figure 1). Figure 1: The market clearing price and quantity of sugar There are two cases that need to be looked at: 1) the government intends to restrict the price above P* and 2) the government intends to restrict the price below P*. Consider the first case. At any price above P*, there will be excess supply and this excess supply will exert a downward pressure on the price to move back to the market clearing level P*. Suppose the government wants to restrict the price at P’>P*. The government has two main options. First, it can impose a regulation or a price control that does not allow producers to charge below P’. Alternatively it can buy off the necessary excess supply so that the price settles at P’. This is shown in the diagram below (figure 2). Figure 2: The government buys off the excess supply at price P' so that it now becomes the market clearing price Essentially, the government creates additional demand to sweep up the excess supply and thereby mitigates the downward pressure on prices. Apart from this, the options available to the government are those of putting a quota on the sugar producers and/or providing them monetary incentives to produce within the quota. Now, consider case 2) where the government intends to restrict the price at a level below P*. There will be excess demand at this price and thus prices will tend to rise upward. The first option the government has is to legally forbid producers from charging more. Suppose the government wants to restrict the price at a maximum of P’’. It can either legally prohibit higher prices. Or as an alternative, if it has access to ...Download file to see next pagesRead More
Share:
Tags
Cite this document
(“Advanced Economic Analysis (Economic efficiency) Essay”, n.d.)
Retrieved de https://studentshare.org/macro-microeconomics/1390922-advanced-economic-analysis-economic-efficiency

Efficiency and Profitability of Exxon Mobil

In th...
8 Pages(2000 words)Case Study
sponsored ads
Save Your Time for More Important Things
Let us write or edit the essay on your topic "Advanced Economic Analysis (Economic efficiency)" with a personal 20% discount.
GRAB THE BEST PAPER

Let us find you another Essay on topic Advanced Economic Analysis (Economic efficiency) for FREE!