Comments (1)
Add to wishlistDelete from wishlist
Cite this document
Summary
The financial crisis of 2008-2010 that was caused by the failure in the housing market has real, wide and long term implications globally. No country has been spared of the negative consequences. Major banks became bankrupt…
Download full paperFile format: .doc, available for editing
HIDE THIS PAPERGRAB THE BEST PAPER91.4% of users find it useful 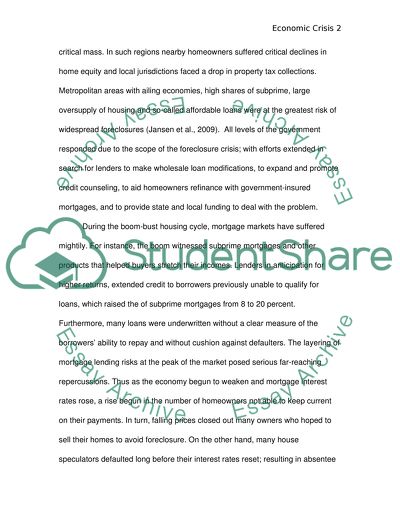 Download file to see previous pages According to the Mortgage Bankers Association estimates drawn from four-fifths of all loans suggested that the number of loans in foreclosure proceedings nearly doubled to almost one million by the end of 2007, while 400,000 were entering foreclosure. Although, the most rapid and dramatic increase was common in the riskier subprime loans, foreclosure rates on adjustable subprime mortgages were five times higher than those on adjustable prime loans.
In spite of the rate at which home owners were filing for foreclosures, not all foreclosures resulted in families losing their homes. For example estimates of loans owned and insured by Freddie Mac showed that less than half the homes with loans filed for foreclosure end up being sold. But with the hundreds of thousands of foreclosed homes flooding the already bloated markets, undue pressure was imposed on prices in places where foreclosures had reached a critical mass. In such regions nearby homeowners suffered critical declines in home equity and local jurisdictions faced a drop in property tax collections. Metropolitan areas with ailing economies, high shares of subprime, large oversupply of housing and so-called affordable loans were at the greatest risk of widespread foreclosures. (Jansen et al., 2009). All levels of the government responded due to the scope of the foreclosure crisis; with efforts extended in search for lenders to make wholesale loan modifications, to expand and promote credit counseling, to aid homeowners refinance with government-insured mortgages, and to provide state and local funding to deal with the problem. During the boom-bust housing cycle, mortgage markets have suffered mightily. For instance, the boom witnessed subprime mortgages and other products that helped buyers stretch their incomes. Lenders in anticipation for higher returns, extended credit to borrowers previously unable to qualify for loans, which raised the of subprime mortgages from 8 to 20 percent. Furthermore, many loans were underwritten without a clear measure of the borrowers’ ability to repay and without cushion against defaulters. The layering of mortgage lending risks at the peak of the market posed serious far-reaching repercussions. Thus as the economy begun to weaken and mortgage interest rates rose, a rise begun in the number of homeowners not able to keep current on their payments. In turn, falling prices closed out many owners who hoped to sell their homes to avoid foreclosure. On the other hand, many house speculators defaulted long before their interest rates reset; resulting in absentee owners accounting for 20 percent of loans entering foreclosure in early 2008. Consequently, swift deterioration in subprime loan performance caught many investors unaware. Due to the declining demand for securities backed by subprime mortgages, investors were forced to sell them at a loss. Furthermore, several mortgage companies and investment funds that had borrowed to purchase the securities with debt had to roll over. For lenders who were not able to provide more money as the debts came due, some companies were forced to default and lenders had to repossess many assets. Culminating from the size of mortgage debt outstanding and the fear that the crisis would spill over to the consumer credit prompted a freeze in credit markets and runs on investment banks and funds (Ely, 2009). From mid 2007 to the end of 2008, majority of Americans lost more than 25 percent of their net worth. ...Download file to see next pagesRead More
Share:
Cite this document
(“Economic impact of downturn in housing/mortgage industry in the US Research Paper”, n.d.)
Retrieved de https://studentshare.org/macro-microeconomics/1390554-economic-impact-of-downturn-in-housing-mortgage

sy
sydni70 added comment 1 year ago
Student rated this paper as
The topic of "Economic impact of downturn in housing/mortgage industry in the US 2008-2010" is quite popular among the tasks in university. Still, this document opens a fresh perspective of seeing the issue. I’ll use the idea for my own paper.

They are on trial and will be dealt with fairly. These laws ensure that no one, even if he or she has committed a crime is abused or punished cruelly.
Following the history of civilization like in china, we see the traces of systems for Criminal justice in order to provide safety for the citizens. Evolving through the years laws have been modified and changed to form the system that we know today.
From its start, the “U.S. criminal justice system” has advocated the idea of “checks and balances”. To avoid dictatorial rule, the people who founded this system in such a way that one person was not given control or authority completely to punish the criminals. The idea of assigning a ‘jury...
6 Pages(1500 words)Assignment
sponsored ads
Save Your Time for More Important Things
Let us write or edit the research paper on your topic "Economic impact of downturn in housing/mortgage industry in the US 2008-2010" with a personal 20% discount.
GRAB THE BEST PAPER

Let us find you another Research Paper on topic Economic impact of downturn in housing/mortgage industry in the US 2008-2010 for FREE!