Comments (0)
Add to wishlistDelete from wishlist
Cite this document
Summary
The paper "Analysis of Octavia E. Butler's Dawn" highlights that Butler’s story invokes a sort of fear and dread of visualizing human beings dominated by an alien species. It makes her audience reflect on the truth that someday could turn into a possibility…
Download free paperFile format: .doc, available for editing
HIDE THIS PAPERGRAB THE BEST PAPER95.4% of users find it useful 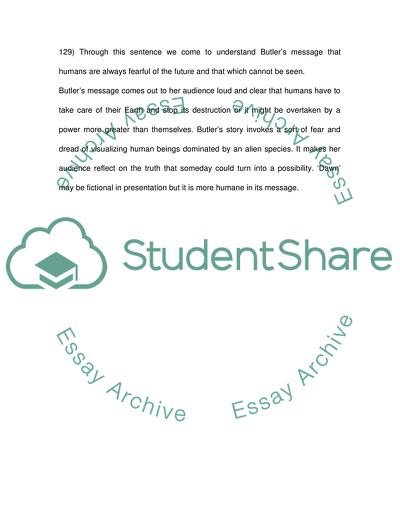 Bizarre and repelling “Dawn”, the first of the ‘Xenogenesis’ series had a human touch, which is as compelling as it is unthinkable.
“Dawn” is a sort of awakening after the “humanicide” (Butler, 1947 – 2006) destruction caused to the Earth through violent wars and mass homicides. As seen through the author’s eyes, the Oankali, a nomadic alien species are seen as genetic manipulators and traders who besides restoring humankind to their reconstructed Earth, were badly in need of trading their genes which were vital to the survival of their species. Lilith is chosen by the Oankali to be their mediator and is given the duty of convincing the humans that the actions of the Oankali are going to benefit all the humans. Fearing the inevitable on awaking the first human she states “You seemed least likely to try to kill me, least likely to fall apart, and most likely to be able to help with the others as they awaken” (Butler 129) Through this sentence we come to understand Butler’s message that humans are always fearful of the future and that which cannot be seen.

CHECK THESE SAMPLES OF Analysis of Octavia Butler's Dawn

Perhaps one of the most conspicuous aspects of CNN is that it has an excellent contact network and reporters on the spo...
8 Pages(2000 words)Case Study
sponsored ads
Save Your Time for More Important Things
Let us write or edit the book report/review on your topic "Analysis of Octavia Butler's Dawn" with a personal 20% discount.
GRAB THE BEST PAPER

Let us find you another Book Report/Review on topic Analysis of Octavia Butler's Dawn for FREE!