Comments (0)
Add to wishlistDelete from wishlist
Cite this document
Summary
The author of the paper examines Oedipus Rex, a play by Sophocles, which tells the tragic story of how Oedipus discovers that he has killed his father and married his mother. On discovering that he has committed these horrible crimes he blinds himself.  …
Download free paperFile format: .doc, available for editing
HIDE THIS PAPERGRAB THE BEST PAPER91.5% of users find it useful 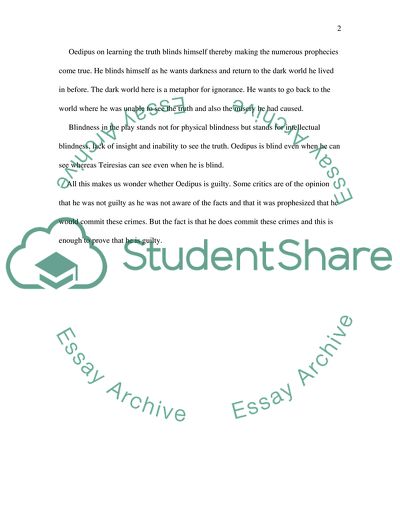 Extract of sample "Analysis of Oedipus Rex Play by Sophocles"

He was intelligent and was able to answer the Sphinx’s riddle. But he was unable to detect the truths of his life. He was blind to the facts of his origin. He refused to believe and see the truth and follow the advice of others who knew what was happening. He was blinded by arrogance. Her blindness is not about physical blindness. It stands for not being able to see beyond what appears before our eyes and being blind to our wrongs. Oedipus fails to see the wrongs he has done. Here Teiresias tells Oedipus "You cannot see the wretchedness of your own life,…You do not even know the blind wrongs that you have done to them [Laios and Iocaste], on earth and the world below". Even after Teiresias warnings, Oedipus refuses to see the truth. He turns a blind eye to the truth. On the other hand, Teiresias is blind, yet he is able to see farther than others and prophesizes that Oedipus would become blind. Teiresias demonstrates the power of insight.
Oedipus on learning the truth blinds himself thereby making the numerous prophecies come true. He blinds himself as he wants darkness and return to the dark world he lived in before. The dark world here is a metaphor for ignorance. He wants to go back to the world where he was unable to see the truth and also the misery he had caused.
Blindness in the play stands not for physical blindness but stands for intellectual blindness, lack of insight and inability to see the truth. Oedipus is blind even when he can see whereas Teiresias can see even when he is blind.
All this makes us wonder whether Oedipus is guilty. Some critics are of the opinion that he was not guilty as he was not aware of the facts and that it was prophesized that he would commit these crimes. But the fact is that he does commit these crimes and this is enough to prove that he is guilty.  Read More
Share:
Tags
Cite this document
(Analysis of Oedipus Rex Play by Sophocles Book Report/Review, n.d.)
Analysis of Oedipus Rex Play by Sophocles Book Report/Review. Retrieved from https://studentshare.org/literature/1557342-oedipus-rex-sophocles

CHECK THESE SAMPLES OF Analysis of Oedipus Rex Play by Sophocles

Perhaps one of the most conspicuous aspects of CNN is that it has an excellent contact network and reporters on the spo...
8 Pages(2000 words)Case Study
sponsored ads
Save Your Time for More Important Things
Let us write or edit the book report/review on your topic "Analysis of Oedipus Rex Play by Sophocles" with a personal 20% discount.
GRAB THE BEST PAPER

Let us find you another Book Report/Review on topic Analysis of Oedipus Rex Play by Sophocles for FREE!