Comments (0)
Add to wishlistDelete from wishlist
Cite this document
Summary
Dystopian fiction is an aspect of literature writing that creates a disregarded society and terrible society called dystopia. Many authors use this as a way of presenting the various directions that humanity may take due to the choices that they make hence creating one of two possible futures…
Download full paperFile format: .doc, available for editing
HIDE THIS PAPERGRAB THE BEST PAPER94.7% of users find it useful 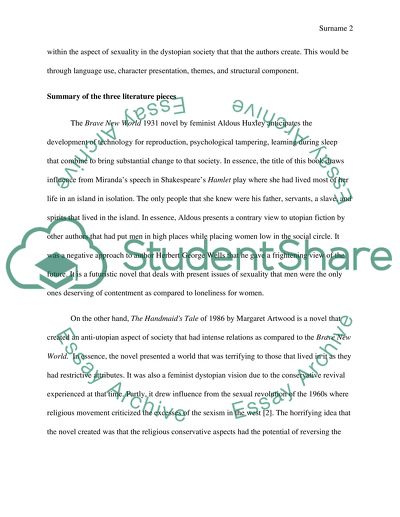 Extract of sample "Dystopian fictions and feminism. The Brave New World, The Handmaids Tale, and The Wastelands novel"

Download file to see previous pages This aspect tallies with utopian fiction as they both apply in science and speculative fiction novels. Ideally, dystopian fiction has an intense portrayal of abject mass poverty, suffering and relative oppression that a society may experience.
In essence, most authors use dystopian fiction as an analogy to the real issue experienced in the world [1]. They are mostly political warnings that present characters as lacking justice, fulfillment, and freedom. Tentatively, dystopian fiction may be a genre that most feminist writers any use as a way of asserting the conflict between individual desire and societal will on matters sexual. In this regard, this essay will delve on the resilience aspect of dystopian fiction that tends to topple political resistance within sexuality aspects. Additionally, the focus will be on the comparisons between the Brave New World, The Handmaid’s Tale, and The Wastelands novel within the aspect of sexuality in the dystopian society that that the authors create. This would be through language use, character presentation, themes, and structural component.
The Brave New World 1931 novel by feminist Aldous Huxley anticipates the development of technology for reproduction, psychological tampering, learning during sleep that combine to bring substantial change to that society. In essence, the title of this book draws influence from Miranda’s speech in Shakespeare’s Hamlet play where she had lived most of her life in an island in isolation. The only people that she knew were his father, servants, a slave, and spirits that lived in the island. In essence, Aldous presents a contrary view to utopian fiction by other authors that had put men in high places while placing women low in the social circle. It was a negative approach to author Herbert George Wells that he gave a frightening view of the future. It is a futuristic novel that deals with present issues of sexuality that men were the only ones deserving of contentment as compared to loneliness for women. On the other hand, The Handmaid's Tale of 1986 by Margaret Artwood is a novel that created an anti-utopian aspect of society that had intense relations as compared to the Brave New World. In essence, the novel presented a world that was terrifying to those that lived in it as they had restrictive attributes. It was also a feminist dystopian vision due to the conservative revival experienced at that time. Partly, it drew influence from the sexual revolution of the 1960s where religious movement criticized the excesses of the sexism in the west [2]. The horrifying idea that the novel created was that the religious conservative aspects had the potential of reversing the gains made in terms of feminism. The novel discussed the possible consequences that may befall society if there occurred a contravene of women’s rights. In essence, the society that Margaret talked about being one that had extremists that based its view on women from the traditional values that portrayed women as people whose fate was to be home caregivers. Lastly, The Wasteland poem by Eliot Thomas Stearns was one of the literature pieces that contributed immensely in the modernist movement[3]. Modernism in poetry was taking back the old forms of traditional instigations on romance that was slowly fading into oblivion. As a poet, Eliot wrote the poem when his marriage was failing and a when the couple was experiencing nervous breakdowns. It had elements of prophecy and satire that characterized the dystopian future element as it was obscure. Analysis of sexualism and political themes in the three literatures In the three pieces, the sexual theme is dominant ...Download file to see next pagesRead More
Share:
Tags
Cite this document
(“Dystopian fictions and feminism. The Brave New World, The Handmaids Coursework”, n.d.)
Retrieved from https://studentshare.org/literature/1404518-dystopian-fictions-and-feminism-the-brave-new-world-the-handmaids-tale-and-the-wastelands-novel

CHECK THESE SAMPLES OF Dystopian fictions and feminism. The Brave New World, The Handmaids Tale, and The Wastelands novel

On the other hand, these globalization standards are opposed by some critics and argue that globalization does not have to be a requirement for putting up a business in other countries, thus it is just a choice for entering a foreign market. Accordingly, standardization is applicable specifically to high-end markets and with accord to the market segmentation such as the trends that the young people patronize (Mullman, 2006) Regardless of the idea that globalization is mostly based on how the company standardizes the products, the home country still holds the profitability of the business as the economy affects how the foreign investors and other national sources back up the business (Stiglitz, 2006).
Making the world flat mak...
9 Pages(2250 words)Assignment
sponsored ads
Save Your Time for More Important Things
Let us write or edit the coursework on your topic "Dystopian fictions and feminism. The Brave New World, The Handmaids Tale, and The Wastelands novel" with a personal 20% discount.
GRAB THE BEST PAPER

Let us find you another Coursework on topic Dystopian fictions and feminism. The Brave New World, The Handmaids Tale, and The Wastelands novel for FREE!