Comments (0)
Add to wishlistDelete from wishlist
Cite this document
Summary
According to Schaffer, Agusti, and Earle (2008), there are four essential elements of a contract as per the common law requirements. First, mutual assent on the part of the contracting parties is necessary, and the contract has to be…
Download full paperFile format: .doc, available for editing
HIDE THIS PAPERGRAB THE BEST PAPER91.3% of users find it useful 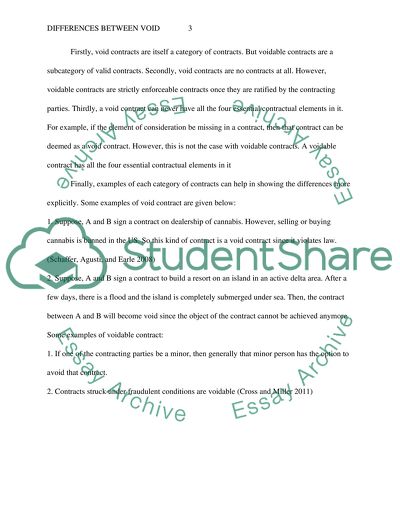 Extract of sample "Difference between void contracts and voidable contracts"

“Difference Between Void Contracts and Voidable Contracts Assignment”, n.d. https://studentshare.org/law/1655877-difference-between-void-contracts-and-voidable-contracts.
Comments (0)
Click to create a comment or rate a document

CHECK THESE SAMPLES OF Difference between void contracts and voidable contracts

...the clear difference between the two and how a better framework can be constituted to ensure that contracts not only manages the relationship of the parties in a construction project but also an enabler of how their relationship will be better rather than a hindrance. More often than not contracts are sometimes considered a hindrance to a better working relationship. This could be due to the disparity with regards to responsibility allocation and compensation allocation if not the assignment of risks and the disparity of the commercial exposure of the parties not aligned to the risks assigned to them. Equitable distribution of risks as well as the commercial exposure in...
12 Pages(3000 words)Coursework

...Essentials of a Valid Contract of Essentials of a Valid Contract The determination as to whether a contractual agreement exists between any two parties to an agreement, six salient requirements must be fulfilled. The establishment of a contractual relationship begins with the offeror manifesting his/her willingness to fulfill the desired promise under specified terms and conditions. Following the offer, the offeree must either in express or implied terms accept to enter into the agreement to fulfill he/her part of the bargain under the terms and conditions specified. Parties must be of sound mind and of legal age make legally binding decisions. Minors or persons with unsound mind lack the...
1 Pages(250 words)Essay

...Number Due Government Contracts In order to take part in government contracts it is important for the business to clearly understand the entire factors pertaining to the whole process. In this case, pre-negotiation is very important in order to acquaint the business with all the operations relating to government contracting. Indeed, it should be realized that the actual process in competing for government contracts will actually pose a lot of challenges for the first time. In this regard, pre-negotiations refer to the informal discussions that are conducted prior to the real formal negotiations. The topics in this process include the persons who will be involved, how the...
2 Pages(500 words)Essay

...Case Summary on Voidable Agreements and Unconscionable Contracts Introduction A voidable contract involves an agreement between two parties considered unenforceable by a court of law under certain circumstances. Those circumstances that render a contract unenforceable include non-disclosure of material facts, misrepresentation, provision of misleading information, fraud, lack of genuine good will by one party, coercion and those agreements involving minors. On the other hand, unconscionable contracts put one party at a disadvantaged position because the other party fails to disclose all material facts during an agreement...
2 Pages(500 words)Assignment

...that without an explicit promise, the contract was void. The appellant proved that Woods did not seek an equivalent request for her explicit promise. In addition, she did not make any requests for any proceeds from Wood in a manner that would have provided a sense of her “consideration”, which was vital for the validity of the contract. In light of this, the court established that even though, Wood failed to create a binding contract by not seeking the input of the other party, it was naturally implicit for the party to conduct himself in a reasonable manner by delivering half of the proceeds he was to obtain. The primary rationale behind the ruling was that for a...
2 Pages(500 words)Assignment

...Contracts A contract can be described as an agreement between two or more parties pertaining to the details of the various particulars that have been settled upon in this understanding. It holds legal viability and therefore can serve as a means of protection for individuals ensuring that they are not dealt with in an underhanded manner after an agreement has been made. It can also serve as evidence of the agreement that is in place(McKendrick Pg2). There are a number of different contracts that are available to an individual and they can be of use depending on the particular situation, some of the more common contracts that help most...
2 Pages(500 words)Essay

....”—This clause is obnoxious. It leaves room for maneuvers by the Publisher and works to the disadvantage of the author. The Publisher may protect his interest through insurance cover as for “destroyed” copies. 10. For television and movie rights and issues related to translation in other languages, the author should be a party in the negotiating team, and any agreement should be signed with the consent of the author. On such issues the author should have the power to veto any unfair offer. RANDOM HOUSE PUBLISHERS AUTHOR CONTRACT This Agreement is made as of March, 04, 2015 (the “Effective Date”) between (Your...
2 Pages(500 words)Assignment

...1) There is a valid contract between Adam and Bill since they agreed on two aspects; to open a joint venture and that Bill would sell Adam the restaurant in three years depending on its profitability. As a point of departure, it should be noted that a contract is a legally enforceable agreement between two or more people (Gibson, 1988). A contract can be verbal or in written form. Though Bill refused to sign the contract, the verbal agreement reached is binding. When a contract is created there is an offer and acceptance of that offer. Bill offers to sell Adam the restaurant and Adam accepted and this shows that a valid...
1 Pages(250 words)Assignment

...Express Warranty A warranty refers to guarantees, assurances, or promises that consumer good will do what it is intended to do (Margaret 123). The warranty usually has limits to what it covers (124). The United State has various Federal and State laws that govern warranties, in particular, furniture, and the remedies associated with the warranties (125). Section (2), clause (106) of Business and Trade Code defines a contract for sale as a contract to sell goods later in future or current sale of goods. In clause (401), the term sale means exchanging the ownership of goods for a price to the buyer from the seller. Clause (213) of section (2) states that express warranties are usually in the form of a...
1 Pages(250 words)Essay
sponsored ads
Save Your Time for More Important Things
Let us write or edit the assignment on your topic "Difference between void contracts and voidable contracts" with a personal 20% discount.
GRAB THE BEST PAPER

Let us find you another Assignment on topic Difference between void contracts and voidable contracts for FREE!