Comments (0)
Add to wishlist Delete from wishlist
Cite this document
Summary
Incoterms are a series of rules that regulate international commerce,and they are enacted by the International Chamber of Commerce.The main purposes of these rules,is to give information on the tasks,risks and costs associated with the delivery of the commodities…
Download full paper File format: .doc, available for editing
HIDE THIS PAPERGRAB THE BEST PAPER93.9% of users find it useful 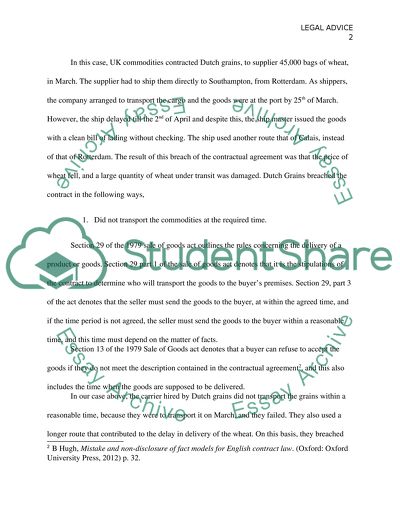 Download file to see previous pages One issue that arises under the incoterms is the CIF1. This term refers to the Cost Insurance Freight. In this case, the issue of CIF Southampton arises, and this involves the costs, and Insurance Freights of delivering the products to Southampton. In CIF, the seller insures the products during the course of transportation and delivery. FOB Southampton on the hand denotes that the buyer will have to bear all the risks, and costs associated with the transportation of the goods once the goods pass through the ships rail. In this case, UK commodities contracted Dutch grains, to supplier 45,000 bags of wheat, in March. The supplier had to ship them directly to Southampton, from Rotterdam. As shippers, the company arranged to transport the cargo and the goods were at the port by 25th of March. However, the ship delayed till the 2nd of April and despite this, the ship master issued the goods with a clean bill of lading without checking. The ship used another route that of Calais, instead of that of Rotterdam. The result of this breach of the contractual agreement was that the price of wheat fell, and a large quantity of wheat under transit was damaged. Dutch Grains breached the contract in the following ways, 1. Did not transport the commodities at the required time. Section 29 of the 1979 sale of goods act outlines the rules concerning the delivery of a product or goods. Section 29 part 1 of the sale of goods act denotes that it is the stipulations of the contract to determine who will transport the goods to the buyer’s premises. Section 29, part 3 of the act denotes that the seller must send the goods to the buyer, at within the agreed time, and if the time period is not agreed, the seller must send the goods to the buyer within a reasonable time, and this time must depend on the matter of facts. Section 13 of the 1979 Sale of Goods act denotes that a buyer can refuse to accept the goods if they do not meet the description contained in the contractual agreement2, and this also includes the time when the goods are supposed to be delivered. In our case above, the carrier hired by Dutch grains did not transport the grains within a reasonable time, because they were to transport it on March, and they failed. They also used a longer route that contributed to the delay in delivery of the wheat. On this basis, they breached the provisions contained in section 29 parts 3 of the 1979 sale of goods act. Section 29 part 5 of the act denotes that if this is breached, the contract can be rendered void3, and thus the buyer can refuse to accept the goods. 2. Did not supply the goods in the right quality. Another breach by the carriers is that they supplied the wheat products when they were already damaged. Section 35 part 2 of the 1979 sales act denotes that a buyer who has never examined the goods under consideration has not accepted the goods until he has examined them in order to ascertain if the goods are in accordance to the agreements stipulated in the contract. Subsection (b) of part 2 denotes that if the sale of the goods is by sample, the buyer must ascertain that quality of the goods under consideration, matches the quality of the sample. In our case above, a large proportion of the wheat were damaged4. On this basis, the buyer can reject the goods under consideration. This argument is reinforced by the provisions contained in Section 35A part 1(a) which denotes that the buyer has a right to reject goods brought to him by a seller, if he breaches the contractual agreement. Part (b) of the same section denotes that a buyer can reject some of the goods that have breached his contractual obligation with the seller. In our case abov ...Download file to see next pages Read More
Share:
Tags
Cite this document
(“Advise UK Commodities Assignment Example | Topics and Well Written Essays - 1500 words”, n.d.)
Advise UK Commodities Assignment Example | Topics and Well Written Essays - 1500 words. Retrieved from https://studentshare.org/law/1471022-advise-uk-commodities

The term clinical governance gained importance following the high mortality rate for pediatric cardiac surgery at the Bristol Royal Infirmary. The incident led to the formation by the government in 1998 of the Kennedy Commission, which proved a turning point in overhauling the NHS (Kennedy, 2001). The commission’s final report recommended that change “can only be brought about with the willing...
11 Pages (2750 words) Term Paper

...1. Assess the key macro factors that have influenced the UK grocery retailing industry since the early 1960s. The concept of organisational change is inherently intertwined with external threats and opportunities, which businesses must adapt to as part of strategic planning to continue long term growth. Senior and Fleming argue that the concept of organisational change has many faces, namely “convergent changes and transformational change that is organisation wide and characterised by radical shifts in strategy, mission values and associated changes of structures and systems” (In Thompson & Martin, 2005, p.41). Moreover, Johnson et al highlight that external macro-economic factors intrinsically impact strategy management and without...
13 Pages (3250 words) Assignment
sponsored ads
Save Your Time for More Important Things
Let us write or edit the assignment on your topic "Advise UK Commodities" with a personal 20% discount.
GRAB THE BEST PAPER

Let us find you another Assignment on topic Advise UK Commodities for FREE!