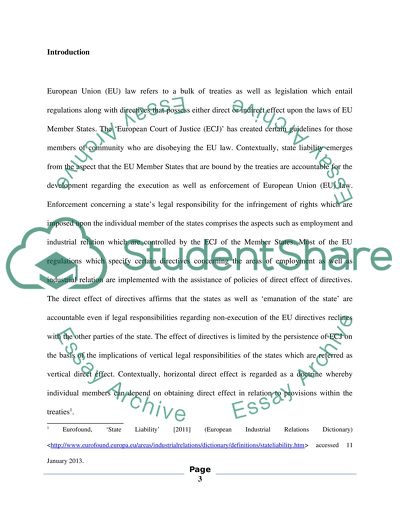 Download file to see previous pages Enforcement concerning a state’s legal responsibility for the infringement of rights which are imposed upon the individual member of the states comprises the aspects such as employment and industrial relation which are controlled by the ECJ of the Member States. Most of the EU regulations which specify certain directives concerning the areas of employment as well as industrial relation are implemented with the assistance of policies of direct effect of directives. The direct effect of directives affirms that the states as well as ‘emanation of the state’ are accountable even if legal responsibilities regarding non-execution of the EU directives reclines with the other parties of the state. The effect of directives is limited by the persistence of ECJ on the basis of the implications of vertical legal responsibilities of the states which are referred as vertical direct effect. Contextually, horizontal direct effect is regarded as a doctrine whereby individual members can depend on obtaining direct effect in relation to provisions within the treaties1. Explanation of Direct and Indirect Effect of EU Law and State Liability Direct effect is considered as a guideline of EU law where it emphasizes on those factors of EU law which are directly enforceable by union community members within their own Member States. Moreover, direct effect can be implemented by concerning upon directives, regulations, treaty provisions and its decisions. The notion of ‘direct effect’ was first utilized by the ECJ when it attributed to particular Treaty articles the legal value of direct effect in the case of NV Algemene Transporten Expeditie Onderneming van Gend en Loos v. Nederlandse Administratie der Belastingen case no.26/62 [1963]. In this case, ECJ recognized three circumstances which are essential to establish direct effect within the EU law. Three circumstances are as follows: The provision should maintain enough clarity and should be accurately stated This provision should be restricted and not related with any other legal stipulation It should bestow an appropriate right by which a citizen can make a claim If these aforementioned conditions are fulfil then the stipulation of the treaties can provide similar legal effects as regulations mentioned in the Article 288 ‘Treaty on the Functioning of the European Union (TEFU)’2. The policy of indirect effect needs the decision of national court where parties of the Member States are responsible for the fulfilment of EU obligations. Contextually, this policy enforces indirectly by the mechanism of judicial interpretation of domestic law. Moreover, indirect effect can be viewed as an addition regulation of EU law as well as a consequence of the policy of direct effect. On the basis of the implication of the specification of directives which creates direct effect wherein national court should ignore the domestic laws in order to minimize the conflict between the directives as well as domestic law3. The indirect effect has been observed to take place in the case of Plaumann & Co v Commission, Case 25/62, 15 July 19634. The ECJ ...Download file to see next pages Read More
Share:
Tags
Cite this document
(“EU Law Coursework Example | Topics and Well Written Essays - 2000 words”, n.d.)
EU Law Coursework Example | Topics and Well Written Essays - 2000 words. Retrieved from https://studentshare.org/law/1466119-eu-law

CHECK THESE SAMPLES OF EU Law

New and complex issues have arisen which demanded fresh understanding and handling of cases involved them. This has resulted in the enhanced development of specialized laws e.g. cyber laws and interpretation of those laws. The same is true with Media Laws. Media has developed much in the last half-century. As it evolved as a profession and more people started to join it, there arose the levels of money involved in it. With this grew the contractual obligations on the parts of parties and concerned laws e.g. patent laws, privacy laws, and copyrights laws, etc. also started to play their parts. With these issues, the role of law in the media industry also reached a new height.
Mathew Fisher, the appellant, joined a band with Mr...
6 Pages (1500 words) Assignment
sponsored ads
Save Your Time for More Important Things
Let us write or edit the coursework on your topic "EU Law" with a personal 20% discount.
GRAB THE BEST PAPER

Let us find you another Coursework on topic EU Law for FREE!