Comments (0)
Add to wishlistDelete from wishlist
Cite this document
Summary
The conduct and manner in which police should present them in the due course of his/her duty should not at any time be influenced by the underling traits of the suspects. They are required to use force only when a situation demands for it, and this should in line with the law…
Download full paperFile format: .doc, available for editing
HIDE THIS PAPERGRAB THE BEST PAPER94.3% of users find it useful 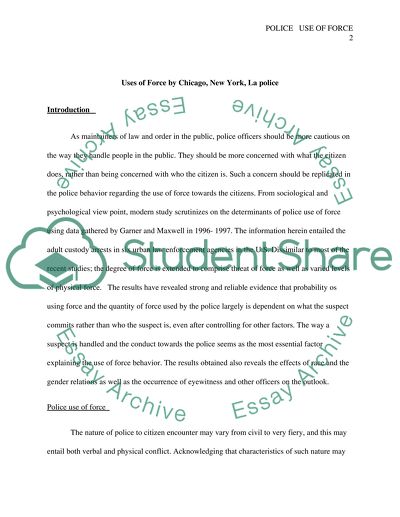 As maintainers of law and order in the public, police officers should be more cautious on the way they handle people in the public.
From sociological and psychological view point, modern study scrutinizes on the determinants of police use of force using data gathered by Garner and Maxwell in 1996- 1997.The information herein entailed the adult custody arrests in six urban law enforcement agencies in the U.S. Dissimilar to most of the recent studies; the degree of force is extended to comprise threat of force as well as varied levels of physical force. The results have revealed strong and reliable evidence that probability os using force and the quantity of force used by the police largely is dependent on what the suspect commits rather than who the suspect is, even after controlling for other factors. The way a suspect is handled and the conduct towards the police seems as the most essential factor explaining the use of force behavior. The results obtained also reveals the effects of race and the gender relations as well as the occurrence of eyewitness and other officers on the outlook. Police use of force The nature of police to citizen encounter may vary from civil to very fiery, and this may entail both verbal and physical conflict. Acknowledging that characteristics of such nature may encounter alongside with the behaviors of the officers and suspects is essential to comprehend the factors impacting police use of force. All over the world, policing entails and at times demands some amount of force. Bittner (1975) accentuates on this aspect of police work and, moreover, affirms that police are nothing else but a mechanism for the dissemination of situational acceptable force in the society. The law and enforcement officers, are required to use force in particular circumstances, are trained in the use of force, and, in general, encounter numerous situations on their due course of duty when the use of force is required. For instance, in arresting wrongdoers, averting escape, putting into custody the disorderly participants, or when safeguarding themselves and the blameless victims from getting injured. As it has been confirmed by Skolnick and Fyfe (1993, p. 37), “as long as the public continues defying law and order, and resist arrest, use of force by the police remains inevitable. Even though the use of force by the police has been significant inn averting and regulating law and order in the society, it has however contributed to alarming rate of social and legal consequences amid the police and the public. This is an aspect that has predominantly resulted towards studying on this essential topic and would enrich our knowledge towards an efficient comprehension in this area of study. Recent research carried out on police use of force reveals that police use force rarely (Adams, 1999; Friedrich, 1980; Garner, Buchanan, Schade, & Hepburn, 1996; Garner & Maxwell, 1999; Worden, 1996). Whether indicated by authorized use of force, (Alpert & Dunham, 1999), the complaints of the citizens, those surveying the officers, the arrestees, citizens or the observational methods the recorded data constantly reveal that only a minor portion of police – public relations makes use of force. On the other hand, the encounter amid of the police and the citizen, in which police officers frequently are compelled to make swift decisions may generate inappropriate or unnecessary use of force that may ruin and lower the repute of police authority and authenticity in the public. Among the different theoretical orientations used to explain police use of force, Terrill and Mastrofski (2002) identifies a particular sociological and psychological perspective that ...Download file to see next pagesRead More
Share:
Tags
Cite this document
(“Uses of Force by Chicago, New York, La police Research Paper”, n.d.)
Retrieved from https://studentshare.org/law/1433869-uses-of-force-by-chicago-new-york-la-police

CHECK THESE SAMPLES OF Uses of Force by Chicago, New York, La police

.... But in spite of these two negative reports, the state police forces are doing a commendable job within the limitations that they have to work with. Apart from these security agencies, most states also have a department called State Bureau of Investigation primarily using plain clothes detectives to combat crime. The local police departments: Such agencies are formed with respect to cities and towns and come under the jurisdiction of the local governing bodies or councils. For example, the New York City Police Department is headed by a city police commissioner. The commissioner, who is a civilian, is appointed by the mayor of the city. The duties of its staff are similar to state police officers, the difference being the area covered...
8 Pages(2000 words)Case Study

It has as a central idea that whatever else Man does will ultimately end up as nothing. This is the cen...
8 Pages(2000 words)Term Paper
sponsored ads
Save Your Time for More Important Things
Let us write or edit the research paper on your topic "Uses of Force by Chicago, New York, La police" with a personal 20% discount.
GRAB THE BEST PAPER

Let us find you another Research Paper on topic Uses of Force by Chicago, New York, La police for FREE!