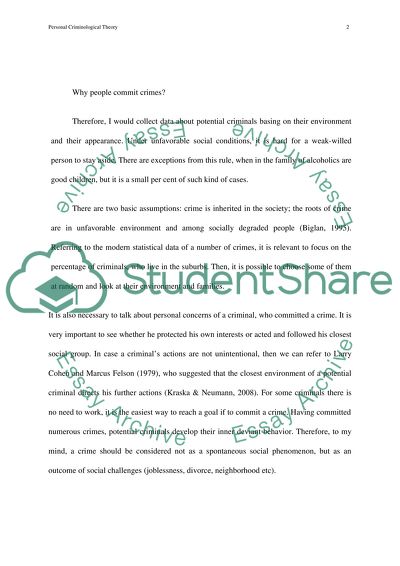 Download file to see previous pages To my mind, these factors are of crucial importance. Even if a person does not have in-born factors influencing on his deviant behavior in the future, people around him may reshape his way of life. At this point I would focus my attention on districts, where poor people leave. Another determinant factor, suggested by the Chicago School is appearance of a potential criminal (Garland & Sparks, 2000). Physiology of criminals may be differentiated from physiology of non-criminals. It is claimed further on that the abovementioned factors are relevant both to differentiate criminals from poor people and from a more privileged class. In the modern context it is relevant to analyze behavior of potential criminals among white-collar workers. Still, a growing number of crimes among criminals from poor families cannot be denied. Why people commit crimes? Therefore, I would collect data about potential criminals basing on their environment and their appearance. Under unfavorable social conditions, it is hard for a weak-willed person to stay aside. There are exceptions from this rule, when in the family of alcoholics are good children, but it is a small per cent of such kind of cases. There are two basic assumptions: crime is inherited in the society; the roots of crime are in unfavorable environment and among socially degraded people (Biglan, 1995). Referring to the modern statistical data of a number of crimes, it is relevant to focus on the percentage of criminals, who live in the suburbs. Then, it is possible to choose some of them at random and look at their environment and families. It is also necessary to talk about personal concerns of a criminal, who committed a crime. It is very important to see whether he protected his own interests or acted and followed his closest social group. In case a criminal’s actions are not unintentional, then we can refer to Larry Cohen and Marcus Felson (1979), who suggested that the closest environment of a potential criminal directs his further actions (Kraska & Neumann, 2008). For some criminals there is no need to work, it is the easiest way to reach a goal if to commit a crime. Having committed numerous crimes, potential criminals develop their inner deviant behavior. Therefore, to my mind, a crime should be considered not as a spontaneous social phenomenon, but as an outcome of social challenges (joblessness, divorce, neighborhood etc). Still, if I had to develop my personal criminological theory in the modern context, I would refer to Routine activity theory. There is a growth of crimes among businessmen, white-collar workers and other “not-degraded” individuals. It never occurred in earlier years that upper layers of the society had committed so many crimes, as they do now. It is a new form of deviant behavior. Still, I would focus on environmental, biological and psychological concerns in this case as well. A potential criminal form a privileged family, supposedly, found the roots of his further criminal behavior among his family members or his closest environment (Williams and McShane, 2009). So, I would like to focus on some cases of white-collar crimes and consider environment of a criminal in details. Conclusion The modern globalized world with an overall hazard of potential terroristic attacks makes people more hostile and they neglect morals and laws. Consequently, in spite of different social theories directed on deviant behavior exploration, there are no effective ...Download file to see next pages Read More
Share:
Tags
Cite this document
(“Personal Criminological Theory Term Paper Example | Topics and Well Written Essays - 750 words”, n.d.)
Personal Criminological Theory Term Paper Example | Topics and Well Written Essays - 750 words. Retrieved from https://studentshare.org/law/1431702-personal-criminological-theory

...Management Theory and Practice in the early childhood education industry This Report applies management theory into practice in the early childhood industry, especially in the context of women leaders. Management issues play a significant role in the academic sector, because early childhood professionals need higher levels of motivation in order to avoid burnout . As pointed out in a study by Osgood and Halsall (2007) where they carried out research to examine the position of women in leadership or management positions, a “glass ceiling” exists for women in the academic setting, which could significantly impair motivation. Since many of the individuals employed in the early education sector are women, addressing this issue is even more...
6 Pages (1500 words) Coursework
sponsored ads
Save Your Time for More Important Things
Let us write or edit the term paper on your topic "Personal Criminological Theory" with a personal 20% discount.
GRAB THE BEST PAPER

Let us find you another Term Paper on topic Personal Criminological Theory for FREE!