Comments (0)
Add to wishlistDelete from wishlist
Cite this document
Summary
Assault: Theory and Florida State Statute Name of the Student Subject Name of the Concerned Professor June 16, 2011 Abstract Assault is a crime that comes within the ambit of Criminal Law. Simply speaking, it is a crime of violence perpetrated by one person on other…
Download full paperFile format: .doc, available for editing
HIDE THIS PAPERGRAB THE BEST PAPER93.9% of users find it useful 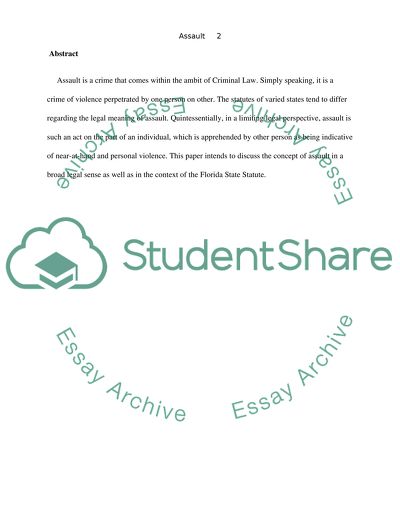 Download file to see previous pages This paper intends to discuss the concept of assault in a broad legal sense as well as in the context of the Florida State Statute. Assault: Theory and Florida State Statute The crime of assault is subject to varied gradations. While on the one side there is the concept of simple assault, which could be interpreted more in the nature of a violent misdemeanor, on the other side one has the notion of aggravated assault that actually results in a serious physical harm to the targeted person (Fletcher, 1998, p. 72). A simple assault is marked by two factors that is an unlawful threat by a perpetrator to injure a victim as well as the commensurate ability of the perpetrator to commit an act of violence (Hall, 1960, p. 257). In other words, in the case of a simple assault, the defendant not only acts towards a victim in a threatening manner, but also takes the steps aimed at inflicting physical harm on the victim. In such a scenario, though the victim may not actually get physically injured by the defendant, yet the threatening conduct of the defendant is sufficient enough to make the victim apprehensive of an imminent physical harm or injury. Varied factors need to be taken into consideration to establish as to whether an act of a defendant amounted to simple assault (Harcourt, 1999). In that context, a personal harm that is limited to the use of abusive or threatening language, simply does not establish an act of assault. People simply could not be held culpable under criminal law for harboring intimidating thoughts or expressing them. Also, personal harms that are limited to verbal exchanges or seemingly or actually threatening language are mostly difficult to establish as they are of times open to varied and diverse interpretations. An authentic charge of assault must invariably needs to be backed by some substantive conduct or acts on the part of a defendant that validate and corroborate to the defendants violent intents and purpose (Fletcher, 1998). These acts may include threatening gestures, accompanied or unaccompanied by verbal threats, possession of a weapon by a defendant and the physical proximity of the defendant to the victim (Hall, 1960). Perhaps, it gets easier to understand the act of assault by creating an illustrative scenario. Suppose, one night a man named Joe was walking through an unlighted street in the town. Due to it being dark, Joe accidently bumps into a guy named Max coming from the opposite side. Though Joe apologized to Max, Max simply got enervated and the situation got out of control. Max moved a few steps back and started threatening Joe, using abusive language, blaming him for daring to mess with him. Max threatened to Joe that he will teach him a good lesson and will make him pay for his misconduct. Max proceeded to pick up a rusty steel pipe lying on the wayside and kept threatening to harm and injure Joe. Just as when Max picked up the rod, he heard the sound of a police patrol car siren and he threw away the rod and moved on. In such a scenario, Max’s act could possibly be categorized as simple assault. Max’s threatening language and accompanying body language does prove that he had the ability and intent to cause harm to Joe. His act of picking up a rusty steel pipe and threatening to make Joe pay were sufficient to make Joe fear a near-at-hand and violent physical contact. Not only Joe apprehended that a physical harm to him was about to take place, but these apprehensions seemed reasonable and possible in the light of ...Download file to see next pagesRead More
Share:
Tags
Cite this document
(“Assault: Theory and Florida State Statute Term Paper”, n.d.)
Retrieved from https://studentshare.org/law/1425577-define-and-discuss-the-crime-of-assault-explain
(Assault: Theory and Florida State Statute Term Paper)
https://studentshare.org/law/1425577-define-and-discuss-the-crime-of-assault-explain.
“Assault: Theory and Florida State Statute Term Paper”, n.d. https://studentshare.org/law/1425577-define-and-discuss-the-crime-of-assault-explain.
Comments (0)
Click to create a comment or rate a document

CHECK THESE SAMPLES OF Assault: Theory and Florida State Statute

...Management Theory and Practice in the early childhood education industry This Report applies management theory into practice in the early childhood industry, especially in the context of women leaders. Management issues play a significant role in the academic sector, because early childhood professionals need higher levels of motivation in order to avoid burnout . As pointed out in a study by Osgood and Halsall (2007) where they carried out research to examine the position of women in leadership or management positions, a “glass ceiling” exists for women in the academic setting, which could significantly impair motivation. Since many of the individuals employed in the early education sector are women, addressing this issue is even more...
6 Pages(1500 words)Coursework
sponsored ads
Save Your Time for More Important Things
Let us write or edit the term paper on your topic "Assault: Theory and Florida State Statute" with a personal 20% discount.
GRAB THE BEST PAPER

Let us find you another Term Paper on topic Assault: Theory and Florida State Statute for FREE!