Comments (0)
Add to wishlistDelete from wishlist
Cite this document
Summary
The paper “Internet and International Commercial Law” will examine the application of information technology in the conduct of business, which has given rise to several legal issues such as formation of contracts and legal uncertainties…
Download full paperFile format: .doc, available for editing
HIDE THIS PAPERGRAB THE BEST PAPER92.4% of users find it useful 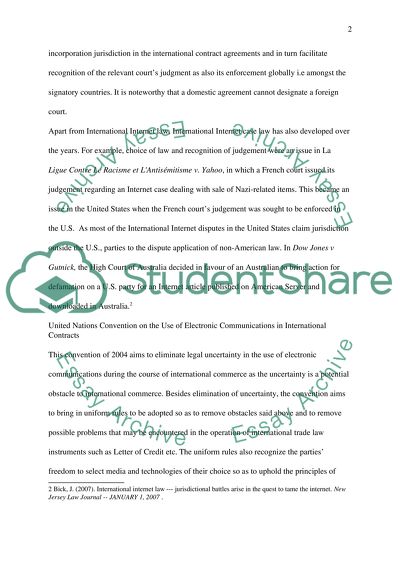 Download file to see previous pages The Internet has become the platform for sellers to show case their goods and services which the buyers and consumers alike could access them readily at competitive prices. Internet legal hassles increase with the ever increasing usage of internet internationally. Although disputes are resolved through long existing treaties, conventions and jurisdictions, some issues relating international applications and internet regulations are yet to be addressed. The United States law is the frequently applied law to set right legal issues arising out of international internet legal difficulties concerning e-commerce of not only Americans but also people outside the American jurisdiction, Just as the United States have legislated Internet-related laws, there are Cyber-Crime Conventions, the Hague Conventions on Jurisdictions and judgments, rulings of the World Intellectual Property Organisation and the United Nations Internet Governance available for applications in the international commerce transactions. The Hague Choice of Court Convention aims to remove uncertainty in the issues of jurisdiction, judgement recognition in online transactions governed by International business-to-business to agreements. Obviously consumer transactions are not included. The Hague Convention’s provision for honouring of forum selection clauses will ensure incorporation jurisdiction in the international contract agreements and in turn facilitate recognition of the relevant court’s judgment as also its enforcement globally i.e amongst the signatory countries. It is noteworthy that a domestic agreement cannot designate a foreign court. Apart from International Internet law, International Internet case law has also developed over the years. For example, choice of law and recognition of judgement were an issue in La Ligue Contre Le Racisme et L'Antisemitisme v. Yahoo, in which a French court issued its judgement regarding an Internet case dealing with sale of Nazi-related items. This became an issue in the United States when the French court’s judgement was sought to be enforced in the U.S. As most of the International Internet disputes in the United States claim jurisdiction outside the U.S., parties to the dispute application of non-American law. In Dow Jones v Gutnick, the High Court of Australia decided in favour of an Australian to bring action for defamation on a U.S. party for an Internet article published on American Server and downloaded in Australia.2 United Nations Convention on the Use of Electronic Communications in International Contracts This convention of 2004 aims to eliminate legal uncertainty in the use of electronic communications during the course of international commerce as the uncertainty is a potential obstacle to international commerce. Besides elimination of uncertainty, the convention aims to bring in uniform rules to be adopted so as to remove obstacles said above and to remove possible problems that may be encountered in the operation of international trade law instruments such as Letter of Credit etc. The uniform rules also recognize the parties’ freedom to select media and technologies of their choice so as to uphold the principles of technological neutrality and functional equivalence. This would ensure that electronic means chosen by the parties are in compliance with law. Thus this Convention applies where parties to a contract are from different countries. ...Download file to see next pagesRead More
Share:
Tags
Cite this document
(“Internet and International Commercial Law Dissertation”, n.d.)
Retrieved from https://studentshare.org/law/1412426-role-of-international-commercial-arbitration-in
(Internet and International Commercial Law Dissertation)
https://studentshare.org/law/1412426-role-of-international-commercial-arbitration-in.
“Internet and International Commercial Law Dissertation”, n.d. https://studentshare.org/law/1412426-role-of-international-commercial-arbitration-in.
Comments (0)
Click to create a comment or rate a document

CHECK THESE SAMPLES OF Internet and International Commercial Law

As a matter of fact, Hoffman’s statement that “international affairs is the nemesis of liberalism” has a grain of truth in it and this is especially so after the 9/11 incident.
There are two schools of thought or perspectives that are used to view international affairs: liberalism and realism. The study of these two perspectives is significant to the idea posed by Stanley Hoffman because they determine the reasons why international affairs, according to him, does not only see eye-to-eye with liberalism but seems to stand on the opposing side of it.
Liberalism can be defined as having four elements: citizens; the legislature; property rights, and; a market-driven economy (Dunne 186). Realism, on the othe...
6 Pages(1500 words)Assignment
sponsored ads
Save Your Time for More Important Things
Let us write or edit the dissertation on your topic "Internet and International Commercial Law" with a personal 20% discount.
GRAB THE BEST PAPER

Let us find you another Dissertation on topic Internet and International Commercial Law for FREE!