Comments (0)
Add to wishlistDelete from wishlist
Cite this document
Summary
European Law Task 1 Introduction Citizens of the European Union (EU) are strictly those who are nationals of the Member States of the EU. This status can be achieved by a national of a third country, only by procuring the nationality of a Member State. A clear Community immigration policy has been introduced, which brings this issue to the forefront…
Download full paperFile format: .doc, available for editing
HIDE THIS PAPERGRAB THE BEST PAPER94.9% of users find it useful 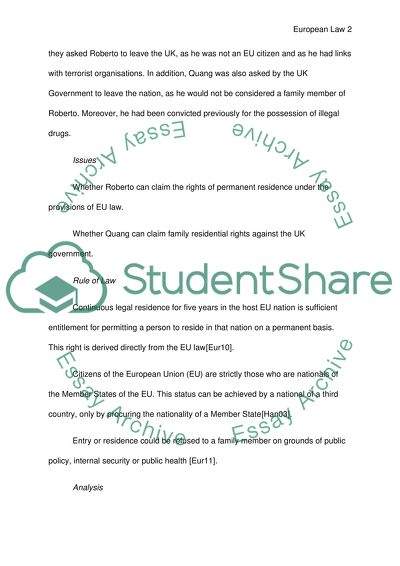 CHECK THESE SAMPLES OF European law

In th...
8 Pages(2000 words)Case Study
sponsored ads
Save Your Time for More Important Things
Let us write or edit the assignment on your topic "European law" with a personal 20% discount.
GRAB THE BEST PAPER

Let us find you another Assignment on topic European law for FREE!