Comments (0)
Add to wishlistDelete from wishlist
Cite this document
Summary
Business Law Name: Instructor: Course: Date: Q1. Assume that the elements of intention and consideration required for the formation of a contract exists. Using the four-step process, discuss whether the element of agreement required for the formation of a contract can be established…
Download full paperFile format: .doc, available for editing
HIDE THIS PAPERGRAB THE BEST PAPER95.9% of users find it useful 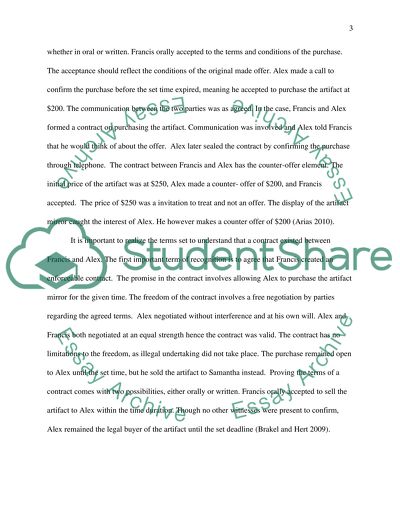 Download file to see previous pages The case involves three parties, Alex, Francis and Samantha. When handling a contract, the terms of a contract are important in setting out regulations required to make a communication. The ‘term’ refers to the promise made in the conditions of the contract to be legal binding. The terms of a contract indicate the contents of the agreement. The agreement between Francis and Alex was to sell the Artifact mirror for $200 for the given duration. Alex reached home and informed Francis on his willingness to purchase the artifact for the agreed price. The message however reached Francis after he offered the artifact to Samantha for $230. Alex had a legal enforceable contract with Francis as he orally communicated with him concerning his willingness to take up the offer. The breach of a contract occurs when one party fails to perform in accordance to the agreed terms and conditions (Answers 2011). Forming a contract requires an offer. An offer refers to the willingness to abide by conditions provided by the contract. Francis offered a product for sale and Alex was willing to take up the offer, given the terms that Francis provided. Both Francis and Alex are bound to the contract given the time agreement does not expire. The other element of the contract evident in the case is acceptance. Acceptance refers to the unconditional agreement to the provided terms whether in oral or written. Francis orally accepted to the terms and conditions of the purchase. The acceptance should reflect the conditions of the original made offer. Alex made a call to confirm the purchase before the set time expired, meaning he accepted to purchase the artifact at $200. The communication between the two parties was as agreed. In the case, Francis and Alex formed a contract on purchasing the artifact. Communication was involved and Alex told Francis that he would think of about the offer. Alex later sealed the contract by confirming the purchase through telephone. The contract between Francis and Alex has the counter-offer element. The initial price of the artifact was at $250, Alex made a counter- offer of $200, and Francis accepted. The price of $250 was a invitation to treat and not an offer. The display of the artifact mirror caught the interest of Alex. He however makes a counter offer of $200 (Arias 2010). It is important to realize the terms set to understand that a contract existed between Francis and Alex. The first important term of recognition is to agree that Francis created an enforceable contract. The promise in the contract involves allowing Alex to purchase the artifact mirror for the given time. The freedom of the contract involves a free negotiation by parties regarding the agreed terms. Alex negotiated without interference and at his own will. Alex and Francis both negotiated at an equal strength hence the contract was valid. The contract has no limitations to the freedom, as illegal undertaking did not take place. The purchase remained open to Alex until the set time, but he sold the artifact to Samantha instead. Proving the terms of a contract comes with two possibilities, either orally or written. Francis orally accepted to sell the artifact to Alex within the time duration. Though no other witnesses were present to confirm, Alex remained the legal buyer of the artifact until the set deadline (Brakel and Hert 2009). Like in the case of Rankin vs. Scott Fell and co (1904) 2 CLR 164, the ruling indicates presence of a contract even if no ...Download file to see next pagesRead More
Share:
Tags
Cite this document
(“Business Law Research Paper Example | Topics and Well Written Essays - 2500 words”, n.d.)
Business Law Research Paper Example | Topics and Well Written Essays - 2500 words. Retrieved from https://studentshare.org/law/1403621-business-law
(Business Law Research Paper Example | Topics and Well Written Essays - 2500 Words)
Business Law Research Paper Example | Topics and Well Written Essays - 2500 Words. https://studentshare.org/law/1403621-business-law.
“Business Law Research Paper Example | Topics and Well Written Essays - 2500 Words”, n.d. https://studentshare.org/law/1403621-business-law.
Comments (0)
Click to create a comment or rate a document

CHECK THESE SAMPLES OF Business Law

The Census Bur...
6 Pages(1500 words)Assignment
sponsored ads
Save Your Time for More Important Things
Let us write or edit the research paper on your topic "Business Law" with a personal 20% discount.
GRAB THE BEST PAPER

Let us find you another Research Paper on topic Business Law for FREE!