Comments (0)
Add to wishlist Delete from wishlist
Cite this document
Summary
Introduction The modern copyright laws originated in the United Kingdom. Currently, the UK copyright law is found in the 1988 Act, which has since been amended several times especially for the purpose of inclusion of European Union directives. Under this Act, the types of work protected under copyright include artistic/musical work, dramatic, sound recording, literary work, broadcast, and typographical arrangement of a published work…
Download full paper File format: .doc, available for editing
HIDE THIS PAPERGRAB THE BEST PAPER92% of users find it useful 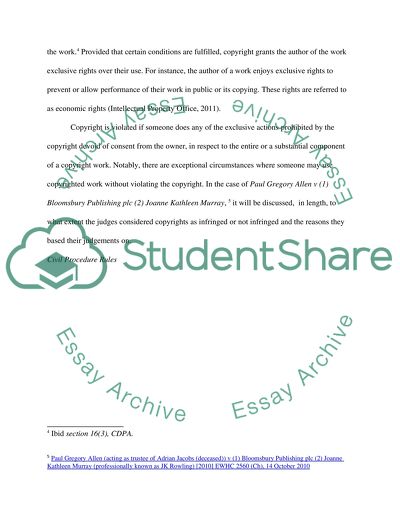 Download file to see previous pages The last named often includes copying of "intellectual property" without authorization in writing from the copyright holder, who in almost all cases is a publisher who has been authorized to act on behalf of the work’s creator (Cornish and Llewelyn, 2007). Through the parliament, the United Kingdom enacted Copyright, Designs and Patents Act 1988 (c. 48), which is also called CDPA. Under section 1 of the Copyright,1 existence of copyright in an original literary work is spelt out. A person is assumed to have violated the Copyright if he does any act that is restricted by the Act, which includes copying literary work without seeking permission from the author or the copyright owner,2 and publicizing copies of the work.3 Breach of the copyright can be committed in respect to the whole of a sizeable part of the work.4 Provided that certain conditions are fulfilled, copyright grants the author of the work exclusive rights over their use. For instance, the author of a work enjoys exclusive rights to prevent or allow performance of their work in public or its copying. These rights are referred to as economic rights (Intellectual Property Office, 2011). Copyright is violated if someone does any of the exclusive actions prohibited by the copyright devoid of consent from the owner, in respect to the entire or a substantial component of a copyright work. Notably, there are exceptional circumstances where someone may use copyrighted work without violating the copyright. In the case of Paul Gregory Allen v (1) Bloomsbury Publishing plc (2) Joanne Kathleen Murray, 5 it will be discussed, in length, to what extent the judges considered copyrights as infringed or not infringed and the reasons they based their judgements on. Civil Procedure Rules A court is charged with the power to grant a summary judgement on the entire claim or on a particular issue or against a claimant or defendant as per rule 24.2, which is enshrined in the Civil Procedure Rules (CPR).6 However, two things must be considered before a summary judgement is granted including that the defendant or the claimant cannot successfully defend the claim and if there is any other gripping purpose why the the case should be taken for trial. Under CPR rule 24.6, security for costs can be put as a condition to act as an option to give a summary judgement (Cornish and Llewelyn, 2007). Facts The famous case between the popular Harry Potter series and the litigant, the Estate of Adrian Jacobs, the author of little known Willy the Wizard, a 16-page 1987 publication, shed new light into copyright issues and brought a completely new perspective into the history of copyright litigation.  Paul Gregory Allen on behalf of the Adrian Jacob estate, alleged that defendant, Scholastic Inc. continued to reproduce, distribute, offer for sale, sell copies of the book by J.K Rowling Harry Potter and the Goblet of Fire, which is "In substance similar to the copyrighted book Willy the Wizard, thus violating the United States Copyright Act. The authors of Harry Potter were therefore accused of violating the right to derivative works and hence the other copyrights of the complainant. This makes the case unique as the court had to decide whether there were ideas that were ...Download file to see next pages Read More
Share:
Tags
Cite this document
(“Intellectual property law Coursework Example | Topics and Well Written Essays - 3000 words”, n.d.)
Intellectual property law Coursework Example | Topics and Well Written Essays - 3000 words. Retrieved from https://studentshare.org/law/1403013-intellectual-property-law

In th...
8 Pages (2000 words) Case Study
sponsored ads
Save Your Time for More Important Things
Let us write or edit the coursework on your topic "Intellectual property law" with a personal 20% discount.
GRAB THE BEST PAPER

Let us find you another Coursework on topic Intellectual property law for FREE!