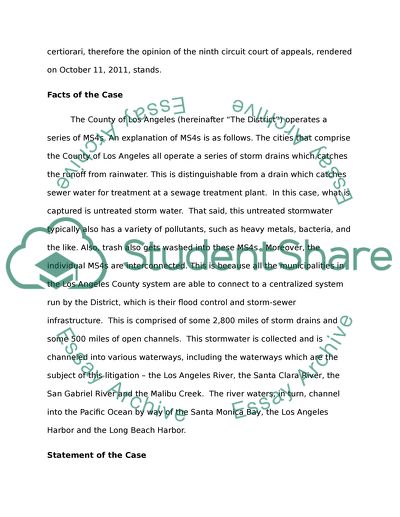 Download file to see previous pages On the first question raised by the plaintiffs, whether navigable waters of the United States include only naturally occurring bodies of water, so that man made improvements to rivers are not considered navigable water, this court denies certiorari, therefore the opinion of the ninth circuit court of appeals, rendered on October 11, 2011, stands. Facts of the Case The County of Los Angeles (hereinafter “The District”) operates a series of MS4s. An explanation of MS4s is as follows. The cities that comprise the County of Los Angeles all operate a series of storm drains which catches the runoff from rainwater. This is distinguishable from a drain which catches sewer water for treatment at a sewage treatment plant. In this case, what is captured is untreated storm water. That said, this untreated stormwater typically also has a variety of pollutants, such as heavy metals, bacteria, and the like. Also, trash also gets washed into these MS4s. Moreover, the individual MS4s are interconnected. This is because all the municipalities in the Los Angeles County system are able to connect to a centralized system run by the District, which is their flood control and storm-sewer infrastructure. This is comprised of some 2,800 miles of storm drains and some 500 miles of open channels. This stormwater is collected and is channeled into various waterways, including the waterways which are the subject of this litigation – the Los Angeles River, the Santa Clara River, the San Gabriel River and the Malibu Creek. The river waters, in turn, channel into the Pacific Ocean by way of the Santa Monica Bay, the Los Angeles Harbor and the Long Beach Harbor. Statement of the Case The procedural history for this case is as follows. In December 2001, the California Regional Water Quality Control Board for the region of Los Angeles, issued a NPDES Permit to 84 cities, in an effort to regulate stormwater and urban runoff discharges. This permit recognized that there could be extraneous sources for the pollutants in waters, and that these extraneous sources would be sources over which the Permittees had no jurisdiction. Each of the permittees were responsible only for its own discharge. The Permit also had monitoring and reporting programs. On March 3, 2008, the respondents, Natural Resources Defense Council and Santa Monica Baykeeper filed a complaint against the City of Los Angeles and others, on the basis that the water quality standards has exceedances of pollutants, which would constitute a violation of the Permit standards. Part of the Respondents argument was that the District was responsible for pollutant exceedances because the monitoring stations were within the channelized portions of the rivers operated by the District as a part of its flood control system, therefore the District was responsible for any exceedances measured there. This argument was rejected by the District Court, who stated that, due to the decision in South Florida Water Management District v. Miccosukee Tribe of Indians, 541 U.S. 95, 105 (2004), that a discharge does not result from moving waters from one portion of a body of water to another. The District Court went on to state that, because of the decision rendered in South Florida, a discharge can only be from a point source. Since the District was not discharging pollutants from a point sourc ...Download file to see next pagesRead More
Share:
Tags
Cite this document
(“Environmental Law Problem Research Paper Example | Topics and Well Written Essays - 6500 words”, n.d.)
Environmental Law Problem Research Paper Example | Topics and Well Written Essays - 6500 words. Retrieved from https://studentshare.org/law/1401973-environmental-law-problem
(Environmental Law Problem Research Paper Example | Topics and Well Written Essays - 6500 Words)
Environmental Law Problem Research Paper Example | Topics and Well Written Essays - 6500 Words. https://studentshare.org/law/1401973-environmental-law-problem.
“Environmental Law Problem Research Paper Example | Topics and Well Written Essays - 6500 Words”, n.d. https://studentshare.org/law/1401973-environmental-law-problem.
Comments (0)
Click to create a comment or rate a document

In th...
8 Pages(2000 words)Case Study
sponsored ads
Save Your Time for More Important Things
Let us write or edit the research paper on your topic "Environmental Law Problem" with a personal 20% discount.
GRAB THE BEST PAPER

Let us find you another Research Paper on topic Environmental Law Problem for FREE!