Comments (0)
Add to wishlist Delete from wishlist
Cite this document
Summary
Knowledge of Admiralty Law is necessary for any individual wishing to raise a claim under the law.This law consists of a combination of domestic laws governing the internal maritime activities and the private international laws…
Download full paper File format: .doc, available for editing
HIDE THIS PAPERGRAB THE BEST PAPER91.9% of users find it useful 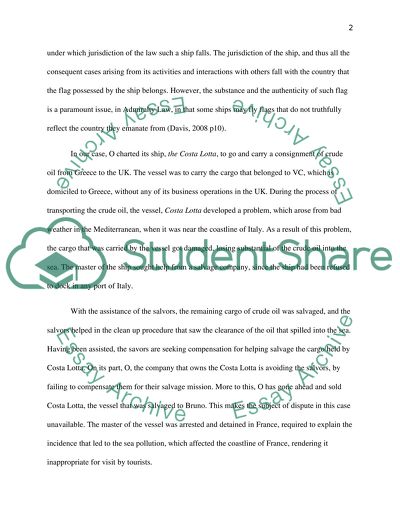 Download file to see previous pages The nature of the rights and remedies, as well as the repercussion of the claims greatly differs, based on who presents the claims, and the nature of such presented claims. For example, the claim that a passenger presents have very different remedies, from such claims presented by the members of the crew (Charles, 2008 p11). Admiralty Law is very dynamic and amorphous, in that it changes the nature of defenses issued, through incorporating into the defense system some defenses that are not stipulated in the common laws, or by removing some standing laws that previously guided this practice. Consequently, the in-depth knowledge of Admiralty Law is necessary for any individual wishing to raise a claim under the law (Frakes, 2003 p22). This law consists of a combination of domestic laws governing the internal maritime activities and the private international laws, which guides the activities and the interactions of private entities that are operating within the seas (Eliot, 1963 p20). The component o this law are major international treaties which have been enacted in the recent decades, to guide the relationships and business undertakings between countries and the private entities on the seas. The flag that a ship flies in the high seas determines under which jurisdiction of the law such a ship falls. The jurisdiction of the ship, and thus all the consequent cases arising from its activities and interactions with others fall with the country that the flag possessed by the ship belongs. However, the substance and the authenticity of such flag is a paramount issue, in Admiralty Law, in that some ships may fly flags that do not truthfully reflect the country they emanate from (Davis, 2008 p10). In our case, O charted its ship, the Costa Lotta, to go and carry a consignment of crude oil from Greece to the UK. The vessel was to carry the cargo that belonged to VC, which is domiciled to Greece, without any of its business operations in the UK. During the process of transporting the crude oil, the vessel, Costa Lotta developed a problem, which arose from bad weather in the Mediterranean, when it was near the coastline of Italy. As a result of this problem, the cargo that was carried by the vessel got damaged, losing substantial of the crude oil into the sea. The master of the ship sought help from a salvage company, since the ship had been refused to dock in any port of Italy. With the assistance of the salvors, the remaining cargo of crude oil was salvaged, and the salvors helped in the clean up procedure that saw the clearance of the oil that spilled into the sea. Having been assisted, the savors are seeking compensation for helping salvage the cargo held by Costa Lotta. On its part, O, the company that owns the Costa Lotta is avoiding the salvors, by failing to compensate them for their salvage mission. More to this, O has gone ahead and sold Costa Lotta, the vessel that was salvaged to Bruno. This makes the subject of dispute in this case unavailable. The master of the vessel was arrested and detained in France, required to explain the incidence that led to the sea pollution, which affected the coastline of France, rendering it inappropriate for visit by tourists. On the other hand, VC, the company that owned the cargo that was being transported by Costa Lotta has failed to complete the payment. VC argues that the loss of cargo that was incurred by the company should be set off against the remaining payment to O. Additionally; VC argues that the loss occurred due to the incompetence of the master of Costa Lotta. Thus, there are many legal issues underlining this case, which can be traced to the Admiralty Law. The first legal issue is whether O will succeed in raising a claim ...Download file to see next pages Read More
Share:
Tags
Cite this document
(“Admiralty law Coursework Example | Topics and Well Written Essays - 3250 words”, n.d.)
Retrieved from https://studentshare.org/law/1398772-admiralty-law

CHECK THESE SAMPLES OF Admiralty law

In th...
8 Pages (2000 words) Case Study
sponsored ads
Save Your Time for More Important Things
Let us write or edit the coursework on your topic "Admiralty law" with a personal 20% discount.
GRAB THE BEST PAPER

Let us find you another Coursework on topic Admiralty law for FREE!