Comments (0)
Add to wishlistDelete from wishlist
Cite this document
Summary
EMPLOYMENT AND CONTRACT LAW Abstract A contract involves making a promise made in the specified manner which is recognized by the law and it undertakes a legal binding obligation. The paper examines the various conditions, in which, a contract is formed and it tries to analyse the condition when the contracts cannot be enforced simply because it involves promises…
Download full paperFile format: .doc, available for editing
HIDE THIS PAPERGRAB THE BEST PAPER93.1% of users find it useful 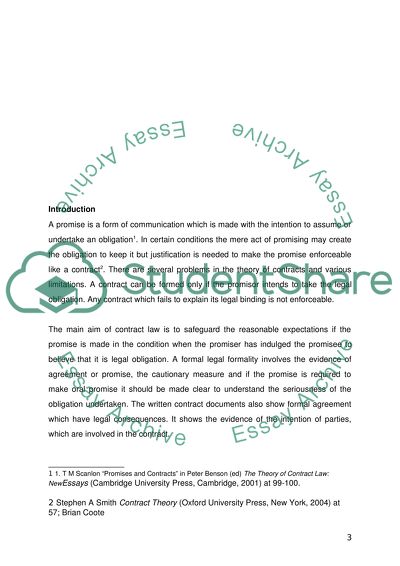 Download file to see previous pages There are several problems in the theory of contracts and various limitations. A contract can be formed only if the promisor intends to take the legal obligation. Any contract which fails to explain its legal binding is not enforceable. The main aim of contract law is to safeguard the reasonable expectations if the promise is made in the condition when the promiser has indulged the promisee to believe that it is legal obligation. A formal legal formality involves the evidence of agreement or promise, the cautionary measure and if the promise is required to make oral promise it should be made clear to understand the seriousness of the obligation undertaken. The written contract documents also show formal agreement which have legal consequences. It shows the evidence of the intention of parties, which are involved in the contract. The research in 2007 on unfair trade practices and consumers found that consumer may or may not have a link between signed contract for the product or service and consciously entering into a contract3. Employment Law and Contract Charlie Totara of Green Island Enviro-Tours Ltd (GIETL) is planning to hire casual employees. The rule governing individual employment agreements, over the groups of staff fall under a specific category and are legally obliged under the Employment Relations Act 20004. The employment relation Act 2000 requires the agreements to be mentioned in writing and the agreement are essential for every business. The employers run the risk of getting into problem in case of disputes. The rights of employee and employer are protected by the law. If the employee is mistreated by the employee, or the employee misuses company’s properties, the agreement can be used to address the issue. The employee relation act states nine points are significant in individual employment agreement - 1. The name of employee and employer 2. The description of work 3. The location 4. The time of work 5. The salary 6. The explanation of services which will be used to resolve problems 7. The payment term for holidays 8. The redundancy process 9. In case 90 day trial period is used, the statement should be included, which declares the procedure of dismissal. Individual Employment Agreement between an Employer and an Employee Individual Employment Agreement between an Employer and an Employee 1 The Parties 1.1 Individual Employment Agreement The parties to this employment agreement are: 1. GIETL, the "Employer"; and 2. Insert employee's name, the "Employee". 2 The Position and the Duties 2.1 Position The Employee is being employed as Tour guides and assistant. 2.2 Duties as set out in the job description The Employee shall perform the duties set out in the Job Description attached to this agreement. 1. Guiding tourists 2. Communicating with the tourists These duties may be modified and updated by the Employer from time to time following agreement with the Employee. The Employee also agrees to perform all other reasonable duties and comply with reasonable instructions issued by the Employer. 3 Nature and Term of the Agreement 3.1 Casual Individual Employment Agreement (Intermittent) This Employment Agreement is an individual employment agreement entered into under the Employment Relations Act 2000. The parties to this agreement agree that the nature of the relationship is a casual "as required" employment relatio ...Download file to see next pagesRead More
Share:
Tags
Cite this document
(“Employment and contract law Assignment Example | Topics and Well Written Essays - 4000 words”, n.d.)
Retrieved from https://studentshare.org/law/1398767-employment-and-contract-law
(Employment and Contract Law Assignment Example | Topics and Well Written Essays - 4000 Words)
https://studentshare.org/law/1398767-employment-and-contract-law.
“Employment and Contract Law Assignment Example | Topics and Well Written Essays - 4000 Words”, n.d. https://studentshare.org/law/1398767-employment-and-contract-law.
Comments (0)
Click to create a comment or rate a document

CHECK THESE SAMPLES OF Employment and contract law

In th...
8 Pages(2000 words)Case Study
sponsored ads
Save Your Time for More Important Things
Let us write or edit the assignment on your topic "Employment and contract law" with a personal 20% discount.
GRAB THE BEST PAPER

Let us find you another Assignment on topic Employment and contract law for FREE!