Comments (0)
Add to wishlistDelete from wishlist
Cite this document
Summary
Foreseeability
In an event that the plaintiff fails to prove any one element, then he or she loses the entire tort of negligence claim. The following elements should be proved: factual and legal causation, duty of care, damages, and breach of duty…
Download full paperFile format: .doc, available for editing
HIDE THIS PAPERGRAB THE BEST PAPER93.7% of users find it useful 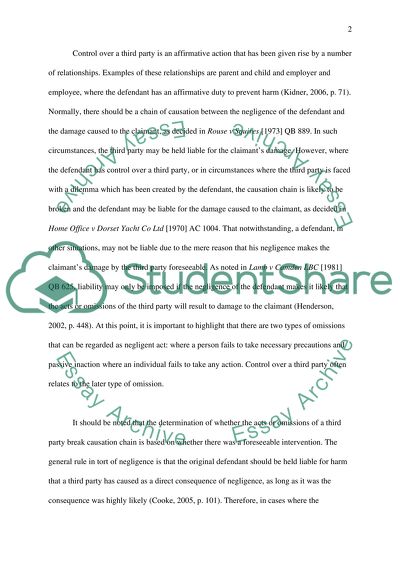 Download file to see previous pages The essence of existence of specific relationship between parties to establish negligence claims is based on the logic that such a claim can only arise in acts and omissions relating to these elements (Cooke, 2005, p. 12). Normally, it is assumed that such claims can be levelled against a third party because such party is liable for acts or omissions that led to harm, injury, or loss. However, in some circumstances, an individual may be in specific relationship with a third party and have a duty to control the conduct of the third party so as to prevent harm, injury, or loss to the claimant (Kidner, 2006, p.25). Control over the third party includes but not limited to the following: parent and child, car owner and a drunken or incompetent driver, mental hospital and patient, parent and child, and gaoler and prisoner. The need for control over a third party is informed by the position taken by Lord Goff in Smith v Littlewoods [1987] 1 All ER 710 at 731 when analyzing the rule of mere- omissions and making considerations for the exceptions to this rule. Lord Goff argued that there are some circumstances where the courts have established affirmative action duties. One of these circumstances is that the defendant has control over a third party who has caused damage to the claimant.
Control over a third party is an affirmative action that has been given rise by a number of relationships. Examples of these relationships are parent and child and employer and employee, where the defendant has an affirmative duty to prevent harm (Kidner, 2006, p. 71). Normally, there should be a chain of causation between the negligence of the defendant and the damage caused to the claimant, as decided in Rouse v Squires [1973] QB 889. In such circumstances, the third party may be held liable for the claimant’s damage. However, where the defendant has control over a third party, or in circumstances where the third party is ...Download file to see next pagesRead More
Share:
Tags
Cite this document
(“Foreseeability. Negligence and Tort Assignment Example | Topics and Well Written Essays - 3000 words”, n.d.)
Retrieved from https://studentshare.org/law/1396024-foreseeability-negligence-and-tort

CHECK THESE SAMPLES OF Foreseeability. Negligence and Tort

The Relationship between Contract and Tort in the Law of Obligations

It is always necessary to determine the scope of that duty by reference to the kind of damage…”*. In the case of Sutherland Council v Heyman, Brennan J commented; “The question is always whether the defendant was under a duty to avoid or prevent that damage, but the actual nature of the damage suffered is relevant to the existence and the extent of any duty to prevent it.”*4 Contractual breaches are treated on par with negligence. In English law, the case of Hedley Byrne v Heller*5 has expanded the law of negligence to include misrepresentation in contracts, thereby further blurring the boundaries between contract and tort law.
Ibbetson highlights the interrelationship between contract and tort...
8 Pages(2000 words)Coursework

The realistic effect of the test is that a judge will heed substantiation from experts in the suitable speciality and should decide whether the measures of the doctor/midwife/nurse etc. were appropriate. Frequently there are numerous acceptable ways of doing somewhat and conformity with any of these will mean that there was no breach of duty of care. Logically experts frequently disagree over these matters and the judge should decide whose substantiation is to be favored.
Professional men and women are administrated by the standard of care of a normal person of their profession or specialism: the test is the standard of the normal skilled man exercising and admitting to having that special skill. An expansion of this is the s...
10 Pages(2500 words)Coursework

All Possible Negligence Claims in the Business Law

...Critically discuss all possible negligence claims that could be brought in the below situations and advise the various parties of all the elements that would have to be proven in respect of such claims: Tort of Negligence: Elements – Duty of Care: The elements of negligence are duty of care; breach of that duty of care; causation, i.e. a causal link between the individual’s injury or property damage; and actual damage either to a person or to property. Each of these elements are essential to a successful claim under the law of tort, however the first step is to consider whether there is a duty of care between the injured person and the person whose actions have caused it. There are two branches of duty of care, those duties recognised...
10 Pages(2500 words)Assignment

In criminal law, the state is portrayed as the bigger offended party than the plaintiff such that if a defendant is proven guilty the state metes out the appropriate punishment.  It is different in tort cases, in which the plaintiff, whose more popular assignation now is “claimant,” is the victim of the alleged wrong.  Once the defendant is found liable he is directed by the court to pay damages to the claimant or else to desist from the wrongful activity through “injunctive relief.” Compensation and deterrence are two of the four main purposes of a tort, the other two being appeasement and justice (Williams, 1951).

The types of torts in England and Wales are limited to trespass t...
9 Pages(2250 words)Case Study

In applying the test, it must be established that it would be reasonable for Doctor Green to have foreseen that the damage to Charles would have been caused as a result of any negligence or misconduct and as such, should have taken precautions against this. If we apply this to the current scenario, it is evident that as a trained medic, Doctor Green would have foreseen that failure to take proper care in diagnosing and treating Charles would result in damage to Charles’ health. This appears to be further bolstered by claims by consultant Doctor Brown that Charles may have healed normally had he been correctly diagnosed and treated by Doctor Green. As regards the liability of Wellington Hospital, as soon as Charles entered We...
10 Pages(2500 words)Coursework

The Issues as to Potential Civil Claims under the Torts of Negligence, Assault, and Battery

The first hurdle for Bertie is to establish that Freddie owed Bertie a duty of care.  The test for whether or not there is a legal duty of care was established in the case of Donoghue v Stevenson1. Lord Atkin asserted that a manufacturer owed a legal duty of care to the ultimate consumer of his product. In discussing the duty of care as a legal concept in the tort of negligence, Lord Atkin established the “neighbor” principle.
Lord Atkins continued to define the term “neighbor” in the legal sense as being “persons who are so closely and directly affected by my act that I ought to reasonably to have them in contemplation as being so affected.2”

Being a public organisation, the Council had the duty of ensuring that anyone who builds on the land adhered to the limitation and/or the potential limitations that the toxic substances found on the land caused.
Thus, in granting the authorisation to build on the land, the Council should have factored that in before considering whether to grant or reject the license to build. However, they went ahead and granted a license to Max which gave him the right to build or advertise for others to build on the land.
It is therefore conclusive that by granting the authorisation to build on the land, when the council was privy to information about the dangers of inhabiting the land and the potential freeze on the land, the council wa...
6 Pages(1500 words)Case Study
sponsored ads
Save Your Time for More Important Things
Let us write or edit the assignment on your topic "Foreseeability. Negligence and Tort" with a personal 20% discount.
GRAB THE BEST PAPER

Let us find you another Assignment on topic Foreseeability. Negligence and Tort for FREE!