Comments (0)
Add to wishlist Delete from wishlist
Cite this document
Summary
I TORTIOUS LIABILITY OF ALEX A. Factual matrix material to the potential lis 1. Alex is the source of information which prima facie appears to be defamatory (See infra), is false and published; 2. Alex has disclosed the information to Barbera (who caused publishing) without knowledge of the fact that the information will be published…
Download full paper File format: .doc, available for editing
HIDE THIS PAPERGRAB THE BEST PAPER97.3% of users find it useful 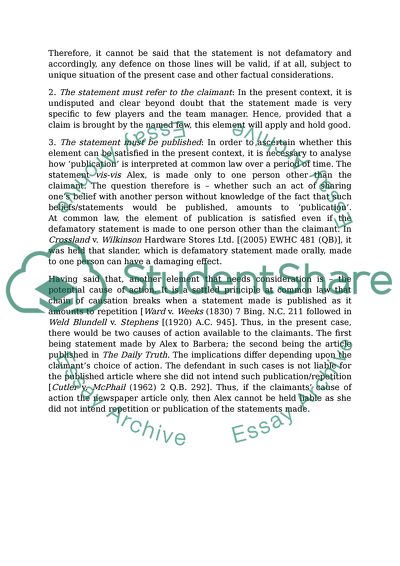 Download file to see previous pages According to Winfield & Jolowicz (Tort, 17th ed. ; WVH Rogers ed), in order to hold the defendant liable for defamation, the claimant has to prove the following elements: 1. The statement must be defamatory; 2. The statement must refer to the claimant; 3. It must be published i.e. communicated to atleast one person other than the claimant. The aforementioned principles as applies to the present context in the following manner: 1. The statement must be defamatory: The statements made by Alex were to the effect of degrading public image of the players and team manager. Besides causing harm to their reputation in public, the statement also tends to raise ethical questions on the players and the team manager and hence lowers them in the public eye. Vide Lord Atkin’s judgement in Sim v. Strech [(1936) 52 TLR 669], it is now the settled position of law that any statement that tends to lower the claimant in the estimation of right thinking members of the society can be defamatory. This position has been reemphasised in several of the recent judgements as well. Therefore, it cannot be said that the statement is not defamatory and accordingly, any defence on those lines will be valid, if at all, subject to unique situation of the present case and other factual considerations. 2. The statement must refer to the claimant: In the present context, it is undisputed and clear beyond doubt that the statement made is very specific to few players and the team manager. Hence, provided that a claim is brought by the named few, this element will apply and hold good. 3. The statement must be published: In order to ascertain whether this element can be satisfied in the present context, it is necessary to analyse how ‘publication’ is interpreted at common law over a period of time. The statement vis-vis Alex, is made only to one person other than the claimant. The question therefore is – whether such an act of sharing one’s belief with another person without knowledge of the fact that such beliefs/statements would be published, amounts to ‘publication’. At common law, the element of publication is satisfied even if the defamatory statement is made to one person other than the claimant. In Crossland v. Wilkinson Hardware Stores Ltd. [(2005) EWHC 481 (QB)], it was held that slander, which is defamatory statement made orally, made to one person can have a damaging effect. Having said that, another element that needs consideration is – the potential cause of action. It is a settled principle at common law that chain of causation breaks when a statement made is published as it amounts to repetition [Ward v. Weeks (1830) 7 Bing. N.C. 211 followed in Weld Blundell v. Stephens [(1920) A.C. 945]. Thus, in the present case, there would be two causes of action available to the claimants. The first being statement made by Alex to Barbera; the second being the article published in The Daily Truth. The implications differ depending upon the claimant’s choice of action. The defendant in such cases is not liable for the published article where she did not intend such publication/repetition [Cutler v. McPhail (1962) 2 Q.B. 292]. Thus, if the claimants’ cause of action the newspaper article only, then Alex cannot be held liable as she did not intend repetition or publication of the statements made. II TORTIOUS LIABILITY OF BARBERA A. Factual matrix material to the potential lis 1. Barbera has obtained ...Download file to see next pages Read More
Share:
Tags
Cite this document
(“Tort Law Coursework Example | Topics and Well Written Essays - 1500 words”, n.d.)
Retrieved from https://studentshare.org/law/1395086-tort-law

In th...
8 Pages (2000 words) Case Study
sponsored ads
Save Your Time for More Important Things
Let us write or edit the coursework on your topic "Tort Law" with a personal 20% discount.
GRAB THE BEST PAPER

Let us find you another Coursework on topic Tort Law for FREE!