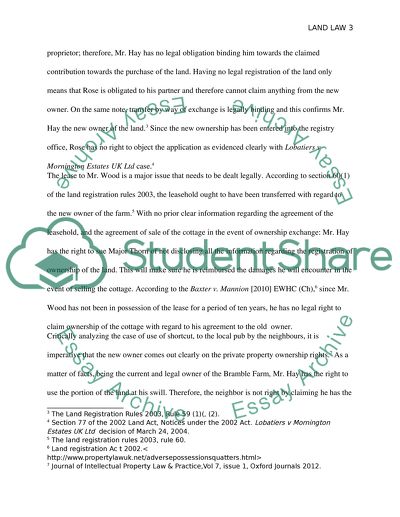 Download file to see previous pages (iv) Removal of ornamental bronze statue of an African elephant and its plinth after contract exchange but before completion date. Mr. Hay without prior knowledge of the impending outcomes went ahead and acquired Bramble Farm from Mr. Major Thorn. He failed to ascertain the legality of the ownership of the land by Major Thorn from the land registry offices which could have helped him get a clear copy of the any other owner of the land. According to Land Registration Rules 2003,1 inspection of the land ownership is allowed to ascertain true ownership. The above issues ought to be dealt accordingly as discussed below so as Mr. Hay remains the legal and owner of Bramble farm, without impending conflicts. Rose having been in possession for ownership for the Land for a similar period as Major Thorn has equal rights to the land and therefore was legal entity that could have been consulted prior to the sale agreement. According to the Land Registration Act 2002,2 Rose having in possession of the land for more than ten years is deemed by law as a legal partner in the farm. The advantage with Mr. Hay is that according to the land registry document, Rose is not recognised as a proprietor; therefore, Mr. Hay has no legal obligation binding him towards the claimed contribution towards the purchase of the land. Having no legal registration of the land only means that Rose is obligated to his partner and therefore cannot claim anything from the new owner. On the same note, transfer by way of exchange is legally binding and this confirms Mr. Hay the new owner of the land.3 Since the new ownership has been entered into the registry office, Rose has no right to object the application as evidenced clearly with Lobatiers v Mornington Estates UK Ltd case.4 The lease to Mr. Wood is a major issue that needs to be dealt legally. According to section 60(1) of the land registration rules 2003, the leasehold ought to have been transferred with regard to the new owner of the farm.5 With no prior clear information regarding the agreement of the leasehold, and the agreement of sale of the cottage in the event of ownership exchange: Mr. Hay has the right to sue Major Thorn of not disclosing all the information regarding the registration of ownership of the land. This will make sure he is reimbursed the damages he will encounter in the event of selling the cottage. According to the Baxter v. Mannion [2010] EWHC (Ch),6 since Mr. Wood has not been in possession of the lease for a period of ten years, he has no legal right to claim ownership of the cottage with regard to his agreement to the old owner. Critically analyzing the case of use of shortcut, to the local pub by the neighbours, it is imperative that the new owner comes out clearly on the private property ownership rights.7 As a matter of facts, being the current and legal owner of the Bramble Farm, Mr. Hay has the right to use the portion of the land at his swill. Therefore, the neighbor is not right by claiming he has the right to pass through the shortcut without the permission of the new owner on the basis that he had per mission from the former. According to section 118 of the Land Registration rules 2003 to acquire a legal determination of the exact line of boundary.8 These will culminate to the acquiring of a plan, or a plan and a verbal description of the exact boundary to the farm. Further, Mr. Hay should erect a fence or a barrier to the side where the ...Download file to see next pages Read More
Share:
Tags
Cite this document
(“Land law Coursework Example | Topics and Well Written Essays - 1500 words”, n.d.)
Retrieved from https://studentshare.org/law/1394337-land-law

CHECK THESE SAMPLES OF Land law

In th...
8 Pages (2000 words) Case Study
sponsored ads
Save Your Time for More Important Things
Let us write or edit the coursework on your topic "Land law" with a personal 20% discount.
GRAB THE BEST PAPER

Let us find you another Coursework on topic Land law for FREE!