Comments (0)
Add to wishlist Delete from wishlist
Cite this document
Summary
Author Date 1.0 Introduction Extradition is the authorized procedure whereby one country or nation surrenders a convicted or suspected criminal to another country or nation but among the country states, extradition is synchronized by treaties. Where extradition is compelled by laws, such as among sub-national jurisdictions, the concept may be known more generally as rendition…
Download full paper File format: .doc, available for editing
HIDE THIS PAPERGRAB THE BEST PAPER94.1% of users find it useful 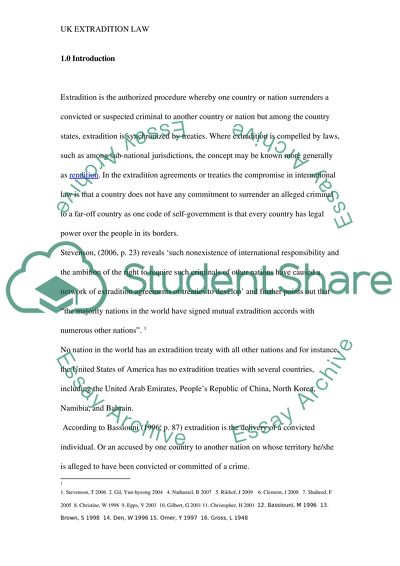 Download file to see previous pages Stevenson, (2006, p. 23 ) reveals ‘such nonexistence of international responsibility and the ambition of the right to require such criminals of other nations have caused a network of extradition agreements or treaties to develop’ and further points out that “the majority nations in the world have signed mutual extradition accords with numerous other nations”. 1 No nation in the world has an extradition treaty with all other nations and for instance, the United States of America has no extradition treaties with several countries, including the United Arab Emirates, People’s Republic of China, North Korea, Namibia, and Bahrain. According to Bassiouni (1996, p. 87) extradition is the delivery of a convicted individual. Or an accused by one country to another nation on whose territory he/she is alleged to have been convicted or committed of a crime. 2.0 Restrictions By concluding treaties or enacting laws or agreements, nations settle on the conditions under which they may perhaps deny or entertain extradition requests. Universal restrictions to extradition comprise of: According to Christopher (2001, p. 345) ‘the failure to execute double criminality is normally the act for which extradition is sought after’’ But “it must comprise of a crime which is punishable by some minimum penalty in equally the requested and requesting and parties”. 2 He points out to the political atmosphere of the alleged crime where the majority of the nations decline to extradite suspects of political crimes, there is the possibility of particular forms of punishment where various nations refuse extradition on grounds that the individual, if extradited, may possibly face torture or get capital punishment. A small number of these nations go as far as to cover all the punishments that they themselves may not direct. Christine (1998, p. 78) writes that the jurisdiction over a crime may be used to refuse any extradition and in particular, the reality that the individual in question is a country’s own citizen, makes that nation to have jurisdiction but he states that the citizenship of the individual in question where particular countries refuse to extradite their own citizens, and instead decide to hold trials for the individuals themselves. In some cases, such as that of Hafiz Muhammad Saeed, the suspect can not face any criminal charges brought against them. 3 Nathaniel (2007, p. 37) avers that most nations involve themselves to deny the extradition requirements if, in the government's opinion, the suspect is wanted for a political crime. He however avers that “many nations and regions, such as Mexico, Macao, Canada, Australia and most European nations, ‘may not consent to extradition if the death penalty might be imposed on the suspect unless they are guaranteed that the death sentence will not be carried out or passed”. 4 Rikhof (2009, pg. 324) gives an example, in ‘the case of one Soering v. United States, the European Court of Human Rights ruled that it could violate Article 3 of the European Convention of Human Rights if it were to extradite an individual to the U. S. from the U.K. in a capital case’. He however discloses that court ruled out that this “was because of the harsh circumstances on death row and the doubtful timescale in which the sentence could be executed and the parties to the European Conv ...Download file to see next pages Read More
Share:
Tags
Cite this document
(“UK extradition law Coursework Example | Topics and Well Written Essays - 3000 words”, n.d.)
Retrieved from https://studentshare.org/law/1393298-public-international-law

In th...
8 Pages (2000 words) Case Study
sponsored ads
Save Your Time for More Important Things
Let us write or edit the coursework on your topic "UK extradition law" with a personal 20% discount.
GRAB THE BEST PAPER

Let us find you another Coursework on topic UK extradition law for FREE!