Comments (0)
Add to wishlist Delete from wishlist
Cite this document
Summary
DUI: Reckless and Zero Tolerance
It is difficult to ignore the impact and volume of DUI deaths and the overall annual cost to society in the US. Likewise, the number of arrests and convictions for offenses related to alcohol annually across the US is equally alarming.
…
Download full paper File format: .doc, available for editing
HIDE THIS PAPERGRAB THE BEST PAPER93.6% of users find it useful 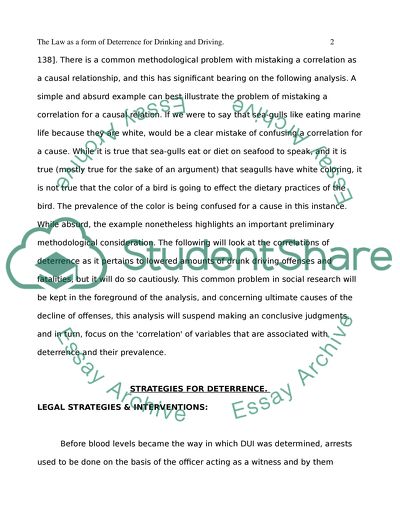 Download file to see previous pages According to the National Highway Traffic Safety Administration (NHTSA), in the reporting year 2009, alcohol related offenses across the US totaled 15,331 out of 71,048 traffic related offenses, and some studies have placed this estimate at as much as 60 % of all fatalities. Stated in terms of a percentage, this represents over 20 % of all traffic offenses According to the NHTSA, this is a drop overall in the past few decades which coincides with tougher sentencing, greater public awareness and higher conviction rates. However, the numbers continue to be alarming which means that something within the correlation of deterrence and public perception along with convictions and arrests has not been entirely successful. The following will argue that however much deterrence is a factor in the decline of incidents, it is not sufficient to make that much of a significant impact. Toward demonstrating this thesis, the following will look at the legal and social transformations that have taken place, and in turn, examine the nature of deterrence.
Before examining the data, existing literature and arguments for and against the relative success of deterrence, a few remarks concerning methodology need to be stated or outlined. In the field of social research, and indeed, any scientific research, there is an important distinction to be made between a correlation and an association that is causal in nature. [Kothari, 2008, p. 138]. There is a common methodological problem with mistaking a correlation as a causal relationship, and this has significant bearing on the following analysis. A simple and absurd example can best illustrate the problem of mistaking a correlation for a causal relation. If we were to say that sea-gulls like eating marine life because they are white, would be a clear mistake of confusing a correlation for a cause. While it is true that sea-gulls eat or diet on seafood to speak, and it is true (mostly true for the sake of an argument) that seagulls have white coloring, it is not true that the color of a bird is going to effect the dietary practices of the bird. The prevalence of the color is being confused for a cause in this instance. While absurd, the example nonetheless highlights an important preliminary methodological consideration. The following will look at the correlations of deterrence as it pertains to lowered amounts of drunk driving offenses and fatalities, but it will do so cautiously. This common problem in social research will be kept in the foreground of the analysis, and concerning ultimate causes of the decline of offenses, this analysis will suspend making an conclusive judgments, and in turn, focus on the 'correlation' of variables that are associated with deterrence and their prevalence. STRATEGIES FOR DETERRENCE. LEGAL STRATEGIES & INTERVENTIONS: Before blood levels became the way in which DUI was determined, arrests used to be done on the basis of the officer acting as a witness and by them administering some basic road-side tests that would evaluate the co-ordination and response time of the individual who was suspected of DUI [Chambliss, 2011, p. 63]. Because of the relatively subjective nature of the investigating techniques, and many of the successful challenges to the enforcement of this, the measurement of blood alcohol levels, through blood, breath and urine, became the more accurate standard, and in almost all states the blood alcohol line is .08 % [Chambliss, 2011, p. 64]. Moreover, a more accurate way of measuring blood alcohol levels, impacted the conviction rate for offenders [Chambliss, 2011, p. 65]. However, it did also create a few problems regarding the administration of the test. If a police officer suspects a driver of DUI they can ask them to submit themselves to a ...Download file to see next pages Read More
Share:
Tags
Cite this document
(“The Law as a form of Deterrence for Drinking and Driving Research Paper”, n.d.)
Retrieved de https://studentshare.org/law/1390845-the-law-as-a-form-of-deterrence-for-drinking-and-driving

(The Law As a Form of Deterrence for Drinking and Driving Research Paper)
https://studentshare.org/law/1390845-the-law-as-a-form-of-deterrence-for-drinking-and-driving.

“The Law As a Form of Deterrence for Drinking and Driving Research Paper”, n.d. https://studentshare.org/law/1390845-the-law-as-a-form-of-deterrence-for-drinking-and-driving.
Comments (0)
Click to create a comment or rate a document

Some of the smaller spires (sides) and pavilions are around the base of the central stupa while others are in remote corners of the wide esplanade that encircles the pagoda (as seen in Figures 1-3 below). The platform measuring around 280 by 220 meters was leveled more than 2000 years ago, long before founding the city of Rangoon, which is the present-day Yangon. The spacious pavilion surrounding the pagoda promotes devotees’ engaging in prayer and facilitates their walking around the pagoda, which is part of the worship. The Shwedagon Pagoda road is lined with monasteries, rest houses (zayat), and other pagodas such as the Maha Vijaya opposite the southern stairs (Falconer et al, 2001: 55).
According to the legendary h...
7 Pages (1750 words) Case Study

In th...
8 Pages (2000 words) Case Study
sponsored ads
Save Your Time for More Important Things
Let us write or edit the research paper on your topic "The Law as a form of Deterrence for Drinking and Driving" with a personal 20% discount.
GRAB THE BEST PAPER

Let us find you another Research Paper on topic The Law as a form of Deterrence for Drinking and Driving for FREE!