Comments (0)
Add to wishlistDelete from wishlist
Cite this document
Summary
Distributed and parallel processing is a well-organized way of enhancing performance of DBMSs (Data-Base Management Systems) and systems that…
Download full paperFile format: .doc, available for editing
HIDE THIS PAPERGRAB THE BEST PAPER93.2% of users find it useful 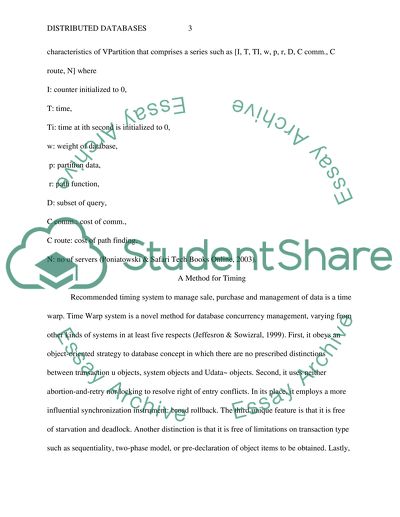 Distributed Databases Introduction A distributed database (DDB) is a compilation of numerous, logically interconnected databases distributed through a computer system. Distributed and parallel processing is a well-organized way of enhancing performance of DBMSs (Data-Base Management Systems) and systems that control large volumes of data (Abuelyaman, 2008). The main concern of DBMS structure is the partitioning and allocation of the fundamental hypothesis partitioning techniques. This paper seeks to find a suitable distributed database that can fit two small retail stores.
A partitioning scheme
This paper recommends a scheme for vertical partitioning of a distributed database. Vertical partitioning involves creating of tables with fewer columns and utilizing additional tables to keep the outstanding columns. Normalization also comprises this partitioning of columns within tables, but vertical partitioning goes further than that and fragments columns even when normalized. Different physical storeroom might be applied to comprehend vertical fragmenting. Non relational databases initiated the idea of column based databases (Abuelyaman, 2008). The rationale for choosing this partitioning scheme is that it is cost efficient more than other schemes. In addition, it fits the required distributed databases required for this work. In order to surpass the limitations of accessible partitioning algorithm; a fresh algorithm known as VPartition, is recommended that enhances the performance of the current algorithm. The algorithm comprises an enhanced vertical partitioning system where cost is computed in terms of time utilizing greedy technique (Poniatowski & Safari Tech Books Online, 2003). This leads to improved data consignment as compared to earlier approach. The characteristics of VPartition that comprises a series such as [I, T, TI, w, p, r, D, C comm., C route, N] where
I: counter initialized to 0,
T: time,
Ti: time at ith second is initialized to 0,
w: weight of database,
p: partition data,
r: path function,
D: subset of query,
C comm.: cost of comm.,
C route: cost of path finding,
N: no of servers (Poniatowski & Safari Tech Books Online, 2003).
A Method for Timing
Recommended timing system to manage sale, purchase and management of data is a time warp. Time Warp system is a novel method for database concurrency management, varying from other kinds of systems in at least five respects (Jeffesron & Sowizral, 1999). First, it obeys an object-oriented strategy to database concept in which there are no prescribed distinctions between transaction u objects, system objects and Udata~ objects. Second, it uses neither abortion-and-retry nor locking to resolve right of entry conflicts. In its place, it employs a more influential synchronization instrument: broad rollback. The third unique feature is that it is free of starvation and deadlock. Another distinction is that it is free of limitations on transaction type such as sequentiality, two-phase model, or pre-declaration of object items to be obtained. Lastly, it introduces the concept of the virtual time, a simulated time scope from which business timestamps are drafted (Jeffesron & Sowizral, 1999). The virtual instance of a transaction is never altered after it is allocated, and activities are guaranteed be dedicated strictly in virtual time sequence.
Location limitation is associated with geographical distances that are created when the business goes globally. However, this is catered for through distribution database. A distributed database is a distinct logical system that is distributed physically across systems in numerous locations that are linked by a data communications system.
References
Abuelyaman, S. E. (2008). An Optimized Scheme for Vertical Partitioning of a Distributed Database. IJCSNS International Journal of Computer Science and Network Security, VOL.8 No.1,
Jeffesron D.R. and Sowizral H. A. (1999). Fast Concurrent Simulation Using the Time Warp Mechanism, Part H: Global Control. Technical Report, Rand Corporation, Santa Monica,California
Poniatowski, M., & Safari Tech Books Online. (2003). HP-UX 11i system administration handbook and toolkit. Upper Saddle River, N.J: Prentice Hall PTR. Read More
Share:
Tags
Cite this document
(“Distributed databases Research Paper Example | Topics and Well Written Essays - 500 words”, n.d.)
Distributed databases Research Paper Example | Topics and Well Written Essays - 500 words. Retrieved from https://studentshare.org/information-technology/1630165-distributed-databases

CHECK THESE SAMPLES OF Distributed databases

...? In every organization that values information technology, a database is used to organize and manipulate data for ease of management. The database also helps in making decisions as it provides specific data relating to various objects in real time. The article provides an overview of what databases are, how they are used, and their advantages and disadvantages. Table of Contents Abstract 1 Introduction 3 Types of Databases 3 Databases Management Systems 4 Use and Roles of Databases in Organisations 5 References 7 Databases Introduction Different experts define the term database differently. Stephens (2010) defines a database simply as a tool that stores data. Stephens further notes that the database gives one the opportunity to create...
4 Pages(1000 words)Essay

...h as recursive queries, triggers and XMLs just to mention a few. In as much as the instructions in the SQL may be command line, they are divided into several elements, which include expressions, predicates etc which make it easier for the user to handle. SQL is a rather easier language for a user who is already acquainted with its use. References Gehani, N. (2006). The Database Book: Principles and practice using MySQL. Summit, NJ.: Silicon Press Nadeau, T. Lightstone, S. (2005) Database Modeling & Design: Logical Design, 4th edition, Morgan Kaufmann Press Ozsu, M & Valduriez, P. (2011). Principles of Distributed Databases (3rd edition), Springer O'Brien, J. & Marakas, M.(2008) Management Information Systems. New York, NY: McGraw-Hill...
4 Pages(1000 words)Essay

.... The basic purpose of implementing distributed databases is to offer higher reliability and superior performance. Without a doubt, the division of a database into multiple locations can provide a number of advantages to organizations (Holmes; Hoffer, Prescott and McFadden). Additionally, this way of data storage offers superior control over particular data. In this scenario, the load of the database management is divided among several hardware devices and burden of processing is shifted from a single location to multiple locations. Normally, a distributed database is developed on the basis of business departments, or geographical areas...
10 Pages(2500 words)Essay

Due to time limitation, this problem has not been resolved yet and therefore, the application still requires to be fine tuned to allow it to be run through IIS rather than involving Visual Studio’s internal ASP.NET Development Server.
Currently, this application’s backend, SQL Server 2005, does not store any data locally. It simply contains two linked servers which are called whenever the application requires carrying out some data operation – viewing, inserting and updating records. Excessive communication with linked servers may result in increase of network traffic, hence, minimizing the performance of only the application itself but of the entire corporate network as well.
Therefore, it is very important to maintain so...
12 Pages(3000 words)Essay

... to acknowledge that this article has outlined a significant set of valuable information about distributed systems. This is specifically on issues based on controlling concurrency of organization data and most importantly, the security of data and transactions handles by distributed database systems. The authors of the article address indicate that concurrency control and security threat is a very crucial subject of concern in distributed database networks. The article goes further to clarify that there has been no guarantee of execution of secure database transactions in most distributed databases. Specifically, the author outlines that, there is no clear platform for ascertaining that database transactions are always maintaining the ACID...
4 Pages(1000 words)Research Paper

...Distributed Databases/Very Large Databases Walmart is a chain of stores and work as an American multinational organization.Walmart manages departmentand warehouse stores in a number of places throughout the world. The company is the biggest public corporation in the world and situates standards for business process. Brief company background and business need for the database Walmart Company was established by Sam Walton in the year of 1962. The company achieved efficiency and high growth in the business world. The company deals with a large number of items and accessories in multiple cities and countries. The management procedure of Walmart in terms of commodities, locations, employees and all other services and benefits they use...
2 Pages(500 words)Assignment

...Databases In designing databases, the initial steps of drawing the entity relationship diagrams play a vital role in ensuring that the database works efficiently. The key components of these diagrams are entities and the relationships that exist among them. It is therefore wise to draw these diagrams before developing the baseball statistics database. Databases To begin with, we must identify the attributes within the baseball statics. Identified attributes are as follows. Players are labeled as pitchers and hitters. The hitter statics include homeruns, batting average, stolen bases, doubles, triples and walks. The pitcher statistics are strikeouts, walks, saves, innings, pitched, earned runs, wins and losses...
2 Pages(500 words)Assignment
sponsored ads
Save Your Time for More Important Things
Let us write or edit the research paper on your topic "Distributed databases" with a personal 20% discount.
GRAB THE BEST PAPER

Let us find you another Research Paper on topic Distributed databases for FREE!