Comments (0)
Add to wishlist Delete from wishlist
Cite this document
Summary
The researcher of the following paper claims that grid computing is a concept that refers to the group of technologies which are used for seamless and scalable access to distributed resources. A grid client deficient in some kind of resource can access the resources of other grid clients…
Download full paper File format: .doc, available for editing
HIDE THIS PAPERGRAB THE BEST PAPER92.6% of users find it useful 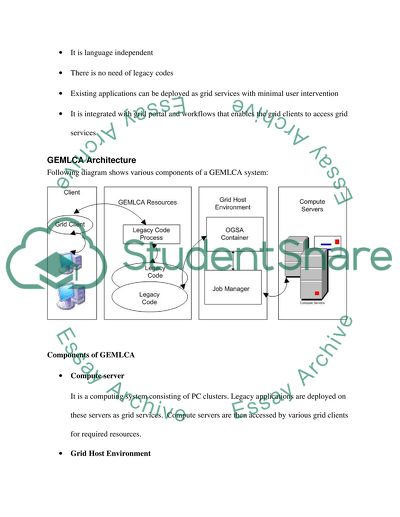 CHECK THESE SAMPLES OF Database Architecture for GEMLCA Resource Availability

...Database Architecture and Administration Evolution of Database Models The aim of this essay is to present an evolutionary history of various Database Models over the four decades of their existence. The essay attempts to list the strengths and weaknesses of each model and discuss the causes that led to their development. While databases have been used since the beginning of electronic computing, the earliest databases were custom made for organizations, difficult to operate and extremely inefficient. These file-based systems needed specific, custom-built programs to access and manage it. Since each file was isolated from others, it often resulted in redundancy and duplication of data. This took up a lot storage space and made the systems...
9 Pages (2250 words) Essay

By giving the responsibility of HR the section/line managers, whose main lot in life is to come in u...

Access to information is a vital part of organizational management processes as it not only promotes efficiency and knowledge-based discharge of duties by the employees but it a great tool for the management to exploit the available information to improve its performance. The information provides wide-ranging knowledge about t...

Administrators make use of group policies to launch principles for desktop predilections and software. For many corporate information technology groups, concurrence with group policies to identify what software should be presented to each category of user, even without human intervention installing it on demand from a corporate server (Silberschatz, Galvin, & Gagine 2002. P. 838). The capability of the AD was introduced in the year 1999, its initial release was with the MS Windows 2000 Server Ed., additionally personalized to spread out functionality, security parameters and build up administration in MS Win Server 2003. The most recent better facilities and efficient edition of the AD are introduced in the Windows Server 2008...
6 Pages (1500 words) Report

American colonial architecture began during colonial rule in the 17th century. The settlers from various European countries arrived there, dwelled there and brought their own technique of architecture with them. Among them were the British, French, Spanish, Portuguese and German. European architecture became dominating in the Americas. As historians Burkholder and Johnson have pointed out, "in a remarkably short time, the conqueror's cathedrals, convents, administrative buildings, and private residences replaced the pyramids, elevated plazas, ball courts, and palaces of the indigenous elites.” (Mark A. Burkholder and Lyman L. Johnson, 2004) Thus the American architecture can be called amalgamative in its characteristic. But...
22 Pages (5500 words) Assignment

The mosque is constructed in a four-iwan style. An iwan is a chamber-like structure. The four iwans face each other and form a rectangle so that the middle of the mosque is a large open-area courtyard. Undivided space encourages human interaction. Within each iwan, there are elaborate decorations to encourage prayer and worship. The decorative style is referred to as hypostyle. Through the centuries different groups have added structural supports, and decorative elements in accordance with the major architectural style of the time. This is true of other elements of the building, and it functions to give the building an entirely unique meaning. For instance, the walls are composed of varying types of brick designs, “some hist...
9 Pages (2250 words) Essay

The Resource-Based View of the firm, however, as Begermann (2006) indicates, pertains to two fundamental constructs other than the strategic management; the building of competencies and the sustainability of capabilities. However, prior to exploring these constructs, there needs to be a more thorough analysis of the RBV’s main points regarding t...

9 Pages (2250 words) Assignment
sponsored ads
Save Your Time for More Important Things
Let us write or edit the research paper on your topic "Database Architecture for GEMLCA Resource Availability" with a personal 20% discount.
GRAB THE BEST PAPER

Let us find you another Research Paper on topic Database Architecture for GEMLCA Resource Availability for FREE!