Comments (0)
Add to wishlistDelete from wishlist
Cite this document
Summary
This paper 'The Manner in Which the Federal Government Usurps Powers That Initially Belonged to the State Governments and the Judiciary" focuses on the fact that the expectations of the founding fathers are unmet in the current government functions and structure of the United States of America. …
Download full paperFile format: .doc, available for editing
HIDE THIS PAPERGRAB THE BEST PAPER94% of users find it useful 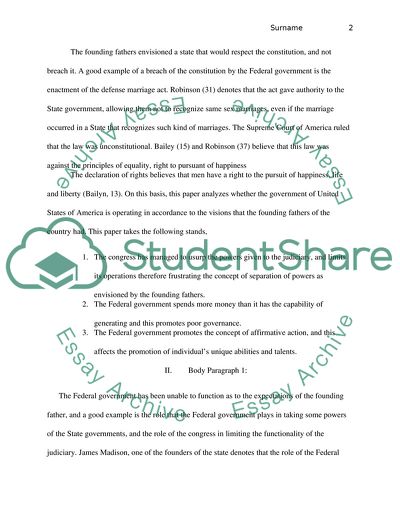 Download file to see previous pages The founding fathers envisioned a state that would respect the constitution, and not breach it. A good example of a breach of the constitution by the Federal government is the enactment of the defence marriage act. Robinson (31) denotes that the act gave authority to the State government, allowing them not to recognize same-sex marriages, even if the marriage occurred in a state that recognizes such kind of marriages. The Supreme Court of America ruled that the law was unconstitutional. Bailey (15) and Robinson (37) believe that this law was against the principles of equality, right to pursuant of happiness

The declaration of rights believes that men have a right to the pursuit of happiness, life and liberty (Bailyn, 13). On this basis, this paper analyzes whether the government of the United States of America is operating in accordance to the visions that the founding fathers of the country had. This paper takes the following stands:

1. The congress has managed to usurp the powers given to the judiciary and limits its operations therefore frustrating the concept of separation of powers as envisioned by the founding fathers.
2. The Federal government spends more money than it has the capability of generating and this promotes poor governance.
3. The Federal government promotes the concept of affirmative action, and this affects the promotion of an individual’s unique abilities and talents.

...?Federal vs. The debate of the power of the federal versus the government has been occurring since the Revolutionary War. It was formed out of the idea that the former British colonies had just won independence from a monarchy, therefore why would they want to put themselves back under one rule. In addition, the colonies were way more autonomous than the states that are composed today in modern day. The debate began with the Federalist and the Anti-federalists. When the first legislature was formed, it was designed so that while the Federal government had power, the states’ still retained some individual autonomy and had representation in the federal government. Even today, that power struggle still continues. The United States...
1 Pages(250 words)Dissertation

... Due Federalism and Powers Since its inception, the division of power in the United s’ federal structure of governance has been one subject of fierce contestations characterizing continuous political battles extending to the court corridors. Having suffered the tyrannical British political and economic policies while under colonialism eventually leading to a revolution for freedom, many greatly distrusted a centralized system of governance. Tasked with drawing up the Articles of confederation in 1781, the Congress literally opted for few powers being assigned to the new central government. As a matter of fact, the original federal government not only had little authority over confederate states and their activities such as commerce...
6 Pages(1500 words)Essay

Roles of State and Federal Governments in employment Regulation

...Running Head: EMPLOYMENT LAWS Employment Laws in California One of the functions of the government or federal) is to regulate employment of persons. Their regulation mechanisms are always geared towards creating a favorable environment for all categories of persons; taking into consideration the diversity of people. The government in this case acts as a mediator as well as an employer. As a mediator, the government acts in a way to protect the interests of both the employer - from manipulative trade unions - and the employee from an exploitative employer. In the state of California, as well as in some other states, the state government protects the employee mostly. The employee is protected from employers whose tendency, as business...
2 Pages(500 words)Essay

...JUDICIAL REVIEW Judicial review refers to the powers that courts of law have to check an executive and legislation act and invali it if it is contrary to constitutional principles. Established in the United States by Article VI, clause 2 of the constitution called the supremacy clause which states that the that the constitution and the laws of the united states which shall be made pursuant thereof shall be the supreme law of the land. It determines whether acts carried out by the executive arm or by congress are valid and they did not violate the constitution. It’s also through the judicial review that separation of powers is checked. In cases where an act of legislation is made by the legislature but it goes against the constitution...
2 Pages(500 words)Essay

The Supreme Court Washington Appeal Court Cases on Contraception Rule in the Affordable Health Care Act The Supreme Courtis currently hearing the cases on contraception that the Obama healthcare program requires employers to finance insurance cover for contraceptives. Two corporations who argued that their businesses are run on religious principles brought the case before the court (Liptak). Hobby Lobby, one of the challengers is a chain stores owned by a religious family. The other challenger is Conestoga Wood Specialties, a company that makes wooden cabinets and is owned by Mennonite family (Liptak).
The court case is represented by Paul D. Clement who argue the case on behalf of the companies and solicitor general, Verrrille...
1 Pages(250 words)Essay

Federal Government The events that led to a change in perception of the Federal Government between 1933 to 1938 cannot be mentioned without reflecting on the happenings of late 1920’s and early 1930’s when the great depression struck various economies of the world. In as much as the effects were not felt across some regions, other notable areas had to endure extremely difficult situations. In the United States, for example, 25% of all workers and 37% of all non-farm workers had lost their jobs by 1933.
Before 1933, people held the perception that the Federal Government with the help of some of its structures was to provide a favorable environment for businesses and the society to prosper (Christie 52). After the great depre...
1 Pages(250 words)Essay

... and non – Aboriginal people in Australia (Aboriginal land rights, 2005) The decision in Mabo and others v. Queensland (No.2) transformed Australian land law. It invalidated the doctrine of terra nullius, which states that the land belongs to nobody. This doctrine had been the fundamental justification for the British troops to initially occupy Australia. The Mabo decision had instated the ownership or title of native into the land law and made it a legal principle of Australian law (Mabo and others v. Queensland (No. 2)). The High Court recognised the rights and interests of the Meriam people, which had devolved upon them by tradition, and ruled that they had a right to their islands in the Torres Strait region. More importantly, the High...
17 Pages(4250 words)Essay

The Genius and Ambiguities of the American Founders

8 Pages(2000 words)Research Proposal
sponsored ads
Save Your Time for More Important Things
Let us write or edit the case study on your topic "The Manner in Which the Federal Government Usurps Powers That Initially Belonged to the State Governments and the Judiciary" with a personal 20% discount.
GRAB THE BEST PAPER

Let us find you another Case Study on topic The Manner in Which the Federal Government Usurps Powers That Initially Belonged to the State Governments and the Judiciary for FREE!