Comments (0)
Add to wishlistDelete from wishlist
Cite this document
Summary
This essay discusses the importance of the Second World War between 1939 and 1945, the military conflict involving the Axis and the Allies. The War is noted to have been the world’s most widespread military conflict historically with the engagement of at least one hundred million military personnel…
Download full paperFile format: .doc, available for editing
HIDE THIS PAPERGRAB THE BEST PAPER96% of users find it useful 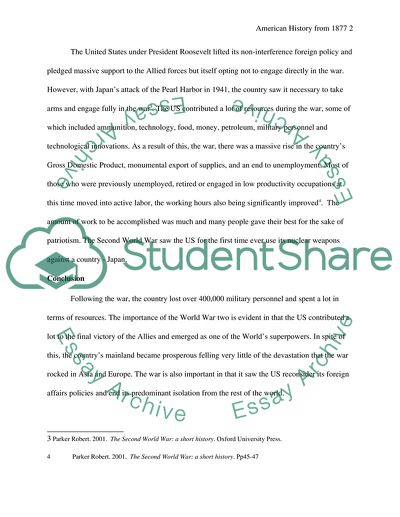 The Second World War Introduction The Second World War occurred between 1939 and 1945, the military conflict involving the Axis and the Allies. The two conflicting parties together comprised the most powerful nations in the world at the time, the United States of America included. The War is noted to have been the world’s most widespread military conflict historically with the engagement of at least one hundred million military personnel1. The effects of World War Two on American history are far reaching, one of the areas most affected being the country’s foreign policy.
The events of the Second World War
In the years immediately preceding the beginning of the Second World War, the United States was focused on solving its internal problems chief of which was the great depression of the 1920s and early 1930s. Beyond its national borders however, democracy was on the decline with countries such as Imperial Japan, Fascist Italy and Nazi Germany either threatening or actually dominating neighboring countries2. France and Britain on the other hand were doing what they could to avert the occurrence of another major war in Europe. During this time, the US had a policy that forbade it from interfering with other countries that engaged in conflicts as outlined it its Neutrality Acts. This policy with time became bothersome as it clashed with the public opposition to the invasion of Poland by Nazi Germany in 1939.
Change in US foreign policy
The United States under President Roosevelt lifted its non-interference foreign policy and pledged massive support to the Allied forces but itself opting not to engage directly in the war. However, with Japan’s attack of the Pearl Harbor in 1941, the country saw it necessary to take arms and engage fully in the war3. The US contributed a lot of resources during the war, some of which included ammunition, technology, food, money, petroleum, military personnel and technological innovations. As a result of this, the war, there was a massive rise in the country’s Gross Domestic Product, monumental export of supplies, and an end to unemployment. Most of those who were previously unemployed, retired or engaged in low productivity occupations at this time moved into active labor, the working hours also being significantly improved4. The amount of work to be accomplished was much and many people gave their best for the sake of patriotism. The Second World War saw the US for the first time ever use its nuclear weapons against a country - Japan.
Conclusion
Following the war, the country lost over 400,000 military personnel and spent a lot in terms of resources. The importance of the World War two is evident in that the US contributed a lot to the final victory of the Allies and emerged as one of the World’s superpowers. In spite of this, the country’s mainland became prosperous felling very little of the devastation that the war rocked in Asia and Europe. The war is also important in that it saw the US reconsider its foreign affairs policies and end its predominant isolation from the rest of the world.
Bibliography
Hart Basil. 1999. History of the Second World War. Da Capo Press.
Parker Robert. 2001. The Second World War: a short history. Oxford University Press.
Science   Read More
Share:
Tags
Cite this document
(“The Second World War Essay Example | Topics and Well Written Essays - 500 words”, n.d.)
The Second World War Essay Example | Topics and Well Written Essays - 500 words. Retrieved from https://studentshare.org/history/1755013-the-topic-of-this-paper-is-to-discuss-what-you-believe-is-important-to-history-american-history-from-1877-and-why

CHECK THESE SAMPLES OF The Second World War

..., and yes, America’s intervention in Europe could possibly be seen as a humanitarian gesture: it was unlikely that Germany ever would have succeeded in invading America, so our national security was probably not at stake. Yet the fact remains that the liberation of Jews and other such interests where not America’s primary concern in entering World War II. Despite the fact that we knew the extermination of Jews was ongoing, we largely stayed aloof from the conflict for some time, only entering reluctantly when attacked by Japan in 1941. Much of our national memory remembers the European front of the Second World War more than the Pacific front – this is where the liberation of concentration camps happened, and where the war’s principle...
3 Pages(750 words)Essay

...countries, lack of power of the League, lack of army, and lack of ability of the League to act quickly. These and many other factors caused the outbreak of the Second World War. Involvement of the US Foundations of the involvement of the US in the Second World War were laid with the invasion of Manchuria, China by Japan. In 1931, China was suffering from depression, which made it all the more easier for the Japanese to establish themselves in the Southern Manchuria. Russia was not content with the Japanese invasion of China, and so was the US since the US had good terms with Russia. In addition to that, the US had many political and...
6 Pages(1500 words)Essay

... Chapter Chosen: Chapter 26: The Second World War Western Civilization Essay As a German general in the SecondWorld War, I experienced many things, most of which were devastating and hard to comprehend. The war broke out in 1939 and at that time I had just been appointed to be a general in the army. In the months and days prior to the war, tension had built up all over the country. As a newly appointed general and having had my father participate in the First World War, I was equally tense and concerned not only about my safety, but that of my squadron as well. When the looming war finally broke, initial orders conveyed to me and other generals expressly instructed us to lead our troops to invade Poland. This was one of the cruellest acts...
3 Pages(750 words)Essay

Causes of the Second World War

..., which would in turn lead to war. Italy, Germany, and Japan were argumentative about Communism which was a cause for war. In Italy, Mussolini aimed to create a Fascist-Roman empire in Africa and the Mediterranean. At the same time, Japan wanted an empire that was Nipponese in China and the Pacific. Countries like USA were isolated and France was reluctant interfere against Germany as France did not rely on the support of America and Britain. The failure of the League of the Nations was another reason that led to World War II. The Second World War was caused due to the reasons listed above. However, the Hitler’s...
1 Pages(250 words)Essay

The World after the Second World War

... experiences of these three great women. Therese Bonney achieved world fame as a photo journalist during the Second World War. She is greatly popular for her work which revealed the havocs of war on an innocent group of people. She initially acquired attention for her revelation of the war between Russia and Finland. Being the only correspondent who was there, she had the whole account to herself and was honored with the White Rose of Finland for her courage. Throughout the Second World War she toured all over western Europe capturing the miseries of the affected children in her photographs which she soon after included in her master work ‘Europe’s Children’. It was her objective to aid in building international ties between European...
2 Pages(500 words)Essay

America and the Second World War

... that Americans would always go to involve themselves in world issues with vested interests e.g. Presence of Oil or other resources that would be of value to the Americans (Piehler, 78). Work Cited Piehler, Kurt. The United States and the Second World War: New Perspectives on Diplomacy. New York: Wiley & Sons, 1998. Print. Burgan, Michael. America in World War II. New York: Cengage Learning, 1992. Print.... ﻿America and the Second World War A The course did not in any way change my view of the Germans. The Germans way of life is one that is structured in so many different aspects of life. They tend to live their lives attaching themselves to various aspects of life...
3 Pages(750 words)Essay

...of and ethnicity as a factor of conflict. This was very apparent in the way Germany and Japan waged their wars. The Germans killed many Jews and people of the Slavic race believing that they were the inferior people and believed they have no place in their realm. The Japanese believed that they were invincible and superior than any other people that they were harsh as conquerors in Asia, and very cruel to Western prisoners. Women played larger roles in society to support the war effort. Most women did tough jobs on factory production. Many women, especially in Russia, directly participated in combat operations as well alongside men. The Second World War...
1 Pages(250 words)Essay

...Women in the Second World War Task: Women in the Second World War Current research has revealed that, the US had attempted from participating in the famous major wars, which resembled the European culture. Significantly, sources have revealed that, the WW II resulted from the GP, which mandated the Americans seize their European investments. In response, such a scenario culminated to rise of power struggle in Europe. Consequently, the withdrawal of the US made tyrants like Hitler to accumulate the control of Europe. However, it is worthwhile noting that, Britain was aware that, for the survival of the Britain she needed to form alliances, especially with the US. While Germany, Italy, and other allies seized majority of Europe, President...
2 Pages(500 words)Case Study

7 Pages(1750 words)Article
sponsored ads
Save Your Time for More Important Things
Let us write or edit the essay on your topic "The Second World War" with a personal 20% discount.
GRAB THE BEST PAPER

Let us find you another Essay on topic The Second World War for FREE!