Comments (0)
Add to wishlistDelete from wishlist
Cite this document
Summary
This discussion shows Lewis and Clark’s attitudes toward Native Americans. Thomas Jefferson was an American Exploration while Meriwether Lewis was his personal assistant. Moreover, Jefferson required an assistance officer who would guard them against the American native…
Download full paperFile format: .doc, available for editing
HIDE THIS PAPERGRAB THE BEST PAPER94.2% of users find it useful 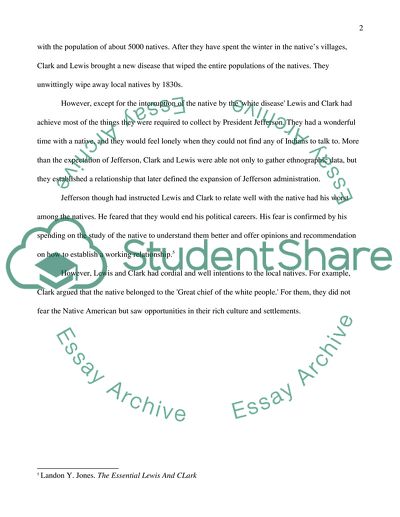 Extract of sample "Lewis and Clarks attitudes toward Native Americans"


Thomas Jefferson was an American Exploration while Meriwether Lewis was his personal assistant. Moreover, Jefferson required an assistance officer who would guard them against the American native. Therefore, for this he had William Clark as his army officer. In 1804, Jefferson sent his colleague on a journal to the American interiors.1 They headed to the northwest from St. Louis following the Missouri river.2 However, Jefferson had more or less different views toward how they would treat the American natives.
Jefferson has his goals that he had instructed all his colleges, but they too had their opinion and sometime did more than they were supposed to accomplish. For Jefferson, he required to maximize their time looking for the natural resources and while learning more about the geographic of the American Interiors. Moreover, Jefferson required that they treat the natives America with kindness and establish a good relationship that would culminate to winning over their trust.3 This was a different tactic from that that the British exploration were using in their quest for American territory.
Jefferson, Lewis and Clark found an established natives in Mandan villages.4 The native had organized businesses and favorable settlement. For them, they required little effort to create rapport with the population of about 5000 natives. After they have spent the winter in the native’s villages, Clark and Lewis brought a new disease that wiped the entire populations of the natives. They unwittingly wipe away local natives by 1830s.
However, except for the interruption of the native by the white disease Lewis and Clark had achieve most of the things they were required to collect by President Jefferson. They had a wonderful time with a native, and they would feel lonely when they could not find any of Indians to talk to. More than the expectation of Jefferson, Clark and Lewis were able not only to gather ethnographic data, but they established a relationship that later defined the expansion of Jefferson administration.
Jefferson though had instructed Lewis and Clark to relate well with the native had his worst among the natives. He feared that they would end his political careers. His fear is confirmed by his spending on the study of the native to understand them better and offer opinions and recommendation on how to establish a working relationship.5
However, Lewis and Clark had cordial and well intentions to the local natives. For example, Clark argued that the native belonged to the Great chief of the white people. For them, they did not fear the Native American but saw opportunities in their rich culture and settlements.
Bibliography
Bakeless, John. 2012. The Adventures of Lewis and Clark. New York: Courier Dover Publications.
Jones, Landon Y. 2000. The Essential Lewis And CLark. New York: Harper Collins Publishers.
U.S History. Exploration: Lewis and Clark. Ushistory.org. Accessed 03 November 2013. http://www.ushistory.org/us/21b.asp. Read More
Share:
Tags
Cite this document
(“Lewis and Clarks attitudes toward Native Americans Essay”, n.d.)
Retrieved from https://studentshare.org/history/1663719-compare-meriwether-lewis-and-william-clarks-attitudes-toward-native-americans-to-those-expressed-by-thomas-jefferson-and-andrew-jackson

“Lewis and Clarks Attitudes Toward Native Americans Essay”, n.d. https://studentshare.org/history/1663719-compare-meriwether-lewis-and-william-clarks-attitudes-toward-native-americans-to-those-expressed-by-thomas-jefferson-and-andrew-jackson.
Comments (0)
Click to create a comment or rate a document

CHECK THESE SAMPLES OF Lewis and Clarks attitudes toward Native Americans

Attitudes of white Americans toward Africans and African : Americans

Attitudes of white Americans toward Africans and African : Americans

...?Topic:  Attitudes of White Americans towards Africans and African – Americans In the book Voice of self, Keith is explaining his life as African American in America and the prejudices he had to face from White Americans during his different stages of life. The author is explaining that the African America during 20 the century had to under go much oppression and suffering from White people of America in regard of linguistic basis. Even when African children got opportunity to get educated the behavior of whites were derogatory toward them as they spoke English with cultural accent. The author argues that the English...
4 Pages(1000 words)Essay

...﻿Cheyenne Native Americans The Cheyenne and other Red Indian tribes were the first occupants of America long before the arrival of white European settlers in the 16th century. Hence, they are referred to as Native Americans. They form a significant plains tribe and belong to the Algonquian Indian family. The Cheyenne comprise of two tribes i.e. the Tsétsêhéstâhese and the Só'taeo'o. Members of the Algonquian family had a common territory (present day Saskatchewan province) and language. However in the mid 16th century, they began their southwestward migration in pursuit of buffaloes and game. However prior to this, the Cheyenne resided alongside the Missouri river in...
3 Pages(750 words)Research Paper

Lewis and Clark from the Native Americans perspective

...? Lewis and Clark from Native Americans Perspective al Affiliation Lewis and Clark from Native Americans Perspective The Lewis &Clark's expedition was commissioned by President Thomas Jefferson in March 1801 in an attempt to explore the then newly acquired Louisiana territory from the French. He chose his secretary Lewis who sought help from his friend Clark to deputize the expedition over the two year journey with his team of Corps of Discovery. According to Lewis and Clark, in their expedition, they found close to fifty Indigenous Tribes (Native Americans) who were hostile and armed. The Native Americans were poorly interpreted and failure to see their unique, cultural and historical existence. This came about because the trail... treaties...
3 Pages(750 words)Research Paper

...similarity that existed between the Indians and Afghans. Further, the Afro-Caribbean group was found to be closest to the Whites when it came to knowledge of the existence of Autism. Attitudes towards Autism (Individualism vs. Collectivism) Modern literature believes that there is a significant difference amongst collectivist and individualist cultures’ perception towards Autism. From the survey point of view, the White and Afro-Caribbean cultures have been designated as the Individualist cultures while Indians and Afghans constitute the collective ethnic groups. Once again, it was assumed that both groups (individualists vs. collectivists) had no significant differences...
20 Pages(5000 words)Essay

...RESEARCH PROPOSAL Research Question Will China’s growing economy reinforce negative American attitudes towards China? ment of Purpose The purpose of this study is to explore the ongoing debate as to whether China’s booming economy is contributing towards negative American attitudes towards China. There is some consensus amongst Americans that China’s significance parallels that of the U.S. The balance of power has gradually shifted as China loans greater resources to the U.S than the U.S does to China, thereby contributing to negative American opinions about China. Contrary to this, however, is the widespread opinion that friendly relationship with China shall work to the benefit of both the states. This study attempts to resolve... this...
1 Pages(250 words)Research Proposal

... of the procedure to choose for or against a certain kind of a person with a particular characteristic. In a scenario where all other options have been exhausted and in vitro genetic screening is the last option, then it is ethically correct to undertake the procedure. But, if the procedure is based on unfounded reasons, discrimination, not wanting and dislike; then undertaking the procedure is ethically wrong because it violates human rights and leads to bias over what could probably have been. Bibliography Brunger, J. W., Murray, G. S., O’Riordan et al., 2000, ‘Parental Attitudes toward Genetic Testing for Pediatric Deafness,’ American of Journal of Human Genetics, 67 (6), pp. 1621 – 1625, NCBI [Online]. Available at: http... without...
8 Pages(2000 words)Essay

...﻿Attitudes toward Economic Globilsation Abstract: The following discussion will seek to engage a broader understanding of the process of globalisation as it exists throughout the world today. Moreover, the analysis will specifically be concentric upon the difficulties and potential opportunities that globalisation has created for firms that operate within the current environment; as well as understanding whether the process is positive or negative Introduction: It is without question that globalisation has changed international business in a litany of different ways over the past several decades. The events of the past several years have provided even further shifts with regards to the overall level of interconnectivity... , pp. 331-344,...
9 Pages(2250 words)Essay
sponsored ads
Save Your Time for More Important Things
Let us write or edit the essay on your topic "Lewis and Clarks attitudes toward Native Americans" with a personal 20% discount.
GRAB THE BEST PAPER

Let us find you another Essay on topic Lewis and Clarks attitudes toward Native Americans for FREE!