Comments (0)
Add to wishlistDelete from wishlist
Cite this document
Summary
Experiences gained by China after defeat in the Sino-Japanese war between 1894 and 1995 and eminent scramble for concessions resulted into several reforms within Qing dynasty. Significant changes included military, political, and educational reforms. The changes remained…
Download full paperFile format: .doc, available for editing
HIDE THIS PAPERGRAB THE BEST PAPER98.2% of users find it useful 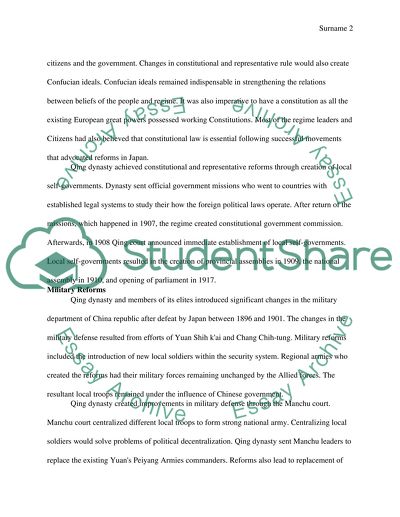 Chinese History: Restoration through Reform Experiences gained by China after defeat in the Sino-Japanese war between 1894and 1995 and eminent scramble for concessions resulted into several reforms within Qing dynasty. Significant changes included military, political, and educational reforms. The changes remained imperative in revolutionizing China’s international relations and economic development.
Educational Reforms
Reforms in the educational sector created by Qing dynasty included changing of traditional academies known as Shu-yuan into modern colleges. Qing dynasty leadership also turned other existing old schools into new schools with better learning materials. Qing also introduced changes in the national system of schools to assist in reorganizing the industry. Qing dynasty education adopted Japanese style of the educational system. The government also imported Japanese teachers and translated Japanese textbooks (Duiker and Spielvogel 623).
Qing dynasty also changed educational curricula by creating mixed curricula consisting of both traditional Chinese classical subjects and modern western subjects. Examination systems also involved the Eight-legged essay rather than the previous model. The government also sent its students in foreign countries for further studies. Returning students sat for state examinations and later recruited in Chinese government sectors. Some of the educational reforms that also included Hundred Days’ reforms failed, and international community described it as “a lapse to barbarism in that country”. Educational reforms aimed at teaching citizens’ patriotism and loyalty. It also promoted social literacy among citizens.
Political Reforms
Experiences from Japan victory between 1904 and 1905 enlightened Qing dynasty leadership of the importance of constitutional and representative changes to help in unifying citizens and the government. Changes in constitutional and representative rule would also create Confucian ideals. Confucian ideals remained indispensable in strengthening the relations between beliefs of the people and regime. It was also imperative to have a constitution as all the existing European great powers possessed working Constitutions. Most of the regime leaders and Citizens had also believed that constitutional law is essential following successful movements that advocated reforms in Japan.
Qing dynasty achieved constitutional and representative reforms through creation of local self-governments. Dynasty sent official government missions who went to countries with established legal systems to study their how the foreign political laws operate. After return of the missions, which happened in 1907, the regime created constitutional government commission. Afterwards, in 1908 Qing court announced immediate establishment of local self-governments. Local self-governments resulted in the creation of provincial assemblies in 1909, the national assembly in 1910, and opening of parliament in 1917.
Military Reforms
Qing dynasty and members of its elites introduced significant changes in the military department of China republic after defeat by Japan between 1896 and 1901. The changes in the military defense resulted from efforts of Yuan Shih­ kai and Chang Chih-tung. Military reforms included the introduction of new local soldiers within the security system. Regional armies who created the reforms had their military forces remaining unchanged by the Allied forces. The resultant local troops remained under the influence of Chinese government.
Qing dynasty created improvements in military defense through the Manchu court. Manchu court centralized different local troops to form strong national army. Centralizing local soldiers would solve problems of political decentralization. Qing dynasty sent Manchu leaders to replace the existing Yuans Peiyang Armies commanders. Reforms also lead to replacement of Yuan himself as a commander-in-chief. The government also sent representatives to provincial armies to implement need changes. In restoring military spirits, Qing dynasty trained Manchu bannermen.
The military reforms aimed at placing China’s armed forces under complete subdue by Manchu. For instance, in 1903, Qing dynasty established a commission for army reorganization in Peking to act as a central agency of recruiting and training new army personnel. Emperor decreed that he was in full command of China’s navy and army. At the end of 1910, the six divisions of Beiyang army created by the new regime remained under the command of Army ministry. New military reforms resulted into vast effects within China defense, which included an increase in respect among military personnel and the outside community.
The aforementioned reforms modernized Qing dynasty and resulted into socio-economic developments. China military and political systems also gained strength after the reforms. Educational reforms also revolutionized scientific and technological research in China. The reforms contributed to the establishment of China with an international community.
Work Cited
Duiker, William, and Jackson, Spielvogel. World History. London: Cengage Learning, 2008. Print. Read More
Share:
Tags
Cite this document
(“Chinese history: restoration through reform Essay”, n.d.)
Chinese history: restoration through reform Essay. Retrieved from https://studentshare.org/history/1659093-chinese-history-restoration-through-reform

CHECK THESE SAMPLES OF Chinese history: restoration through reform

...of Japan. This is because through the attainment of independence from the Western powers, Japan did act as a role model to the entire Asian countries that it is not difficult attaining autonomy from the Western powers28. This is because Japan was able to emerge as one of the most powerful nations in the world attaining the same status as those of the western countries that were considered powerful, and mighty. This can still be observed as Japan is among the world’s G8 one of the world’s most powerful political organization that makes decisions regarding how the world is suppose to conduct its affairs. All these developments are attributed to the reforms brought about by Meiji...
9 Pages(2250 words)Essay

...Chinese History A2 The centralized government created by the Han dynasty was because of a number of reforms that were carried out by the emperors. The development of institutions helped to create stability and order within the vast empire. Moreover, there was a system of training administration officials which was an innovative approach towards ensuring that the affairs of the state could be managed in an efficient and effective manner. The establishment of a bureaucracy helped to ensure the administration process in an effectual manner (Ebrey, 67). Confucianism was adopted as the major system for running the affairs of the state. Confucian system advocated the belief that each...
4 Pages(1000 words)Essay

...for the last few decades. Results indicate a "decrease in inflation pass-through in collaboration with the low inflation since the finish of the 90s" The author then argues for the need of a new monetary framework which should guide the new economic realities such as tremendous economic growth, economic reforms and opening up of the Chinese economy to international investors. Additionally, Zang (2007) suggested that "a simple inflation-targeting framework for the monetary policy, which is suitable for the regime of low inflation and inflation pass-through". The statistics will be of integral importance to the proposed study in as far as statistically understanding...
32 Pages(8000 words)Coursework

...Discuss China's traditional political organization during its long span of dynastic history. China had been conquered several times by alien invaders. Dynasties and governments changed but the Chinese way of life remained the same. The Manchus, for instance, overthrew the Ming Dynasty (last native dynasty of China) and ruled for 267 years. They forced the Chinese to wear queues (pigtails) as a sign of subjugation. This new hair-do changed the appearance of the people but not their mentality or spirit. In fact the Manchu conquerors themselves changed their way of life and became "more Chinese than the Chinese themselves". (Grousset, p. 94) Society in...
5 Pages(1250 words)Essay

...﻿Chinese History # Question 1 In Ten Thousand Things, Ledderose starts with a modular system referred to as the Chinese Script. According to the author, the latter is an early modular system in which fifty thousand characters are generated from a structural repertoire of approximately two hundred units. On the other end of the spectrum, is the Chinese wooden construction. This is a form of traditional Chinese architecture, characterized by beam and post construction. In this mode of architecture, the weight of a building, and particularly the roof, get support from vertical columns made of wood and not from partitioning walls. Chinese wooden construction features one of the fundamental principles characterizing classical Chinese... to...
9 Pages(2250 words)Assignment

...Question I. 2 The Bronze Age represents the time when men learnt to mine and smelt copper and tin to produce bronze.The Chinese Bronze Age started by 1700 B.C during the kingdom of the Shang dynasty. China started producing bronze objects over four thousand years ago in the period of the Lungshan culture and influenced the use of Bronze ceremonial vessels in Chou and Shang dynasties. Bronze ritual vessels were often cast with different types of engraved decoration expressing the aspirations and practices of the Shang people and the life aspects of the Chou people. The bronze ritual vessel was made through sophisticated techniques that were not used in the Middle East and other parts of the world for a...
10 Pages(2500 words)Essay

...Divination: I Ching Inserts His/Her Inserts Inserts Personal reflection The I Ching is one of the oldest divination systems originating from China. For many years, mysticism and divination have been utilized by many people to answer difficult questions, see the future and solve perceived problems. For this exercise, I utilized the divination to answer the question “Will this year bring more good than bad?” I sought a place that had plenty of trees and minimal disruption from people in order to meditate and carry out this exercise. On throwing the 3 coins the required six times, the results are as given below: Coin toss Results from the table: Following (Sui) Changing the Moving Lines into their opposites Results... I Ching Inserts...
1 Pages(250 words)Essay

...The Meiji Restoration The Meiji Restoration, in the history of Japan, is a period that can be well defined as apolitical revolution that saw the downfall of Tokugawa shogunate, therefore restoring the steering of the country to its former imperial rule, led by Emperor Meiji. This period brought about an era major social, political and economic changes in Japan marking the period famously known as the Meiji period (1868-1912). The leaders that spearheaded the restoration were mostly young Samurai who rose from the feudal domains, known to have resisted the Tokugawa authority from time past. These Samurai were motivated by the current state of the country...
2 Pages(500 words)Essay

...Chinese History The significance of semi-colonialism in China China as one of the world’s largest nations with a population of about 475 million people and a territorial size of 10 million square kilometers remained under semi-colonialism till the Second World War. Despite this nation being independent, it still remained an economically dependent state on three main imperialist powers. These imperialist powers were the United States, the United Kingdom, and Japan. The three nations fought amongst themselves and against other capitalist nations for the “right” to exclusively exploit both natural and human resources and convert China into their own colony. Chinese semi-colonialism was...
6 Pages(1500 words)Essay

... Redness and Expertise in the World of Literature The literature of a people is a reflection of its culture, language and worldview. The Chinese culture is one that has a very rich heritage birthed through successive dynasties through many centuries. This rich heritage is displayed in the art and literature of China steeped in age-old tradition and style. Mao Zedong put in place structures and regulation that ensured that the art and literature of China served the people, and not the other way around. The art and literature of China also borrowed from Russian realist styles, which were more in tune with Marxist-Leninist communism’s principles. China in its quest to borrow communism also borrowed and adapted European style art... irrelevant,...
9 Pages(2250 words)Essay
sponsored ads
Save Your Time for More Important Things
Let us write or edit the essay on your topic "Chinese history: restoration through reform" with a personal 20% discount.
GRAB THE BEST PAPER

Let us find you another Essay on topic Chinese history: restoration through reform for FREE!