Chinese history: from the late ming to qianlong - Essay Example 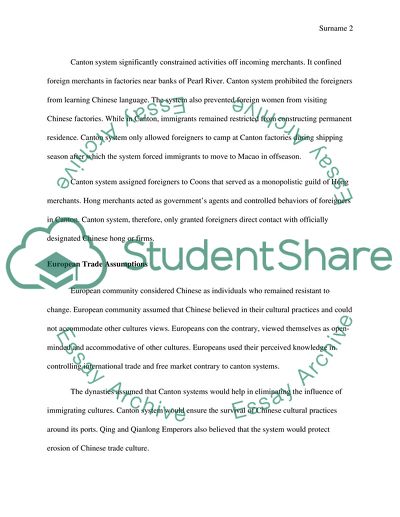 Extract of sample "Chinese history: from the late ming to qianlong"

Chinese History: From the Late Ming to Qianlong Ming and Qianlong governments applied administrative systems or agencies in regulating trade relations and preserving its cultural practices. Government systems employed included Canton and tribute systems. Central government agencies such as Zongli Yamen were imperative in maintaining China’s diplomatic relations.
Dynasty Systems and Assumptions
Canton System
The governments used Canton system for limiting international and regional trade using Hong merchants as agencies. Emperor ruled over canton system strategies that remained applicable between 1760 and 1770. Canton system only allowed use of silver a form of currency when trading on Chinese tea. Canton system remained restrictive in its design and always confined foreigners to smaller commercial districts in Canton. Canton system prohibited direct contact between Chinese citizens and foreigners. Canton system functioned between 1622 and 1911 after initiation by Qing dynasty (McCannon 223). Qing dynasty established the system at Canton port to assist in dealing with foreigners who arrived in China for trade. Ming courts made initial contacts with Portuguese, as the first Europeans to arrive in China by sea for trade at Canton between 1514 and 1517. Ming court expelled the foreigners and broke off relations. Ming dynasty accused Portuguese of crimes such as thievery and cannibalism.
Canton system significantly constrained activities off incoming merchants. It confined foreign merchants in factories near banks of Pearl River. Canton system prohibited the foreigners from learning Chinese language. The system also prevented foreign women from visiting Chinese factories. While in Canton, immigrants remained restricted from constructing permanent residence. Canton system only allowed foreigners to camp at Canton factories during shipping season after which the system forced immigrants to move to Macao in offseason.
Canton system assigned foreigners to Coons that served as a monopolistic guild of Hong merchants. Hong merchants acted as government’s agents and controlled behaviors of foreigners in Canton. Canton system, therefore, only granted foreigners direct contact with officially designated Chinese hong or firms.
European Trade Assumptions
European community considered Chinese as individuals who remained resistant to change. European community assumed that Chinese believed in their cultural practices and could not accommodate other cultures views. Europeans con the contrary, viewed themselves as open-minded and accommodative of other cultures. Europeans used their perceived knowledge in controlling international trade and free market contrary to canton systems.
The dynasties assumed that Canton systems would help in eliminating the influence of immigrating cultures. Canton system would ensure the survival of Chinese cultural practices around its ports. Qing and Qianlong Emperors also believed that the system would protect erosion of Chinese trade culture.
Tribute System
Chinese dynasties used the traditional tribute system as a basis of transacting trade with foreigners. Tribute system restricted access of foreign traders to Chinese markets by limiting the latter to specified ports subdued by the government. Chinese dynasties applied tribute system as an efficient mechanism for exacting compliance with neighboring states and individuals. The compliance had its basis on important issues such as diplomatic, economic, and political concerns. According to tribute system, foreigners would receive permission to establish contact with China and trade only after showing subservience to Chinese emperor. Subservience to Chinese Emperor required foreigners to bear tribute to the Emperor. In paying tribute, foreigners would present to the emperor token offerings consisting of rare precious products or native products. The foreigners would also perform ritual obeisance, which involved nine time’s procrastinations and three times kneeling. Emperors of Chinese dynasties assumed that by administering the tribute system, cultural practices such as respect to its leaders would remain protected.
Central Government Agencies and Assumptions
Central government agencies of Qing and partly Qianlong dynasties consisted of six notable ministries such as Board of Civil appointments, finance, rites, war, punishments, and works. Lifan Yuan and board of rites agencies formed the central institutions of human relations.
Lifan Yuan agency that also existed in Qing government had the role of supervising Mongolian dependencies. Lifan Yuan also supervised appointments of Ambans in Tibet. The agency also known as Court of territorial affairs also oversaw Qing Empire’s relationship with Russia.
Board of Rites agency had responsibilities for matters concerning court protocols. Board of rites organized periods of ancestral and other gods worship. The agency also managed nationwide civil examination systems and managed relations with tributary nations.
Office of Board Affairs
Border affairs office designed strategies of dealing with pertinent threats to the dynasty from either Russia or Mongols. The agency also laid down strategies for trading with west or central Asia. Office of the board of affairs also remained relevant monitoring intermarriages and formulating alliances with western Muslims and Mongols.
Imperial household
Another notable agency was the imperial family. The agency had its advisors chosen from royal families. Imperial household advices remained imperative in providing information relating to suitability-modernizing China’s economy or integrating European technology. Royal family company also maintained prestige within the dynasty.
Zongli Yamen agency
Yamen agency also known as premier’s office remained a significant foreign intervention of Qing dynasty. Qing dynasty established the organization as a replacement of Lifan Yuan to help deal with foreign affairs mainly from the west. The dynasties believed that the central agencies would revolutionize its diplomatic relations with foreign countries. Qing dynasty also assumed that formation of Zong Yamen agency would relieve diplomatic pressures from western countries. Moreover, the companies would promote intercultural communication between China and the international community.
Dynasties systems in both Qing and Qianlong reigns remained imperative in the maintenance of Chinese cultural heritage. Canton systems helped in protecting China trade policies and Canton port from external influence. Tribute systems assisted Qing and Qianlong governments in preserving Chinese cultural practices such as paying tribute to Emperors.
Work Cited
McCannon, John. Barron’s AP World History. Hauppauge, N.Y.: Barrons Educational Series, 2014. Print. Read More
Share:
Tags
Cite this document
(“Chinese history: from the late ming to qianlong Essay”, n.d.)
Chinese history: from the late ming to qianlong Essay. Retrieved from https://studentshare.org/history/1658828-chinese-history-from-the-late-ming-to-qianlong

“Chinese History: From the Late Ming to Qianlong Essay”, n.d. https://studentshare.org/history/1658828-chinese-history-from-the-late-ming-to-qianlong.
Comments (0)
Click to create a comment or rate a document

CHECK THESE SAMPLES OF Chinese history: from the late ming to qianlong

...Chinese History A2 The centralized government created by the Han dynasty was because of a number of reforms that were carried out by the emperors. The development of institutions helped to create stability and order within the vast empire. Moreover, there was a system of training administration officials which was an innovative approach towards ensuring that the affairs of the state could be managed in an efficient and effective manner. The establishment of a bureaucracy helped to ensure the administration process in an effectual manner (Ebrey, 67). Confucianism was adopted as the major system for running the affairs of the state. Confucian system advocated the belief that each individual must obey the...
4 Pages(1000 words)Essay

...This is a story which was written during the sixteenth century by the renowned Chinese vernacular Feng Meng-long. This story is taken from Feng's collection: "Common Words to Warn the World". The story basically revolves around two prominent characters, a courtesan or prostitute named Mei Du and a young and privileged man named Jia Li. He was the third son of the Provincial Commissioner; he was enrolled as an academic scholar in the Academy of the Northern capital. Instead of concentrating in his studies he indulged himself in the pleasures of the courtesan and became highly spendthrift. They both fell in love and the lady who owned Du set the criteria that she could be released in exchange of some money. Eventually they...
8 Pages(2000 words)Book Report/Review

...architecture and art with opulence vocabulary, and not restraint or austerity terms. The Buddhist monks played an important the history of material culture in China. This is because of the fact that they were always ready to lament over the degeneracy of the monastic order in China. In ancient India, the monks were also materialistic because many of the objects discussed were brought by the monks. However, as indicated, monks are only supposed to seek for the truth and not material goods. # Question 3 The Ming era lasted from 1368 to 1644, and it was indeed developing time for the Chinese civilization. The Literature s well as painting thrived in this period and was able to...
9 Pages(2250 words)Assignment

...culture in a way that the Chinese abandoned their material culture for Buddhist thinking and teaching which altered the class system that existed. The importance of Buddhist Monks in the history of China is that they influenced the Chinese to abandon material culture and focus on spiritual quest and most importantly the truth. Question III. 2. Writings about luxury goods in Ming China revealed a lot about Ming ideas about things and about the past. There is much evidence that suggests that during the Ming dynasty in China, the enjoyment of the fruits of commerce was a permitted behavior. During this time, people were buried with...
10 Pages(2500 words)Essay

...Divination: I Ching Inserts His/Her Inserts Inserts Personal reflection The I Ching is one of the oldest divination systems originating from China. For many years, mysticism and divination have been utilized by many people to answer difficult questions, see the future and solve perceived problems. For this exercise, I utilized the divination to answer the question “Will this year bring more good than bad?” I sought a place that had plenty of trees and minimal disruption from people in order to meditate and carry out this exercise. On throwing the 3 coins the required six times, the results are as given below: Coin toss Results from the table: Following (Sui) Changing the Moving Lines into their opposites Results... I Ching Inserts...
1 Pages(250 words)Essay

...Chinese History The significance of semi-colonialism in China China as one of the world’s largest nations with a population of about 475 million people and a territorial size of 10 million square kilometers remained under semi-colonialism till the Second World War. Despite this nation being independent, it still remained an economically dependent state on three main imperialist powers. These imperialist powers were the United States, the United Kingdom, and Japan. The three nations fought amongst themselves and against other capitalist nations for the “right” to exclusively exploit both natural and human resources and convert China into their own colony. Chinese semi-colonialism was...
6 Pages(1500 words)Essay

...irrelevant, which resulted in their humiliation and dishonor. Some were prosecuted accordingly, as the people regarded them as traitors. The dichotomy in thought in China is evident in the way the country portrays itself to the outside world. The Chinese Revolution is part of the history of China and, as with every historical event has differing and conflicting accounts of its impact on Chinese life. Those who sought to establish communist socialism sought to change the politics of China and its culture. Contrastingly, those who wanted to maintain the status quo were regarded as elitists concerned about themselves at the expense of the masses. Chinese art and literature...
9 Pages(2250 words)Essay
sponsored ads
Save Your Time for More Important Things
Let us write or edit the essay on your topic "Chinese history: from the late ming to qianlong" with a personal 20% discount.
GRAB THE BEST PAPER

Let us find you another Essay on topic Chinese history: from the late ming to qianlong for FREE!