Comments (0)
Add to wishlistDelete from wishlist
Cite this document
Summary
In terms of governance, the change that was experienced within Korea actually took place as a prelude to the collapse of the Soviet Union and the end of the Cold War. However, nevertheless, with the Gorbachev thaw and a recognition of the fact that the threats of past years…
Download full paperFile format: .doc, available for editing
HIDE THIS PAPERGRAB THE BEST PAPER91.7% of users find it useful 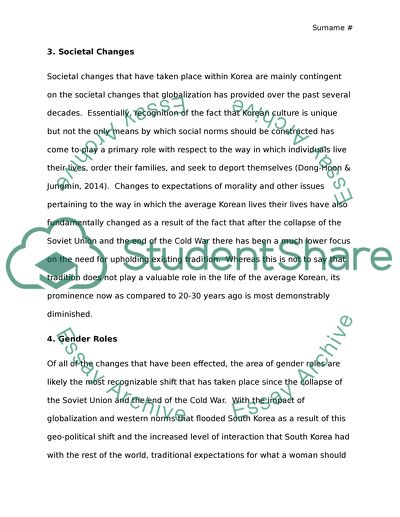 Extract of sample "Korea impacted by cold war, changes of the country 1991-2014"

Section/# Korean Dynamics in the Post Cold War Era Government In terms of governance, the change that wasexperienced within Korea actually took place as a prelude to the collapse of the Soviet Union and the end of the Cold War. However, nevertheless, with the Gorbachev thaw and a recognition of the fact that the threats of past years were not as dire as they had once been, democracy advocates in South Korea began to demand a more democratic and transparent government (Dal Yong, 2014). As a result of this, uprisings in 1987 paved the way to dispose of military leadership that had ruled the nation with an iron grip ever since the conclusion of the Korean War.
2. Economy
In terms of economics, the greatest change was that South Korea came to integrate with the global economy to a more full and complete degree. As a result of the continual threat of invasion and the protective shield the United States provided, South Korean markets were almost entirely restricted to US export. Although this was not based on extant treaty obligations, it is clear and apparent that the United States sought to defray the massive cost of having a military presence in South Korea by essentially creating a captive market for American products and a captive market for most exports (Ginsberg, 2014).
3. Societal Changes
Societal changes that have taken place within Korea are mainly contingent on the societal changes that globalization has provided over the past several decades. Essentially, recognition of the fact that Korean culture is unique but not the only means by which social norms should be constructed has come to play a primary role with respect to the way in which individuals live their lives, order their families, and seek to deport themselves (Dong-Hoon & Jungmin, 2014). Changes to expectations of morality and other issues pertaining to the way in which the average Korean lives their lives have also fundamentally changed as a result of the fact that after the collapse of the Soviet Union and the end of the Cold War there has been a much lower focus on the need for upholding existing tradition. Whereas this is not to say that tradition does not play a valuable role in the life of the average Korean, its prominence now as compared to 20-30 years ago is most demonstrably diminished.
4. Gender Roles
Of all of the changes that have been effected, the area of gender roles are likely the most recognizable shift that has taken place since the collapse of the Soviet Union and the end of the Cold War. With the impact of globalization and western norms that flooded South Korea as a result of this geo-political shift and the increased level of interaction that South Korea had with the rest of the world, traditional expectations for what a woman should espouse and what her place in society should be were shifted from what they had been for many decades previously (Kim, 2009). Whereas it might have been expected for a wife to stay home and be a homemaker during the Cold War era, it is now almost expected and demanded that women will take an active part in the workforce and attain higher levels of education; in an almost identical way to their male counterparts.
References
Dal Yong, J. (2014). The Power of the Nation-state amid Net-liberal Reform: Shifting Cultural Politics in the New Korean Wave. Pacific Affairs, 87(1), 71-92. doi:10.5509/201487171
Dong-Hoon, S., & Jungmin, S. (2014). Dynamics of Ethnic Nationalism and Hierarchical Nationhood: Korean Nation and Its Othernesss since the Late 1980s. Korea Journal, 54(2), 5-33.
Grinberg, N. (2014). From Miracle to Crisis and Back: The Political Economy of South Korean Long-Term Development. Journal Of Contemporary Asia, 44(4), 711-734. doi:10.1080/00472336.2014.883421
Kim, H. (2009). Should feminism transcend nationalism? A defense of feminist nationalism in South Korea. Womens Studies International Forum, 32(2), 108-119. doi:10.1016/j.wsif.2009.03.002 Read More
Share:
Tags
Cite this document
(“Korea impacted by cold war, changes of the country 1991-2014 Assignment”, n.d.)
Korea impacted by cold war, changes of the country 1991-2014 Assignment. Retrieved from https://studentshare.org/history/1657460-korea-impacted-by-cold-war-changes-of-the-country-1991-2014

CHECK THESE SAMPLES OF Korea impacted by cold war, changes of the country 1991-2014

...? Cold War Larry Barras Historical Contexts & Literature Lib 316 Prof. Stiene 16 May Cold War According to diplomatic terminologies, there are three basic types of wars. They include the hot war, warm war and the cold war. The cold war is the term used to illustrate the association between the Soviet Union and America (1945-1991). In essence, the war can be described as the persistent state of military and political tension between the two states. The Soviet Union and its associates were branded as the Eastern bloc while...
6 Pages(1500 words)Essay

...Cold War Several aspects of the American society had been impacted by the ‘Cold War’ for most part of the second half of the 20th century. As the ‘Cold War’ emerged out of the opposing values fought mostly through propaganda and secret tactics, the global battle for supremacy shifts the balance of power between the United States and democratic countries on one hand, and the Soviet Union and the allied communist nations on the other. This event provided stimulus for continuously sustaining and expanding the U.S. military capability after the end of WWII and to a higher end, remedied the ‘great depression’...
2 Pages(500 words)Essay

Korea in the Cold War

...Unit V Exam # 2 In June 1950, Korea experienced a new and more disturbing phase of the Cold War. Following the collapse of Japan in 1945, Soviet troops had acknowledged the Japanese capitulation on the Korean Peninsula, north of the thirty-eighth parallel, and the U.S. troops had done the same south of that line. Both superpowers admitted their desire of reunification of Korea, but as in Germany, each nation facilitated the formation of rival regimes below and above the parallel. When the Americans and the Soviet Union withdrew their forces, by 1949, the entire Peninsula was a bristling armed camp, with two antagonistic regimes eyeing each other in suspicion (Kennedy et...
8 Pages(2000 words)Essay

...? Cold War Matt Barras Historical Contexts & Literature Lib 316 Prof. Stiene 27 May Cold War According to diplomatic terminologies, there are three basic types of wars. They include the hot war, warm war and the cold war. The cold war is a term used to illustrate the relation between the Soviet Union and America (1945-1991). The war can be described as the persistent military state and political tension amongst the two states (Leffler, 2008). The Soviet Union and its associates branded the Eastern bloc while the United...
8 Pages(2000 words)Essay

...in place to never give ground throughout the Cold War, meaning that there were frequent proxy conflicts throughout the world in order for either country gain an ideological advantage. These included proxy conflicts in Afghanistan, Vietnam, Korea as the best known examples. The United States also engaged in huge industrial efforts, to force the Soviet Union to match them – things like the Space Program and the Interstate highway system. These proxy conflicts, however, also caused many problems for the United States. Arming the Mujahedeen in Afghanistan, for instance, led to those same arms later being used against America, while the proxy conflicts in Vietnam...
3 Pages(750 words)Essay

...A Critical Evaluation of the US Policy For the Cold War from 1946-1965 After the fall of Germany, for President Harry Truman, the Soviet leaders’ reluctance to retreat from the wartime frontline in Europe and the Middle East was essentially a clear sign of the Communist Imperialism which could severely hamper the United States’ interests in the oil-rich countries in the Middle East and European. After the Potsdam Conference and the uprising in Greece, several factors were clear that the Soviet leaders were not going to give up their control over the Eastern Europe and the Middle East. This perception of Truman’s Administration about the communist Russia’s expansionist intention played a...
5 Pages(1250 words)Essay

...History and Literature Through scholarly research, history and literature are inseparable. Literature portrays itself as a necessity in history especially during the cold world war. It was a period of conflict short of full-scale war, which was natured by mutual perceptions of hostile intentions of democracy and capitalism against communism and command economy between the U.S and the Soviet Union (Smith 18). This was due to greed for leadership. It is clear that subsequent wars known as the ‘proxy ‘ always broke out between two military-political alliances. The activities of the “The cold war (1945 - 1991)” prove the...
2 Pages(500 words)Essay

...of American soldiers were killed in this war and America was forced to withdraw from Vietnam without achieving any of the goals it had set out to achieve. However, not all turned out badly for the United States because it managed, along with its allies, to form a defense pact (NATO) which came to ensure its security as well as its influence. The Cold War displayed the economic strength of the United States because it not only managed to outlive the Soviet Union, its economic system came to be adopted by almost all the countries in the world, in one form or another (Rosenberg). After the Cold War, the United States remained the sole...
2 Pages(500 words)Essay

...Subject: History and Political Science, Essay Date: Topic: Cold War 1989-1991 under Bushs Administration Introduction Intervention is the consequential action of the decision making process. That was beset with many conflicting problems with Bush Administration. Earth-shaking events in some part of the world, does not mean that America has to intervene, when its interests are not at stake. The period 1989-1991 was the crucial one for Russia, and for the ideology of Communism in particular, when the churning process was going on. The Bush Administration...
2 Pages(500 words)Essay

...Cold War was a unique phenomenon of post WW2 international relations when the two nations, especially the two superpowers: USA; and USSR had developed hostile relations defined by sharp conflicts within political diplomacy and Economic areas. According to Murrin et al. (2011) cold war was not only confined to international relations but it had encompassed myriad aspects of domestic and international conditions which had huge impact on the people at large. He affirms that in international relations, Cold War affects social conditions at the national and local level and may also remain in background and serve as catalyst...
1 Pages(250 words)Essay
sponsored ads
Save Your Time for More Important Things
Let us write or edit the assignment on your topic "Korea impacted by cold war, changes of the country 1991-2014" with a personal 20% discount.
GRAB THE BEST PAPER

Let us find you another Assignment on topic Korea impacted by cold war, changes of the country 1991-2014 for FREE!