Comments (0)
Add to wishlistDelete from wishlist
Cite this document
Summary
A writer of the paper "Napoleon Bonaparte as French Leader" reports that Napoleon rose to power due to his military exploits to become the first emperor of France. After his return to the French army, Napoleon was keen to show his commitment to the French people. …
Download full paperFile format: .doc, available for editing
HIDE THIS PAPERGRAB THE BEST PAPER98.3% of users find it useful 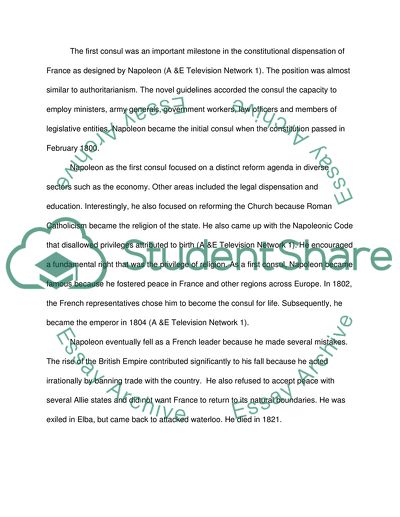 ﻿Napoleon Bonaparte as French Leader
Napoleon Bonaparte is recognized as a French leader due to his numerous military exploits. He was born in 1769 in Corsica (BBC 1). He traces his heritage to France and Italy. He attended a military school in France and later joined the army as an artilleryman. His father died, making him change his residence to Corsica where he joined the anti-France opposition. However, he disagreed with the leader of the resistance and changed his loyalty to France. In as much as Napoleon’s era can be examined based on diverse perspectives, it is necessary to focus on major issues that include his rise to power, first consul, reform agenda and fall.
Napoleon rose to power due to his military exploits to become the first emperor of France. After his return to the French army, Napoleon was keen to show his commitment to the French people. Consequently, he joined the Jacobins and supported their numerous ideals. After three years of revolution, the country became a republic. Subsequent to the deceleration of France as a republic, Maximilien de Robespierre rose to power (Fremont-Barnes 7). The years between 1793 and 1794 was characterized with terror because many people died. The chaos created a suitable ground for military leaders like Bonaparte to thrive (Fremont-Barnes 7). In 1795, Napoleon became “commander of the Army of the Interior” because he blotched an attempt for revolution (Chandler 40). His profile in the country was enhanced when he married Joséphine de Beauharnais. However, in 1810, he applied for annulment because she could not give him a son (A &E Television Network 1).
The first consul was an important milestone in the constitutional dispensation of France as designed by Napoleon (A &E Television Network 1). The position was almost similar to authoritarianism. The novel guidelines accorded the consul the capacity to employ ministers, army generals, government workers, law officers and members of legislative entities. Napoleon became the initial consul when the constitution passed in February 1800.
Napoleon as the first consul focused on a distinct reform agenda in diverse sectors such as the economy. Other areas included the legal dispensation and education. Interestingly, he also focused on reforming the Church because Roman Catholicism became the religion of the state. He also came up with the Napoleonic Code that disallowed privileges attributed to birth (A &E Television Network 1). He encouraged a fundamental right that was the privilege of religion. As a first consul, Napoleon became famous because he fostered peace in France and other regions across Europe. In 1802, the French representatives chose him to become the consul for life. Subsequently, he became the emperor in 1804 (A &E Television Network 1).
Napoleon eventually fell as a French leader because he made several mistakes. The rise of the British Empire contributed significantly to his fall because he acted irrationally by banning trade with the country. He also refused to accept peace with several Allie states and did not want France to return to its natural boundaries. He was exiled in Elba, but came back to attacked waterloo. He died in 1821.
Works Cited
A &E Television Network. Napoleon Biography. 2014. Web. 31st July 2014
http://www.biography.com/people/napoleon-9420291#related-video-gallery
BBC. Napoleon Bonaparte (1769 - 1821). 2014. Web. 31st July 2014
Chandler, David. The Campaigns of Napoleon. New York, NY: Simon and Schuster,
2009. Print
Top of Form
Fremont-Barnes, Gregory. Napoleon Bonaparte: Leadership, Strategy, Conflict. Oxford:
Osprey Pub, 2010. Print.
Bottom of Form Read More
Share:
Tags
Cite this document
(“Napoleon Bonaparte as French Leader Admission/Application Essay”, n.d.)
Retrieved from https://studentshare.org/history/1653954-western-civilization-examine-napoleon-bonaparte-as-french-leader

CHECK THESE SAMPLES OF Napoleon Bonaparte as French Leader

..., but, paradoxically, it was Napoleon Bonaparte who enabled and extended many of these ideas throughout Europe. The daring contributions of Napoleon in war are an outstanding figure of his brave and resourceful nature. Napoleon was, no doubt, a hero for the French people, because of his military intellect. There never was or never will be such a great military commander for the French army as that of the likes of Napoleon Bonaparte. Napoleon won many wars and conquered many countries as a result of his remarkable military skills. France never had a leader before that won...
4 Pages(1000 words)Research Paper

Napoleon Bonaparte as a Political Leader

...including guillotine made people fear, being a new style of execution, and becoming the nerve of revolutionary justice. (Censer & Hunt, 2001) Thus, the French revolution was premised on enlightenment, citizenship, nationalism and inalienable rights, some of which would spill over to the American Revolution. Napoleonic Era Napoleon Bonaparte was born on August 15, 1769 in the town of Ajaccio, Corsica; the Republic of Genoa which was transferred one year after the small island to France. On July 4, 1176, the American constitution and declaration of independence was signed in Philadelphia, Pennsylvania, then years following to July14, 1789 saw the final fall of Bastille,...
3 Pages(750 words)Essay

...?Napoleon Bonaparte bibliography Napoleon Bonaparte was an emperor of France and a reputable military general. His achievements resonate up to the current times. Much of Europe bears great recognition for this outstanding emperor and military leader of France. His reputation during his time was impeccable and he hoisted the sovereignty and pride of France very high. Napoleon Bonaparte birth date is 15th august 1769. He was born in the French town of Corsica. His family was gently. He grew up normally until the age of 10 when he departed from his birth town of Corsica (Johnstone 11). He was enrolled in a...
7 Pages(1750 words)Essay

...of the Great Powers broke down during the Congress of Vienna and the French people became dissatisfied with the restored royalists, Napoleon made plans to return to power. Sailing from Elba on February 26, 1815, with 1,050 soldiers, Napoleon landed in southern France and marched unopposed to Paris, where he reinstated himself on March 21." (Biographical Sketch: Napoleon Bonaparte). Considering the great support that Napoleon attained from the French people upon his return from the exile to Elba, it is essential to give maximum attention to the common interest of the people of France and to keep Bonaparte...
2 Pages(500 words)Essay

Napoleon Bonaparte The Man behind the Soldier

.... The achievements of Napoleon were far reaching in that they were not limited to France but to other European countries as well. These achievements of Napoleon did not go unnoticed by the French People. On the other side of the spectrum, there are people who believed that Napoleon was too harsh, heartless, very rigid, and greedy which led to his eventual downfall. Up to this day, Napoleon Bonaparte, his conquests, and his personal life are still alive in society through books including his biography which are studied in schools, through discussions and forums in schools, and through analysis of the courses of events in his life. ...
10 Pages(2500 words)Essay

...﻿ French Revolution and NapoleonNapoleon’s claim that he saved the French revolution does not seem to hold due to the many changes he brought to the ideals of the French revolution. Of course he continued some of the policies which were in the spirit of the revolution but these policies were connected with education and civil codes rather than a proper system of government. In fact, it can be shown that the system of government established by Napoleon was a step back towards absolutism rather than a more democratic system. Undoubtedly, Napoleon took over the government of France as a popular ruler but he was also a...
2 Pages(500 words)Essay

...An Official Painter and an Official Tribute to a Great General: An Analysis of Andrea Appiani’s Napoleon Bonaparte NAPOLEON BONAPARTE, c 1798, By Andrea Appiani (ITALY, 1754-1817)  Introduction Until recently, the portrait of Napoleon Bonaparte by Andrea Appiani was believed to be lost and celebrated merely through carvings. It was almost definitely created soon after the great commander conquered the Austrian military at Marengo and declared Milan as Cisalpine Republic’s capital (Boime 1993). It is quite similar to the visual rendering of Napoleon as First Consul. Similar to the Melzi work of art,...
10 Pages(2500 words)Term Paper

...undeniably deserves to be rated among the most celebrated leaders in the history of the West and among those that changed the course of the history of the world. Whether the change was for the better or for the worse depends on which side of Napoleon we lay the focus. As he himself admitted, he lived only for posterity (Perry et al. 484). And he did. Works Cited Landau, Elaine. Biography: Napoleon Bonaparte. Minneapolis: Twenty-First Century Books, 2006. Lyons, Martyn. Napoleon Bonaparte and the Legacy of the French Revolution. New York: St. Martin’s Press, Inc., 1994. Perry, Marvin B, Myrna Chase, Margaret C Jacob,...
6 Pages(1500 words)Research Paper

The Decline of Napoleon Bonaparte

...The Decline of Napoleon Bonaparte Your The Decline and Downfall of Napoleon Bonaparte 1. Introduction Napoleon Bonaparte was born to a Corsican minor family in 1769. At the same time, Corsica was annexed by France, thus making Bonaparte French. He was educated at French military schools in 1784, and attended the Ecole Militaire of Paris, the royal school of military. He graduated with honors and joined the Royal French Army in 1785. Despite being a member of Corsican aristocracy, he didn’t have influence in France. He had to join artillery as officer since it was the...
18 Pages(4500 words)Research Paper
sponsored ads
Save Your Time for More Important Things
Let us write or edit the admission/application essay on your topic "Napoleon Bonaparte as French Leader" with a personal 20% discount.
GRAB THE BEST PAPER

Let us find you another Admission/Application Essay on topic Napoleon Bonaparte as French Leader for FREE!