Comments (0)
Add to wishlistDelete from wishlist
Cite this document
Summary
For that reason, the establishment of Zionism aims at returning Jews to their homeland. As an organized movement, it is developed in 1897 by Theodor Herzl…
Download full paperFile format: .doc, available for editing
HIDE THIS PAPERGRAB THE BEST PAPER95.2% of users find it useful 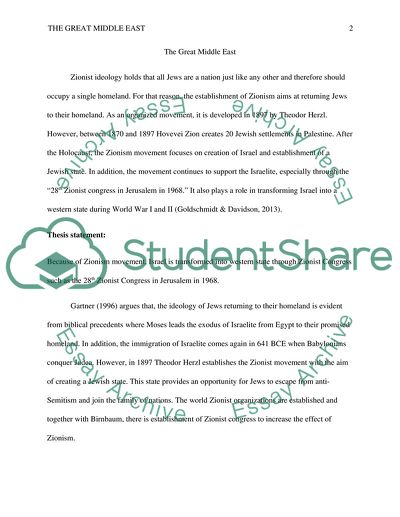 The Great Middle East The Great Middle East Zionist ideology holds that all Jews are a nation just like any other and therefore should occupy a single homeland. For that reason, the establishment of Zionism aims at returning Jews to their homeland. As an organized movement, it is developed in 1897 by Theodor Herzl. However, between 1870 and 1897 Hovevei Zion creates 20 Jewish settlements in Palestine. After the Holocaust, the Zionism movement focuses on creation of Israel and establishment of a Jewish state. In addition, the movement continues to support the Israelite, especially through the “28th Zionist congress in Jerusalem in 1968.” It also plays a role in transforming Israel into a western state during World War I and II (Goldschmidt & Davidson, 2013).
Thesis statement:
Because of Zionism movement, Israel is transformed into western state through Zionist Congress such as the 28th Zionist Congress in Jerusalem in 1968.
Gartner (1996) argues that, the ideology of Jews returning to their homeland is evident from biblical precedents where Moses leads the exodus of Israelite from Egypt to their promised homeland. In addition, the immigration of Israelite comes again in 641 BCE when Babylonians conquer Judea. However, in 1897 Theodor Herzl establishes the Zionist movement with the aim of creating a Jewish state. This state provides an opportunity for Jews to escape from anti-Semitism and join the family of nations. The world Zionist organizations are established and together with Birnbaum, there is establishment of Zionist congress to increase the effect of Zionism.
Gottheil (1899) argues that, the 28th Zionist Congress of 1968 in Jerusalem adopts 5 principles as aims of the contemporary Zionism. These principles include: protecting the Jewish rights everywhere; returning the Jewish people into historic homeland; preserving the Jewish identity through fostering Hebrew, Jewish and Zionist education; strengthening the state of Israel; and centralizing and unifying the Jewish people.
According to Goldschmidt & Davidson (2013), after Herzl’s death Zionism separates with Orthodox Judaism and shifts to Communism. This is as a result of cultural and language diversity which makes orthodox religious organizations opposes the Zionism. In addition, this opposition is influenced by Zionism’s secularism and the fact that Jewish rule will only be re-established in Israel by Messiah. However, after the Jewish separates with the Judaism they immigrate to Palestine to form a communism. The Jewish citizens are led by Zionist leader Jabotinsky and form a new revival for the Hebrew language. The Jewish organizations and migrants begin making vast land purchases. For instance, they purchase malarial swamps and drain them to create fertile lands. However, a socialist commune acquires some land around the Sea of Galille and establishes the first Kibbutz In 1911.
In 1914, The Zionist Movement enters into the period of World War I. However, since the secular Louis Brandeis, often referred to as “people’s lawyers” has been involved in Zionism in 1912, the movement gains a significant support. During the 1917, “the American Provisional Executive Committee for General Zionist Affairs” chaired by Brandeis had increased the membership of American Zionist by 200,000. As a result, it becomes the financial supporter of the world Zionist movement. In addition, the Zionism also obtains support from the Germany since its offices are led by Warburg, a citizen from Germany. The support from both the U.S and Germany makes it possible for the Zionism to develop Israel as a western state. In 1939 during the World War II the Zionist movement had a total of 1040540 members across 61 countries. At this time Jewish population amounts to 18 million hence increasing the popularity of the Zionism movement. In 1939 elections were made for the ratification of Zionist congress in Geneva.
In conclusion, the establishment of Zionism movement aims at returning Jews to their homeland. The movement is developed by Theodor Herzl and supports the development of Jewish State through congress such as the “28th Zionist congress in Jerusalem in 1968.” Furthermore, this Zionist congress has 5 principles that help in transforming Israel as a western state.
References
Gartner, L.P. (1996). The Zionist Ideology by Gideon Shimoni. The Jewish Quarterly Review New Series,86 (3) 44-445.
Goldschmidt, A., & Davidson, L. (2013). A Concise Histrory of the middle East. Philadelphia, P.A: Westview Press.
Gottheil, R. (1899). The Zionist Movement. The North American Review, 169, (513) 227-236. Read More
Share:
Tags
Cite this document
(“THE GREATER MIDDLE EAST Essay Example | Topics and Well Written Essays - 500 words - 4”, n.d.)
THE GREATER MIDDLE EAST Essay Example | Topics and Well Written Essays - 500 words - 4. Retrieved from https://studentshare.org/history/1649637-the-greater-middle-east

CHECK THESE SAMPLES OF THE GREATER MIDDLE EAST

...The Arabs in the Middle East had quite a strong conquest that was aimed at spreading a new faith to the region and was marred by misery, oppression and massacre. The three events occurred against those that opposed the Arabs and their quest for dominance in the region. The state religion imposed upon the Persians was Islam and conversion to the new faith was the main agenda of the Arabs, which led to the destruction of the traditional creeds and culture. As a result, the Arabs went about their business of conquering the Middle East by commandeering the schools, universities and libraries. This was a strategy that saw the Arabs dominate most of the Middle...
2 Pages(500 words)Essay

...Geography has a powerful role in determining the way in which a given region develops. This can be seen in many places around the globe as distinct geographies result in racial, linguistic, cultural, or economic differences that would otherwise not be present if the unique geographic facets of a region did not push these factors to exist in a certain way. Perhaps one of the most obvious regions in the world where geography has had a profound impact upon the development of culture and economics is with respect to the area that is collectively known as the Middle East; comprising the Fertile Crescent, parts of the Mediterranean coast, the Arabian peninsula, and parts of North Africa. This unique geography...
2 Pages(500 words)Essay

...and the nation of Islam was re-united, albeit under intense inter-clan tension. Following his death, his successor Umar wisely chose to channel this aggression externally by mounting a series of military campaigns against the Persian and Byzantine empires in a bid to expand the largely Arab nation of Islam in what we now consider the Middle East region (Lapidus 21). The Early Expansion of the Nation of Islam This campaign proved successful as the Arab led the nation of Islam, defeated the seemingly militarily superior Byzantine and Persian empires. Their success was based on a number of factors. First among them was that the two major Middle Eastern empires, Persia and Byzantium, were...
2 Pages(500 words)Admission/Application Essay

Explain the origins, Rise and Decline of the Ottoman-Turkish Empire ( 1300s-1918) in the Greater Middle East/ Gulf and its system of government and relation with oppressed ethnic groups (Armenians,Balkan Christians)

... circumstances in the post First World War One scenario made it difficult for the Ottoman Empire to stay existent. References: Goldschmidt, A., & Davidson, L. (2012). A Concise History of the Middle East. Westview Press. Hansen, V., & Curtis, K. (2008). Voyages in World History, Volume 1. Cengage Learning. Hodge, C. C. (2008). Encyclopedia of the Age of Imperialism, 1800-1914. Greenwood Publishing Group. Inalcık, H. (2000). Encyclopedia of the Ottoman Empire. Phoenix Press. Sheehan, S. (2004). Turkey. Marshall Cavendish.... Origin Rise and Decline of the Ottoman Empire The Ottoman Empire is one of the most prolific ruling regimes that can be traced in modern times. It was a governance rule that lasted for over multiple centuries. It had...
5 Pages(1250 words)Research Paper

...The Great Middle East The Great Middle East Ottoman- Turkish Empire spanned for 600 years from c. 1300 to 1918 and as a result it emerged as the largest empire to ever exist in the world’s history. In addition, Turkish tribes established the Ottoman-Turkish Empire in Anatolia. In the fifteenth and sixteenth century, Ottoman-Turkish Empire emerged as the most powerful empire in the world and came into an end in 1922. The leaders of the empire used a traditional system of government that involved the use of dynasty and traditional order. However, due to its strong political system and influence of Islamic religion, it was harsh to the ethnic groups. Most of these groups...
6 Pages(1500 words)Essay

...Effects of Gas/Oil Production of the Middle East over the Past 50 Years Some of the main oil producers in the Middle East include Saudi Arabia, UAE, and Iran. Oil production is said to run almost everything and the production endeavors of these three nations has greatly influenced their success for the last couple of decades (Stevens 6). In these three countries, for instance, the countries has seen an improvement in their international relations with some of the most influential countries of the world such the United States, Britain, Germany and Russia among others. Russia, in particular, has made huge investments in Saudi Arabia to ensure that the future of oil...
1 Pages(250 words)Admission/Application Essay

...Middle East and Number Paper Due Middle East The general impression on the Middle Eastern internal politics is that the same is interconnected within religious fundamentalism beyond national interest. This impression is partially correct because religious belief and internal politics are interconnected within the Middle Eastern context. Besides, this results in the growth of notorious fundamentalist/terrorist groups aiming to extend their influence beyond national boundaries. Within this context, the ISIS’s transformation from Al-Qaeda’s branch to the mastermind behind the formation of Islamic State is critical for the world nations because this transformation proves that extremism can swallow national politics. Thesis statement... : The...
9 Pages(2250 words)Research Paper

Let us find you another Essay on topic THE GREATER MIDDLE EAST for FREE!