Comments (0)
Add to wishlistDelete from wishlist
Cite this document
Summary
In the essay “Athenian Speech on Adherence to the 30 Year Peace Treaty,” the author analyzes the Dalian League in the period between 478 and 431 BCE. The Greeks were very proud after defeating the Persian Empire in the 478 BCE war. This victory gave Greece a lot of self-confidence…
Download full paperFile format: .doc, available for editing
HIDE THIS PAPERGRAB THE BEST PAPER95.8% of users find it useful 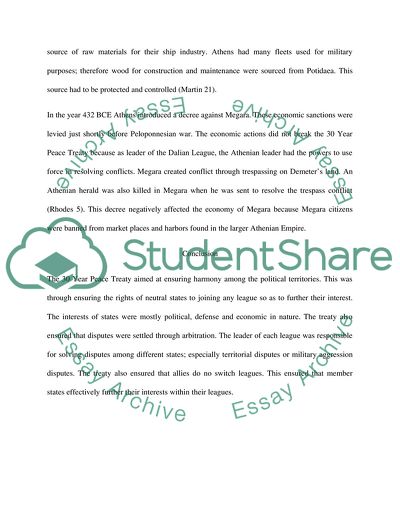 ﻿Athenian Speech on Adherence to the 30 Year Peace Treaty
Introduction
The growth of the Athenian empire and power is directly related to the Dalian League in the period between 478 and 431 BCE. The Greeks were very proud after defeating the Persian Empire in the 478 BCE war. This victory gave Greece a lot of self confidence; and this led the Athenians into political and cultural glory for the following half century (Martin 7). The Athenians immediately after the war embarked on rebuilding their city with special considerations on the fortifications. Themistocles, the Athenian leader ensured that the defense fortifications were effectively built; for future military defense purposes. In the Athenian empire had adequate fleets; these fleets acted as the main source of power.
In the years 433 BCE Athenians assisted Corcyra by defending it against military attacks by Corinth. Athens did not break rules of the 30 Year Peace Treaty because; Corcyra was considered a neutral state and therefore Athens was legally and politically allowed to work with Corcyra on military defense issues (Rhodes 13). Also Corcyra was an ally of Athens, and the treaty explained that no state is allowed to interfere with allies of other states. Therefore, Corinth was not permitted by the treaty to attack Corcyra which was an ally of Athens.
In the year 433 BCE Athens affected a siege on Potidaea. This action did not break the 30 Year Peace Treaty because; Athens considered it a military defense action. The treaty empowered each leader to employ military force in conflict resolution in the alliance. Potidaea was a member of the Dalian League; the League was controlled by the Athenian leader. Athens also wanted to control Potidaea both politically and militarily. This is because the territory served as the main source of raw materials for their ship industry. Athens had many fleets used for military purposes; therefore wood for construction and maintenance were sourced from Potidaea. This source had to be protected and controlled (Martin 21).
In the year 432 BCE Athens introduced a decree against Megara. These economic sanctions were levied just shortly before Peloponnesian war. The economic actions did not break the 30 Year Peace Treaty because as leader of the Dalian League, the Athenian leader had the powers to use force in resolving conflicts. Megara created conflict through trespassing on Demeter’s land. An Athenian herald was also killed in Megara when he was sent to resolve the trespass conflict (Rhodes 5). This decree negatively affected the economy of Megara because Megara citizens were banned from market places and harbors found in the larger Athenian Empire.
Conclusion
The 30 Year Peace Treaty aimed at ensuring harmony among the political territories. This was through ensuring the rights of neutral states to joining any league so as to further their interest. The interests of states were mostly political, defense and economic in nature. The treaty also ensured that disputes were settled through arbitration. The leader of each league was responsible for solving disputes among different states; especially territorial disputes or military aggression disputes. The treaty also ensured that allies do no switch leagues. This ensured that member states effectively further their interests within their leagues.
Works Cited
Martin, T. Ancient Greece: From Prehistoric to Hellenistic Times. Yale: Yale University Press. 2001. Print.
Rhodes, P. The Athenian Empire. Oxford: Oxford University Press. 1985. Print. Read More
Share:
Tags
Cite this document
(“Athenian Speech on Adherence to the 30 Year Peace Treaty Essay - 8”, n.d.)
Athenian Speech on Adherence to the 30 Year Peace Treaty Essay - 8. Retrieved from https://studentshare.org/history/1648698-assignment-4

“Athenian Speech on Adherence to the 30 Year Peace Treaty Essay - 8”, n.d. https://studentshare.org/history/1648698-assignment-4.
Comments (0)
Click to create a comment or rate a document

...to other systems for a period of approximately 4000 years. Hence, democracy has not been perfected yet as regards to other systems as it is relatively newer than the previous forms of rule (Tharley, 1996, pp. 26-28). However, Athenian democracy had its advantages and disadvantages while it prevailed as a system. Beginning in approximately the 5th century B.C., democracy has been practiced in varying forms and with different levels of thoroughness and understanding. However, it was regarded as one of the best systems till date (Laurex, 2006, pp. 167-168). The Athenians thought that the people should be given free will to express their ideas and this was carried out on a ten-day basis in...
6 Pages(1500 words)Essay

...? The Jerry Watson 30-Year Old Murder Case FBI has published a report on 11 Sep. informing the resolution of 30-year-old case involving the murder of Carroll Bonnet. The detectives connected with this case, Douglas Herout and Laura Casey did a remarkable job and were honored with 2012 ‘Latent Hit of the Year Award’ for identifying the murderer. Carroll had been stabbed in her apartment at Nebraska. Later she succumbed to death due to grave injuries. Police collected finger and palm prints from the apartment and bathroom of the victim. The car belonging to victim was stolen and police recovered it from Illinois. Fingerprints from car were also recorded.. However, these initial investigations could not provide any lead towards... the...
5 Pages(1250 words)Research Paper

...but on the political and cultural life of the Athenians. Proxenia in the Articulation of Athens Relations with her Allies As Athens rose to its imperialistic power it was necessary to hold on to many of its allies. It needed to make peace with different nations such that of Persia. It needed to make Sparta recognize the 30 years of peace. It needed to establish alliances to different countries in order to win several wars. Athens implemented policies that could not only reform its own cities but it also made changes on policies concerning their foreign activities however, these provoked war and affected many of its intimate allies as they were...
6 Pages(1500 words)Essay

...The Peace Treaty (Woodrow Wilson's 14 points) and Section # of The Peace Treaty (Woodrow Wilson's 14 points) The First World War had left devastation across the world and many countries were on the brink of social and economic collapse. The allied forces had won the war but had suffered many casualties and had exhausted their resources. But since America had entered the war late it had not suffered much loss. It held a neutral viewpoint of the nations involved in the war. As grievances were high and no nation wished to forgive the opposing nations, America proposed a neutral approach to introduce lasting peace in the world. Woodrow Wilson was the...
3 Pages(750 words)Lab Report

...a test for the democracy in Athens. The death of Alexander the great brought about changes in the system of rule to oligarchy rule. Population increase led to the inability of all citizens to attend discussions and debate and in later years led to the introduction of entry fee and the restriction of people involved in decision making. References: Ancient History (2006) 7 Stages in Athenian Democracy, Retrieved on 25th September, and Available at: http://ancienthistory.about.com/od/governmen1/qt/7stagesdemocrat.htm Clark University Website (2006) Democracy and Dialogue Retrieved on 25th September, Available at: www.clarku.edu/dd/docs/Braulia_Thillet_de_Solorzano.pdf History world (2006) History...
3 Pages(750 words)Essay

History, The Versailles Peace Treaty of 1919

...delegation to the Paris Peace Conference in 1919, offers an important view of the peace process that resulted in the Versailles Peace Treaty of 1919. Significantly, the author deals with the transitional phase between pre-war and post-war diplomacy and throws some light on the Paris Peace Conference. In the book, Nicolson presents his theses in the background of his memory concerning those congested days and offers a convincing explanation of the major consequences of the peace treaty. His main thesis of the book is that “Given the atmosphere of the time, given the passions aroused in all democracies by four...
4 Pages(1000 words)Essay

30 Year Plan of the Greater Adelaide

...Factors that predict adherence Affiliate Factors that predict adherence Adherence is one of the most strategies in health and medical fields that reduce the cost of medication and improve the quality of health care. Adherence is defined as the extent of peoples willingness and ability to comply with health and medical advice. People should consider some factors in order to gain maximum benefit from adherence. The health or medication information must be valid and patients should carefully follow instructions and advices. Failure to comply with given prescriptions may lead serious health problems. There are several prevailing factors that predict...
2 Pages(500 words)Essay

...Covenants and Treaties Introduction A covenant is a bond or an agreement between two parties on matters of mutual concern (Harris and Platzner 16).Covenants are usually agreements between two or more persons or groups to do or not to do something specified. Covenants have certain elements that have to be in existence to make the agreement binding. The elements are the presence of a preamble, a stipulation and a prologue. Conditions have to be given and witnesses have to be present. Moreover, there has to be a sign that marks the conclusion of the covenant. In the Old Testament, God made various covenants with different people. The following is a list of these covenants. The covenants and their significance Adamic...
1 Pages(250 words)Essay
sponsored ads
Save Your Time for More Important Things
Let us write or edit the essay on your topic "Athenian Speech on Adherence to the 30 Year Peace Treaty" with a personal 20% discount.
GRAB THE BEST PAPER

Let us find you another Essay on topic Athenian Speech on Adherence to the 30 Year Peace Treaty for FREE!