Comments (0)
Add to wishlistDelete from wishlist
Cite this document
Summary
“Night” a masterpiece by a Jewish author Eliezer, who himself was a teen at the time of brutal incident of holocaust and lived in his hometown of Sighet, in Hungarian Transylvania. Eliezer in his childhood was of a student of Torah (the revealed book of Jews) and Cabbala…
Download full paperFile format: .doc, available for editing
HIDE THIS PAPERGRAB THE BEST PAPER94.5% of users find it useful 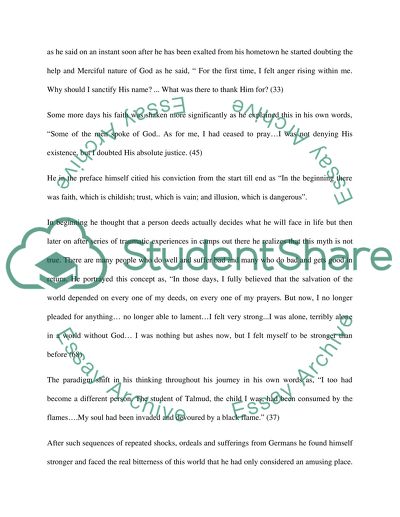 Night: An Analysis “Night” a masterpiece by a Jewish Eliezer, who himself was a teen at the time of brutal incident of holocaust and lived in his hometown of Sighet, in Hungarian Transylvania. Eliezer in his childhood was of a student of Torah (the revealed book of Jews) and Cabbala (which is a set of guidelines of Jewish spirituality).
He used to learn certain religious aspects from his teacher Moshe the Beadle and later his teaching class was cut short, when his teacher was deported. After a few months when Moshe returned he told everyone a very horrifying tale i.e the Gestapo (i.e. the German secret police force) took charge of his train, guided everyone into the forest, and thoroughly butchered almost every one of them. Nobody believed Moshe, who was declaimed lunatic.
In beginning as a juvenile blood Eliezer only viewed world as a place of “eat, drink, perform rituals and be merry” but with each passing day life teaches him certain lessons that forced him to change his outlook about life.
Even in the start when Germans were taking over their vicinity, he did not consider them as their enemies as he quoted himself that “Still our first impressions of the Germans were rather reassuring…. made no offensive remarks, and sometimes even smiled at the lady of the house”. (9) But later that changed drastically as “So many crazed men, so much shouting, so much brutality… sticks in hand, striking anywhere, anyone, without reason. (34, 35)
In the whole story his perspective about God and world changed drastically. With each day passing by his views about worldly affairs and role of God in this affairs have been tainted to a greater extent. In beginning He was a very religious boy who was losing trust on God day by day as he said on an instant soon after he has been exalted from his hometown he started doubting the help and Merciful nature of God as he said, “ For the first time, I felt anger rising within me. Why should I sanctify His name? ... What was there to thank Him for? (33)
Some more days his faith was shaken more significantly as he explained this in his own words, “Some of the men spoke of God.. As for me, I had ceased to pray…I was not denying His existence, but I doubted His absolute justice. (45)
He in the preface himself citied his conviction from the start till end as “In the beginning there was faith, which is childish; trust, which is vain; and illusion, which is dangerous”.
In beginning he thought that a person deeds actually decides what he will face in life but then later on after series of traumatic experiences in camps out there he realizes that this myth is not true. There are many people who do well and suffer bad and many who do bad and gets good in return. He portrayed this concept as, “In those days, I fully believed that the salvation of the world depended on every one of my deeds, on every one of my prayers. But now, I no longer pleaded for anything… no longer able to lament…I felt very strong...I was alone, terribly alone in a world without God… I was nothing but ashes now, but I felt myself to be stronger than before (68)
The paradigm shift in his thinking throughout his journey in his own words as, “I too had become a different person. The student of Talmud, the child I was, had been consumed by the flames….My soul had been invaded and devoured by a black flame.” (37)
After such sequences of repeated shocks, ordeals and sufferings from Germans he found himself stronger and faced the real bitterness of this world that he had only considered an amusing place. He described his own and his fellow Jews condition as follows, " We were masters of nature, masters of the world … Stronger than cold or hunger … we were the only men on earth " (83)
The height of pain and suffering made him admit the cruel nature of this world towards some as he narrate the incident of the death of his father in these words, "I did not weep, and it pained me that I could not weep…I had no more tears”. (106)
Thus the novel revolves around changing mindset and perspective of Elie Wiesel about the pain, suffering, role of God, dwindling and heinous nature of human being and the courage and strength to fight all the anguishes and distresses.
References:
Wiesel, E. (2008). Night. London: Penguin. Read More
Share:
Tags
Cite this document
(“Night elie wiesel Admission/Application Essay Example | Topics and Well Written Essays - 500 words”, n.d.)
Night elie wiesel Admission/Application Essay Example | Topics and Well Written Essays - 500 words. Retrieved from https://studentshare.org/history/1647653-night-elie-wiesel

...?Running Head: English A Response to Elie Wiesel’s Night A Critique Elie Wiesel, in his grim depiction of the Holocaust in Night, tries to stir up a sympathetic response in the reader to the experience of Holocaust survivors. With no loathing, Wiesel wants these atrocious events to emotionally and psychologically disturb the readers. He wants the reader to see him/herself as both the tormenter and the sufferer in order for him/her to understand that these two personalities are possible in all individuals. While putting into life his work, Wiesel, maybe unintentionally, created his role: him being the main...
2 Pages(500 words)Book Report/Review

...Philosophy February 27, Topic: Night by Elie Wiesel. Introduction: A small book of one hundred odd pages wins the Nobel Prize. Going by the contents, it depicts the story of four grave years of the century that concern the humankind. It has emerged straight out the heart of Elie Wiesel. This is a story of a great human tragedy and those who are adversely affected on all counts during and after World War II will recall with horror, the mass of flesh of the rotting bodies that once belongs to their near and dear ones. Personally for Wiesel, death threatens to overpower him at every moment between those years (1941—1945).A strong element of...
4 Pages(1000 words)Essay

Eliezer's Struggle to Keep his Faith in God

...Task “Eliezer's Struggle to Keep his Faith in God” The autobiographical novel Night by Elie Wiesel is an excruciating and momentous exploration of one young man’s experiences during the Holocaust. Elie, the raconteur, is a deeply religious and passionate child growing up in Eastern Europe (Bloom, 37). Elie is a staunch Jew who studies Tora during the day and the Cabala at the night. Elie remained closer and merciful to God at all times. Elie expresses deep zeal God’s faith by lamentation in the synagogue when praying (Bloom, 34). At the age of fifteen Elie witnesses painful scenery, in...
3 Pages(750 words)Essay

...? Night by Elie Wiesel ‘Night’ refers to a book by Elie Wiesel. The book documents the survival as a teenager in the Nazi death camps. The author, using the book, provides a memoir of his terrifying experience at the hands of the Nazi. The author is a holocaust survivor, author, and scholar. Wiesel got born in Sighet, Transylvania, in the year 1928 (Marion & Wiesel, 2012). The author was 15years of age when he together with his family got deported to Auschwitz and separated. After World War II, the author undertook his studies in Paris and worked for a French newspaper as a journalist. Prior to writing...
4 Pages(1000 words)Book Report/Review

...Your Number 28 March 2007 Night by Elie Wiesel Night, by Elie Wiesel, originally publishedin French in 1958 (Les Editions de Minuit) is among the best-known Holocaust narratives (I read an English edition, 1982, Bantam Books). A powerful, gripping book, slender, but packed with the raw human emotions of fear, despair, and terror, its true horror is that every word is true. Every event between its covers is an historical event experienced by a teenage boy who survived a world where death was an escape. Wiesel speaks with the authority of a survivor who has seen the worst humanity can offer. When his friend, Moshe the...
5 Pages(1250 words)Book Report/Review

...Your Book Review of Elie Wiesel’s “Night” This book is an autobiography of Elie Wiesel that essentiallytells the story of a young Jewish boy during World War II, and his struggle to emerge from the horrors of the Holocaust as a whole person. Elie and his family were living in Germany when the Holocaust began, and, as Jews, they were arrested in 1944 and kept captive in a place Elie describes as the “ghetto.” Soon after their arrest, Elie and his family were transported to the concentration camp in Birkenau where he and his father were separated from his mother and sister—males were sent to one camp,...
11 Pages(2750 words)Essay

...﻿Night by Elie Wiesel Introduction: A small book of one hundred odd pages wins the Nobel Prize. Going by the contents, it depicts the story of four grave years of the century that concern the humankind. It has emerged straight out the heart of Elie Wiesel. This is a story of a great human tragedy and those who are adversely affected on all counts during and after World War II will recall with horror, the mass of flesh of the rotting bodies that once belongs to their near and dear ones. Personally for...
4 Pages(1000 words)Essay

... and emotional state are conflicting as at one point, he ran away from his father with thoughts that he would not find him again as he was draining him of his energy to survive. In conclusion, it is quite clear that Elie’s perception of the world have changed both mentally/emotionally and religiously. He becomes a transformed person after his camp experiences whereby he is left broken. Reference Wiesel, E., & Wiesel, M. (2011). Night.... History History The Holocaust is an adversity, which prompted the various situations and experiences that changed the way Elie Wiesel viewed the world. Elie Wiesel tends to change his perception of the world in response to his camp...
2 Pages(500 words)Essay

...Admission/Application Essay, History How Wiesel’s views of the world fundamentally changed between the beginning of the story and the end. The Holocaust proffered one of the most upsetting theological predicaments of the twentieth century. Elie Wiesel was one of the survivors from the Nazi concentration camps where death lurked at every moment of his existence. Wiesel relentlessly evaluated and questioned His relevance to the suffering humankind. His perspective of the Holocaust, in the four most difficult years of history of humankind (1941-1945) direly related to his grim experiences....
2 Pages(500 words)Admission/Application Essay

...some food to beat hunger and stay alive. The prison foreman, Franek came to know about Elie’s gold crown and demanded it. On his refusal, Franek beat his father. And in the end, he gave the crown. Elie happened to witness Idek having sex with a Polish girl. Idek lashed him ruthlessly and warned him of grim consequences if he uttered a word about the sex episode. During an air raid two cauldrons of soup were left unattended. A prisoner edged to get them, but was shot before he consumed a part of it. 4. Discuss your choice in Night In his Nobel Prize Acceptance speech Wiesel declared, “As long as one dissident is in prison, our freedom will not be true. As long as...
7 Pages(1750 words)Book Report/Review
sponsored ads
Save Your Time for More Important Things
Let us write or edit the admission/application essay on your topic "Night elie wiesel" with a personal 20% discount.
GRAB THE BEST PAPER

Let us find you another Admission/Application Essay on topic Night elie wiesel for FREE!