Comments (0)
Add to wishlistDelete from wishlist
Cite this document
Summary
Still, importance given to martial arts does not hinder the directors from making use of their personal freedom. To be specific, some Chinese directors choose martial arts as the main theme…
Download full paperFile format: .doc, available for editing
HIDE THIS PAPERGRAB THE BEST PAPER93.8% of users find it useful 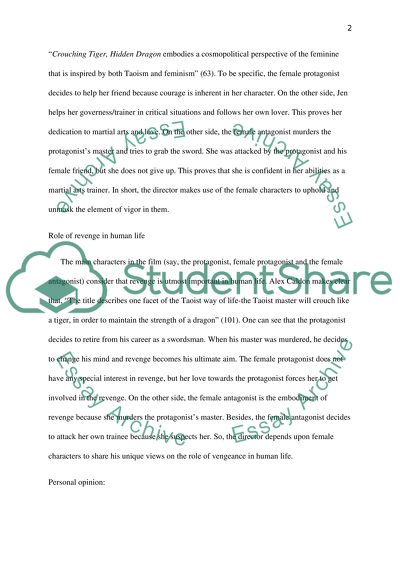 Crouching Tiger, Hidden Dragon by Ang Lee Chinese films are well-known for the inculcation of martial arts within cinematography. Still, importance given to martial arts does not hinder the directors from making use of their personal freedom. To be specific, some Chinese directors choose martial arts as the main theme and try to unveil the secrets behind human relationships. Thesis statement: The director (Ang Lee) makes use of the main characters in the movie named as Crouching Tiger, Hidden Dragon to unearth feminine capability and the role of revenge in human life.
Plot summary:
The film’s plot is related to the possession of a sword, named as Green Destiny. The protagonist (Li Mu Bai) is a swordsman and the female protagonist (Yu Shu Lien) is female warrior. Both of them travels to Beijing to gift the sword to another person, named as Sir Te. Eventually, they meet female antagonist (Jade Fox), the mastermind behind the protagonist’s mater’s murder. The female antagonist and another female character, named as Jen, steal the sword. But, the protagonist recovers his sword and kills the female antagonist, but he succumbs to death. In the end, the Jen commits suicide because she realizes the differences between imagination and actuality.
Review
This section is further divided into: portrayal of femininity in the film and role of revenge in human life.
Portrayal of femininity in the film
In the film, the female characters never face marginalization because they are portrayed as the embodiment of courage, dedication, and self-confidence. Kin-Yan Szeto states that, “Crouching Tiger, Hidden Dragon embodies a cosmopolitical perspective of the feminine that is inspired by both Taoism and feminism” (63). To be specific, the female protagonist decides to help her friend because courage is inherent in her character. On the other side, Jen helps her governess/trainer in critical situations and follows her own lover. This proves her dedication to martial arts and love. On the other side, the female antagonist murders the protagonist’s master and tries to grab the sword. She was attacked by the protagonist and his female friend, but she does not give up. This proves that she is confident in her abilities as a martial arts trainer. In short, the director makes use of the female characters to uphold and unmask the element of vigor in them.
Role of revenge in human life
The main characters in the film (say, the protagonist, female protagonist and the female antagonist) consider that revenge is utmost important in human life. Alex Caldon makes clear that, “The title describes one facet of the Taoist way of life-the Taoist master will crouch like a tiger, in order to maintain the strength of a dragon” (101). One can see that the protagonist decides to retire from his career as a swordsman. When his master was murdered, he decides to change his mind and revenge becomes his ultimate aim. The female protagonist does not have any special interest in revenge, but her love towards the protagonist forces her to get involved in the revenge. On the other side, the female antagonist is the embodiment of revenge because she murders the protagonist’s master. Besides, the female antagonist decides to attack her own trainee because she suspects her. So, the director depends upon female characters to share his unique views on the role of vengeance in human life.
Personal opinion:
I consider that this film unveils the relationship between enmity and revenge. I like this film because the director does not hinder the free flow of human emotionality. For instance, almost all the main characters never try to cover up their emotions, but freely involve in relationships. In addition, the parallel themes in the film, i.e., love affair between main characters, uplift the film beyond a common martial arts film.
Summing, the director does not try to marginalize the female characters, but projects them as main characters with valor, devotion, and self-confidence. This is utmost important because womenfolk face marginalization in the modern society. The director shares his views on the role of revenge in human life, but does not neglect the scope of emotionality (say, love) in human life. In short, the director does not try to exaggerate his characters, but helps the viewers to view them from a different perspective.
Works Cited
Caldon, Alex. The Quest for Truth. Coventry: Alex Caldon, 2007. Print.
Szeto, Kin-Yan. The Martial Arts Cinema of the Chinese Diaspora: Ang Lee, John Woo, and Jackie Chan in Hollywood. U.S.: SIU Press, 2011. Print. Read More
Share:
Tags
Cite this document
(“Crouching tiger, hidden dragon by Ang Lee Movie Review”, n.d.)
Crouching tiger, hidden dragon by Ang Lee Movie Review. Retrieved from https://studentshare.org/history/1643664-crouching-tiger-hidden-dragon-by-ang-lee

...?Ang Lee’s 'Chinese Authenti in his Transnational Films Using a translational approach, Ang Lee’s, the Chinese movie director, has produced Chinese martial arts films that have become successful in the movie theatres. These internationalized/hybridized films are appreciated for their aesthetic merits. Take for example his 2000 ‘Crouching Tiger, Hidden Dragon’ film. The film was produced in collaboration with the US counterparts and has received a lot of attention and applauding among the American movie lovers. The movie has sold more in the American film market than the Chinese film market....
6 Pages(1500 words)Essay

...?Topic Crouching Tiger, Hidden dragon by Ang Lee Introduction The movie Crouching Tiger, Hidden dragon is an American Chinese movie which is directed by Ang Lee and has taken him to a new heights in the cinema world. This movie depicts the traditional martial arts, drama and natural scenic beauty to a great extend. This movie talks about the ancient miraculous instances of Chinese culture and the stupendous warrior nature of Chinese men wherein they float in the air, skim in water in, fights along trees and roof tops in the battle. As per...
5 Pages(1250 words)Essay

...?Full The Untold Story of Li Mu Bai and Cheng Police inspector Tsai, the policeman who traced Jane Fox, was summoned by the latter to Yellow Hill where she met him and the father and daughter tandem who were seeking to avenge their loved one who was killed by Fox. The woman wanted to get rid of them because they were endangering her secret to being revealed. While they were fighting, Li Mu Bai came to their rescue. It was later revealed that Jane Fox disguised as a nun who went to the Wudan training center, aiming to steal the secret training manual of master Li dan Pen. Recognizing Bai, Fox was exhilarated to be face to face again with the renowned warrior of China. They continued to fight until Bai caught Fox in a position where...
4 Pages(1000 words)Essay

.... All the more, there will a deliberative approach on how globalization is considered to be one of the major factors that led to production of the said film. The film Crouching Tiger Hidden Dragon is a film by Ang Lee intended to highlight and showcase the significant things about Chinese culture and to present it to the world and this is considered to be break for him.1 In this film, he has focused more on incorporating different Chinese cultural elements all packed in to one. The film revolves around the story of “two warriors in pursuit of a stolen sword and a notorious fugitive are led to an impetuous, physically-skilled, teenage...
20 Pages(5000 words)Essay

...to grasp it securely. Li Mu-bai tells Shu-Lien that before his retreat was over, he had to let go off the thing in his mind which was the Green Destiny and only then he could gain peace and freedom. His sword had meant his life to him as it was what made him famous and such a dignified person. He wanted to retire from the sword fighting and thus he must have passed on his sword to someone and if he does this, he will get the Tao. The film is an influential story depicted through the impactful characters that portray wisdom, truth, tradition and symbolism. Each character has an important role in the film. With the relation to the martial arts, the characters depict their power, beliefs and peace of mind. The film ends with a fight in...
6 Pages(1500 words)Essay

...﻿ Hidden Intellectualism The hidden intellectualism by Gerald Graff is the article where the author tries to explore how the students who do not perform well in school are inherently not intellectuals. This is based on the street smarts that most students pose when they are out of the school. He explores the way the street marts are just, but academic pursuits, and not intellectuals. He asserts that people have the cultural respect to the education that is institutionalized and not the education outside the institution (Graff, 2010). He presents the way individuals view the street marts to be non-academicians and value the education, basing on the academics, mind very narrowly focusing on the subjects...
4 Pages(1000 words)Essay

The wedding banquet by Ang Lee

...The Wedding Banquet by Ang Lee The lack of acceptance faced by homosexuals is a burning issue in the mainstream society because the public considers the same as immoral. Still, some directors inculcate this theme in their movies and create awareness on homosexuality among the mass. Ang Lee is one among the directors who consider that directors have social responsibility in general. Thesis statement: In the movie named as The Wedding Banquet, The director (Ang Lee) makes use of the theme of homosexuality and cultural difference to prove that how different cultures (say, Eastern and Western) assess and determine human relationships in...
2 Pages(500 words)Movie Review

...Tiger Tiger by Nalini Jones is a story that deals with many aspects of life in the modern world where individuals tend to live great distances from their families and rarely see them. It is a story which reveals Essie’s desperation to be with her daughter and granddaughters for a little while longer during their vacation in India so that the emptiness that she has come to occupy her life can be brought to an end, even though briefly. Therefore, this is a story of self-discovery because it shows a woman’s determination to keep her family close to her so that she can be able to protect them from whatever circumstances that might hurt them. Tiger shows how, in the modern world, as...
4 Pages(1000 words)Essay
sponsored ads
Save Your Time for More Important Things
Let us write or edit the movie review on your topic "Crouching tiger, hidden dragon by Ang Lee" with a personal 20% discount.
GRAB THE BEST PAPER

Let us find you another Movie Review on topic Crouching tiger, hidden dragon by Ang Lee for FREE!