Explain the paradox of slavery and freedom, and how slavery and ideals of freedom could coexist in North America - Essay Example

Comments (0)
Add to wishlistDelete from wishlist
Cite this document
Summary
Those who were slaves in the past are now “supposedly” free but slavery is still being practiced in North America in various other forms.
Initially,…
Download full paperFile format: .doc, available for editing
HIDE THIS PAPERGRAB THE BEST PAPER96% of users find it useful 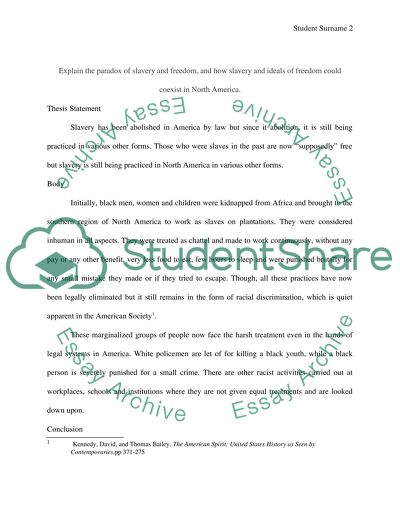 Extract of sample "Explain the paradox of slavery and freedom, and how slavery and ideals of freedom could coexist in North America"

“Explain the Paradox of Slavery and Freedom, and How Slavery and Ideals Essay”, n.d. https://studentshare.org/history/1643457-explain-the-paradox-of-slavery-and-freedom-and-how-slavery-and-ideals-of-freedom-could-coexist-in-north-america.
Comments (0)
Click to create a comment or rate a document

CHECK THESE SAMPLES OF Explain the paradox of slavery and freedom, and how slavery and ideals of freedom could coexist in North America

Definitions of Freedom, Servitude and Slavery Change in Colonial America

The Underground Railroad from Slavery to Freedom

...the changes in the government that led things to where they are now. Foner even states: “eventually, they would be accorded the right to self-government, although no one could be sure how long this would take. In the meantime, 'empire' was another word for 'exploitation'” (Give Me Liberty! 656). For one, varying reasons were behind the formation of the British colonies. Lord Baltimore, William Penn, and a group of proprietors were given full reign to establish their governments in Maryland, Pennsylvania, and North and South Carolina (Morgan 41). Virginia was taken over by some merchants from London. Plymouth, however, was formed by men who were after the concept of religious...
6 Pages(1500 words)Essay

...? SLAVERY IN LATIN AMERICA History and Political Science, Essay Introduction In the history of Latin America, millions of Africans were captured and shipped to engage in slavery. In fact, numerous literatures have been written to account for these events and facilitate understanding of slavery in Latin America. One of these literatures is a book titled “Black in Latin America” by Henry Louis Gates, which has been selected as the primary source for analysis in this essay. In this case, this analysis will facilitate development of a substantial discussion on the topic concerning slavery in Latin...
4 Pages(1000 words)Essay

Slavery and Freedom: The American Paradox

...England and the American colonies during the late period of British rule in the Americas, Morgan argues that the dual and polarizing concepts of slavery and freedom were both “intertwined and interdependent, the rights of Englishmen supported on the wrongs of Africans...The American Revolution only made the contradictions more glaring” (26). Thus, while the American revolutionaries sought to wrestle the bonds of British colonial rule through an appeal to the universality of man and the natural human rights which demand freedom, liberty and independence from a foreign ruler. Ironically, the United States is based upon these ideals yet many Americans...
2 Pages(500 words)Assignment

Political Economy of Slavery/Freedom in the Anglo-America Colonies

...that it was steered by people’s urge to better their economic conditions and the disheartening unemployment that was threatening to engulf most colonies. The reading on colonial economy ostensibly illuminates and informs the paradox of economic freedom and slavery that Edmund Morgan elucidates in his writings (Morgan 99). Racism, exploitation and oppression plummeted the economic strength of Americans and hampered the growth of democracy and liberty (Walton & Hugh 46). The whim of the market worked ominously to perplex the social, political and economic balance. However, was controlling the economic markets through policy formulation and implementation apposite in improving the overall...
1 Pages(250 words)Book Report/Review

...Progress, Freedom and Slavery Henry David Thoreau was a wise man who saw the wrongs of the American society in the middle of the nineteenth century and tried to stand up to them. The activist found his own way to make the government stop evil policies, which were the Mexican-American war and slavery. Thoreau had quite a specific view on the concept of civil disobedience. It is noteworthy that the thinker believed that the government as well as the state could be described as a machine that used people as its tools in reaching some goals. The activist also thought that the means of influence on the machine were limited and almost non-existent. Thoreau saw voting as a tool...
1 Pages(250 words)Essay

...From Slavery to Freedom After a long period of searching throughout the world, Doro finally gets to find his lost friend and slave, Anyanwu who had earlier turned herself into a dolphin and lived in waters for quite a long period of time, afraid of Doro’s injustices. By then Anyanwu had already formulated her own village that she was in charge of, with siblings possessing extraordinary powers such as the power to convert from one bodily form to another and from human into animal characters. Once again, due to the fact that Anyanwu is a woman and African in particular, Doro takes full control and wins her back to himself and exercises full control on whom she breeds with in order to obtain a wide range of...
2 Pages(500 words)Coursework

... “cheap labour” claim, which maintained that slavery was repetitive, incompetent and created less economic logic. This practice to bring freedom, called a Subversive Railroad, received actual momentum during 1830 and even though estimates differ extensively, it might have assisted everywhere from 50,000 to 200,000 captives attain freedom (Guelzo, 2004). The achievement of this Subversive Railroad aided increase abolitionist emotions within North America. Thus, from the above explanation, I believe that it was slavery then freedom in American colonies. References Guelzo, A. C. (2004). Lincoln's Emancipation Proclamation: The end of slavery in America. New York: Simon & Schuster.... ﻿Which came first in the American colonies, a culture of...
1 Pages(250 words)Essay
sponsored ads
Save Your Time for More Important Things
Let us write or edit the essay on your topic "Explain the paradox of slavery and freedom, and how slavery and ideals of freedom could coexist in North America" with a personal 20% discount.
GRAB THE BEST PAPER

Let us find you another Essay on topic Explain the paradox of slavery and freedom, and how slavery and ideals of freedom could coexist in North America for FREE!